I have been a bit worried since I brought home this big conglomeration of VHF resonators, isolators, harmonic filters, etc.  One worry that I could do something about was to get one of the resonators and try it out at 2-meter frequencies.

I had been racking my brain for a way to do that.  I have VHF transmitters for the amateur bands.  So I started out with that.  But I was not sure which way to tune the thing.  And the band-pass notch is so sharp that I was likely to miss it.   What I needed was a wide-ranging signal source.

So then I thought about my old grid-dip meter.  A grid dip is an oscillator.  You hold it close to a resonate circuit, adjust the oscillator frequency and look for a dip.  A dip means that you have found the point of resonance.  The way the circuit is built that causes a “dip” in the “grid”, hence it is a grid-dip meter.  Sure enough, my GDO has the capability to go up to about 450 Mhz.

I put an antenna-ish loop on one side of my VHF resonate cavity and on the other side I put a 50 Ohm dummy load.

I played around with that a little bit trying to couple the GDO and the loop, and I could not find a dip.  The problem there was that the notch is so sharp and the GDO tunes over a wide range, so I was missing it.  In my experience using the GDO in a dipper manner is hit and miss.  Sometimes I find the dip and sometimes I don’t.

Then I finally had an idea that worked.  I hooked up a sensitive RF power meter  (the blue box on the bench in my picture) in place of the 50 Ohm dummy load.  I just used the GDO as an oscillator and didn’t bother to look for the dip.  It worked.  I could see a very sharp spike tuning past one particular frequency.  I adjusted the tuning plunger and found that I could easily put this VHF resonator in the 2-meter amateur band, or quite a bit below or above.  I ended up tuning from about 130 Mhz to above 180 Mhz and I did not go to the uttermost end of travel of the tuning plunger in either direction.

So that was kind of fun. I figured out a way to roughly measure the resonate frequency. And I confirmed that these resonators work on the 2-meter ham band.  And–I now know that I can use my GDO as a test oscillator well into the VHF band  (Not as good as a real signal generator, but it worked.)

Here’s the picture of my lash-up.  The beige box is the GDO.  The black canister thing is the VHF cavity  (it is about 3 feet high in this picture).  My single-wire antenna-ish loop is hanging out of the left port on top of the can.  You can’t see the output port, it is behind the GDO. 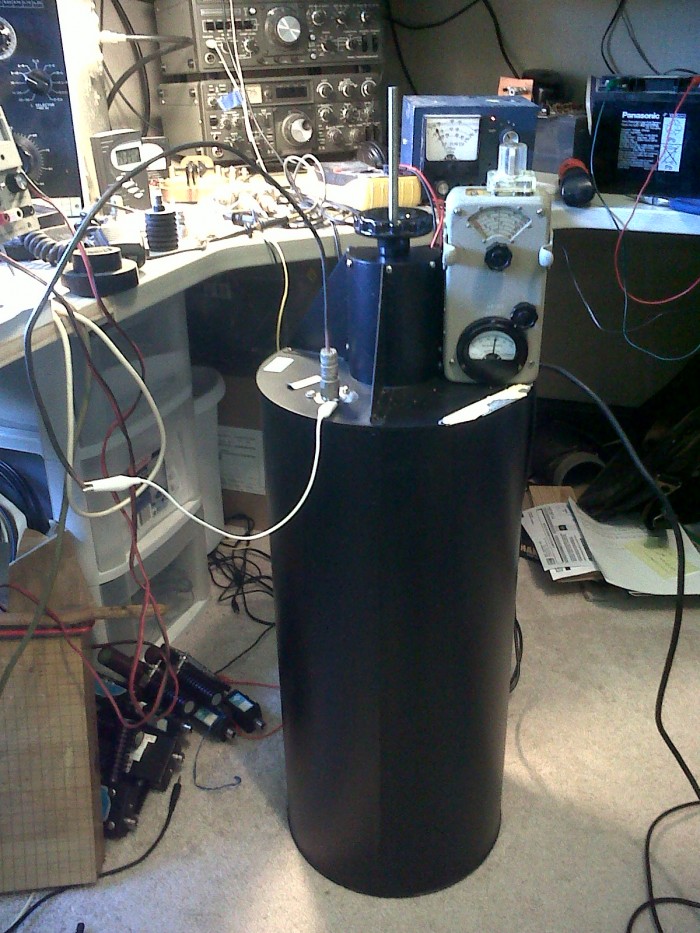