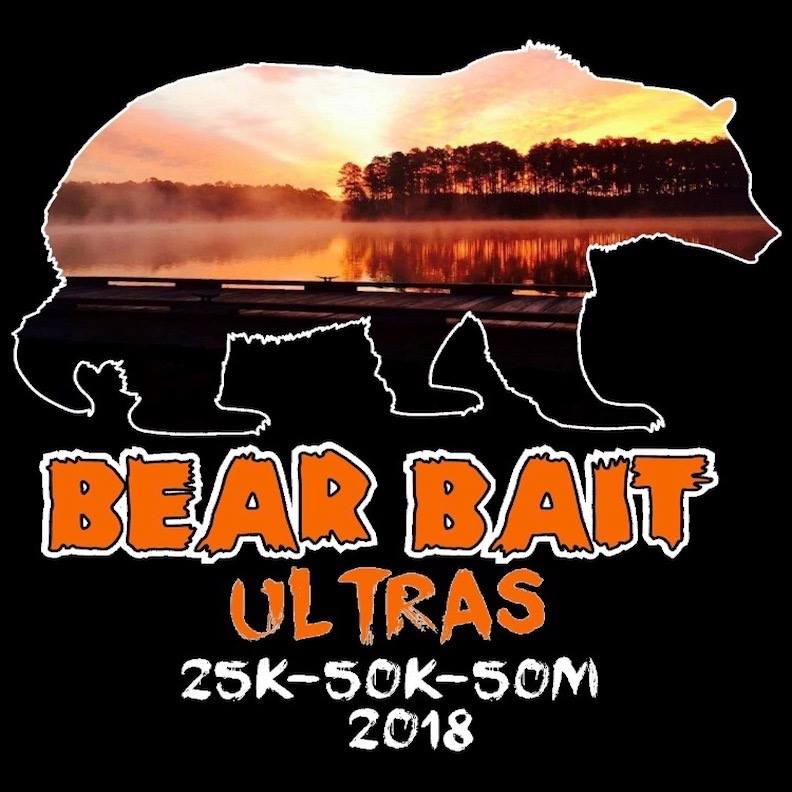 I have to admit I was feeling a little smug driving down to Florida with my sister a week ago today.  My friends back home in Mississippi were dealing with a surprise snowfall and we were driving in warm temps and sunshine.

We’re going to do a bit of TMI here to let you know how I was, toeing the line at Bear Bait.

The night before we traveled, I had woke up a few times with something I’ll call pressure in my lower abs/pelvic region.  I thought it was odd but it wasn’t bothering me so the next morning MFH (My Favorite Husband) loaded up the car, I picked up my sister and we had a great drive to Florida.

When we arrived at the resort, that pressure was still there AND it was getting uncomfortable.  I chalked it up to my jeans being too tight for the trip or something silly like that.

We unloaded the car, grabbed some dinner then went to bed.  The next morning when I got up I knew…

I was still functioning okay but I knew if I didn’t find a Doc and get on antibiotics that day, I wouldn’t be racing on Saturday.

We scrambled most of Thursday finding a walk in clinic.  I peed in a cup.  He said, “UTI” and wrote out a script for antibiotics.  We found a pharmacy, filled the script and I started the treatments asap.

Race day morning, I was feeling a *little* better but not amazing.  Nothing for it but to lace up my running shoes and hit the trails!

Whoever heard of trying to run a 50 miler with an UTI?  I guess there’s a first time for everything, right?

Some of my Renegade Endurance teammates were at this race and we were able to grab a quick pre-race pic.

Serious athletes, these RE guys and they ran strong!  Super proud of every one of them!!!

I was also there with some of my friends from the #MScoffeerunners.  Best people in the world and very gifted runners!  We didn’t get a pre-race pic but we had our team tent up for the very first time!

My sister was there as my crew.  She did amazing!!!  This was her very first time at an ultra and her first time ever crewing.  We had chatted about what needed to be done,  what kind of things to expect…that kind of thing.  She made a list, organized the drop bags so she knew where everything was.  She also voluntarily crewed for all the other #MScoffeerunners.  HUGE shout out to my sister!  BOOM!!!

It was a very cold Florida morning.  I don’t think we got above 35* the entire day?  The wind chill was in the single digits the entire day.  If you kept moving, it was okay but you didn’t dare slow down or else that cold would seep into your bones.  #motivation

I came through the first two loops strong and felt great!  My Tailwind Nutrition worked perfect the entire 13 hours I ran.  I never bonked.  My tummy was happy all day.  No GI problems.  I was a happy runner!  Thank you, Tailwind!!!

I had lubed up carefully with my ChafeX paying special attention to my feet.  I knew there were areas of standing water on this course.  I also knew I had to run 13  four mile loops and that meant going through a lot of icy cold water.  I am very happy to say I had zero chafing or blisters.  YAY for ChafeX!

XOSKIN base layer is fabulous for helping control body temp.  Can’t beat it for keeping you cool on hot days and comfy on cold days!  Shout out to XOSKIN!

I elected to wear my Altra Timp for this race.  The Timp has only been out about 6 months but I am head over heels in love with this shoe. Happy feet for the 11 loops I completed last Saturday.  Thank you, Altra Running!!!

My SPIbelt kept my bib in place and I carried all the little extra goodies I might need to grab easily in the pouch.  I’ve been hooked on SPIbelt since my first marathon in 2013.  Terrific product!!!

So, back to the race:

Most you probably remember the challenges I’ve been having with my vision when running on the trails?  This was my first ultra running with glasses/protective eye-wear.  There is no prescription in what I wore Saturday.  They’re just an inexpensive pair of shooting glasses from Walmart.

I elected to wear the glasses because my goggles don’t have any peripheral vision and I really wanted that for Saturday.

The combination of the eye drops and the glasses was working beautifully!!!  YAY for that success story!

*fun thing on the levee during the race:

Just a few pics of the trail: 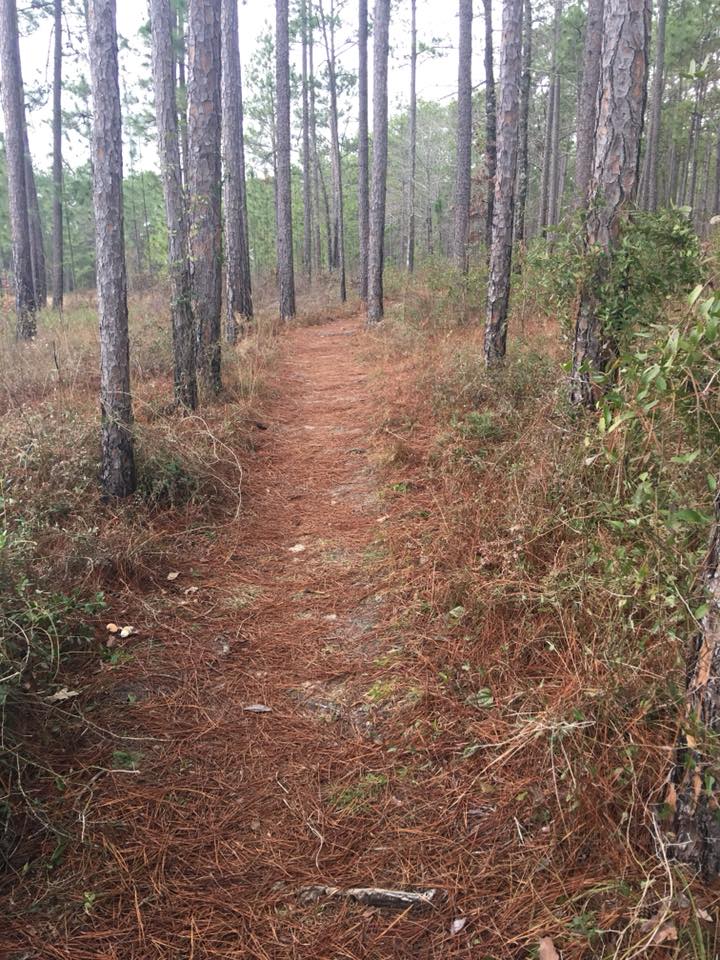 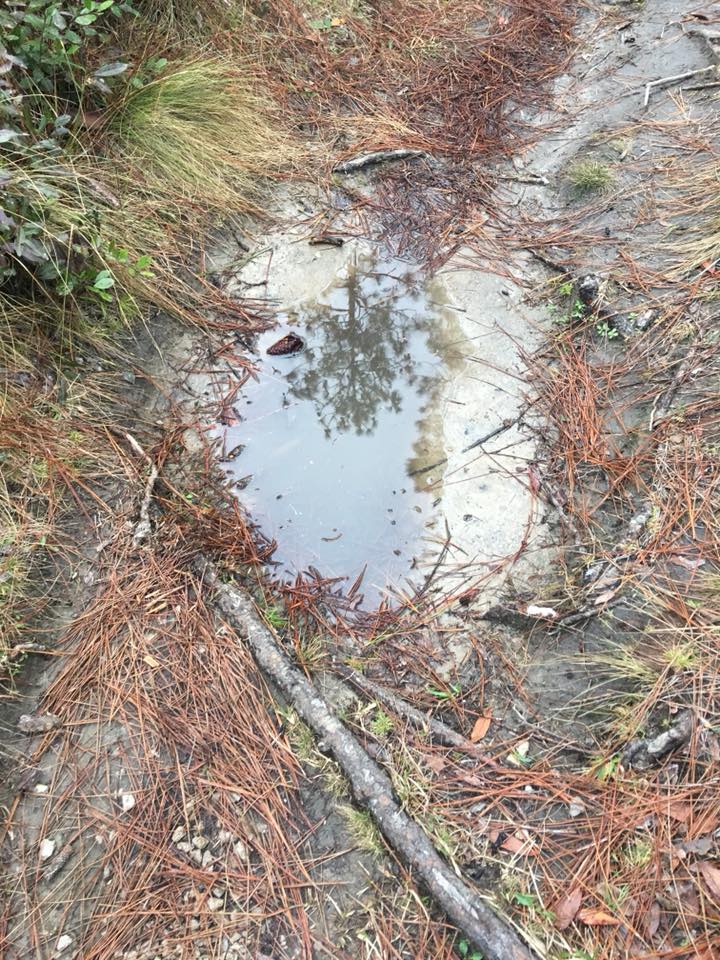 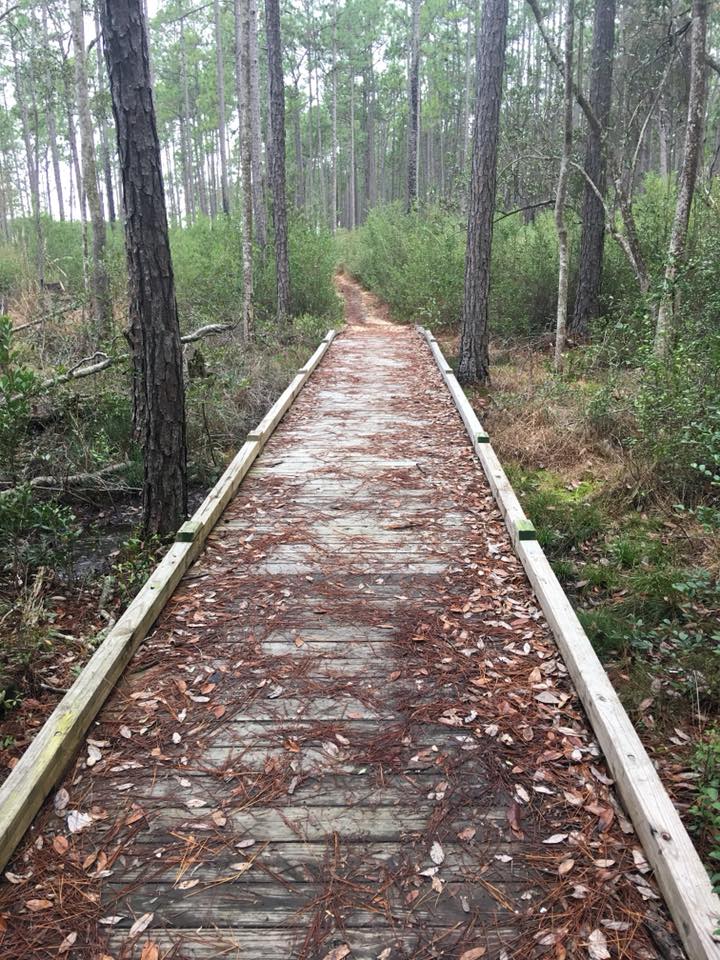 *Trivia:  A friend of mine decided on his last loop to pick up and carry one leaf for every bridge he crossed.  He crossed 9 bridges on that one loop.  I ended up running 11 loops so that means I crossed 99 bridges!  That’s a lot of bridges.

After a while, when you’re running a zillion loops, you tend to lose count as to what loop you’re on.  You resort to #RunnersMath to try to figure it out.  Even with the aide of my Garmin, I was wrong.  I’m #MathChallenged.  Lucky for me, the awesome people at the S/F kept track of it and would tell you when you crossed the timing mat where you were.

HUGE shout out to the amazing volunteers at this event!  This is a top notch race and I very highly recommend it!!!

Around noon-ish I shed my jacket.  I knew it would be getting pretty chilly when the sun went down and I wanted to look forward to the promise of a jacket when it got colder.

The rest of the afternoon was running around and around and around the lake.  I was trying my best to keep it as close to 1 hour splits as possible.  I knew I was slowing down a little bit but not too bad.  I also knew that as the sun was setting, I was 2nd OA Female and #11 OA ~ that was some serious motivation to keep moving!

Loop #10 found me with my butt screaming at me.  It was saying, “What in the WORLD do you think you’re doing to me!?!”  I told it to shut up and keep going.

As a ran through the S/F at the end of that loop, for some reason I felt it very important that everybody knew my butt hurt.  Crossing the timing mats I yelled out, “My butt hurts!!!”

I’m sure they’ve heard worse.  The running was starting to tell on me.  HA!!!

I knew #3OA Female was closing in on me so I didn’t stop to grab my jacket.  I knew at the end of this loop, loop #11, I could have my pacers and only have 2 loops left.  What was the most wonderful thought in the world!

I zoomed out of the S/F area and all of a sudden I couldn’t see the trail markings to save my life.  I knew where I needed to go and kind of toddled around trying to get my bearings.

I’m telling you, I could NOT find the gravel or the small embankments!!!

I stood in the middle of that campground yelling, “I can’t find where I’m supposed to go!!!”

Some kind soul came out with his car.  He turned on his brights and together we struggled to find the crossing.  He found it before I did and had to walk me down and back up to the stuffed bear because for the life of me, I couldn’t see it.   *Whoever you were~thank you!!!*

As soon as I entered the woods, I tripped and fell.  My glasses flew off and in the dark I couldn’t find them.  I told myself, “It’s only 4 miles, Howard~you can do 4 little miles without the glasses.  You can pick up your extra pair when you get back.”

I decided to keep moving.

Loop #11 didn’t go all that great.  I repeatedly got lost.  At the end of that loop, *Gospel according to Garmin* showed I wandered an extra 3 miles in the woods trying to find my way back to the S/F.

At the beginning of the loop I promised myself my jacket when I got back.

Because I wasn’t moving as fast as the other loops due to trying to find the goofy trail, the cold was settling in my bones.

About half way through the loop, I was concerned I wouldn’t have enough body heat to warm up the jacket.  I promised myself 5 minutes in the shelter with the jacket~then I would head back out for loop #12.

With about a third of the loop left, my back was aching and I knew I was starting to run with a tilt.  I just couldn’t straighten myself up!  Even with all the planks I do, it wasn’t enough.

Shortly after that, I was getting legitimately concerned about making it back without people coming to find me.  I was very seriously cold and knew I was in trouble.  I’ve never been in this situation before and I didn’t like it.

Not long after losing the glasses I lost my vision.  It didn’t stick around long at all.  The cold and wind combined, my poor eyes didn’t stand a chance.   What I did eventually see, though, was the glow of lights coming from the S/F.  What a beautiful glow!!!  I aimed my body in that direction.

I knew I was getting close when I heard people cheering. What a wonderful sound!!!

This kid was literally staggering.  I must’ve been quite the sight and the mental pic makes me laugh!  This short, middle-aged housewife from Mississippi staggering up a hill, body tilting sideways, in the dark on a Florida trail.

All of a sudden I felt a man grab my arm and support my body.  Can you say, “The most wonderful feeling ever!?!”  The struggle to stay upright was over and my body gratefully accepted the help.  I turned my head to the guy (who turned out being the RD) and said, “I can’t see.”  I don’t remember a whole lot after this because I was completely fried but I do remember him saying, “That’s so badass!”

Of course you know I’ll be back next year, right?  I’ve got a score to settle on those trails and besides, what are the odds of it being Siberian weather 2 years in a row? 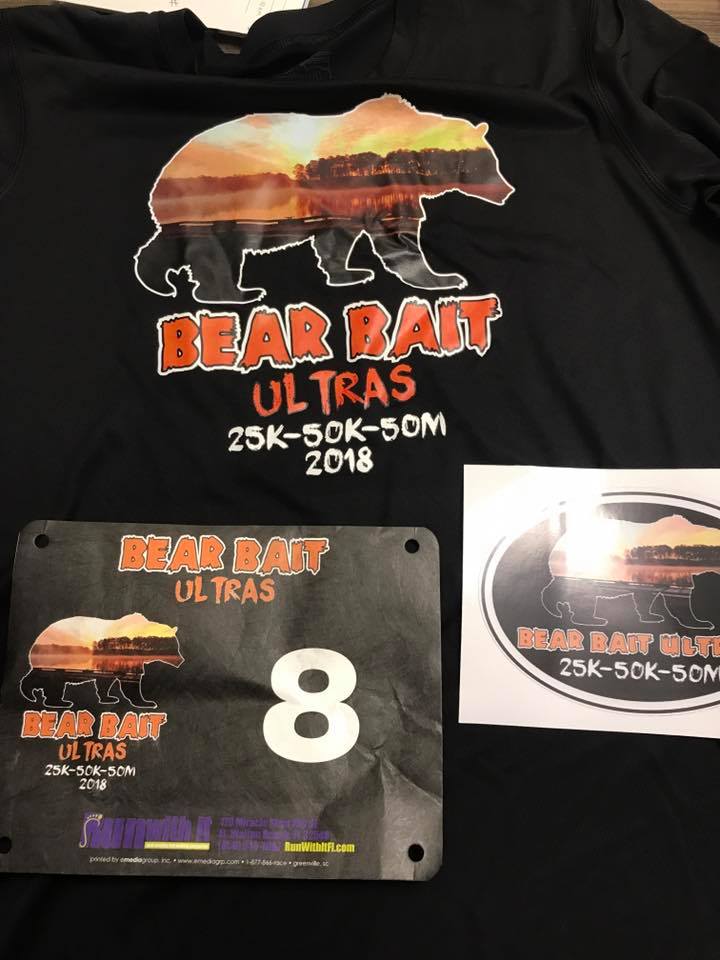 My wonderful Mississippi friends were waiting for me.  They wrapped me up in blankets and gave me some Fireball.  Awesome friends!!!  Thank you, you wonderful #MScoffeerunners!!! 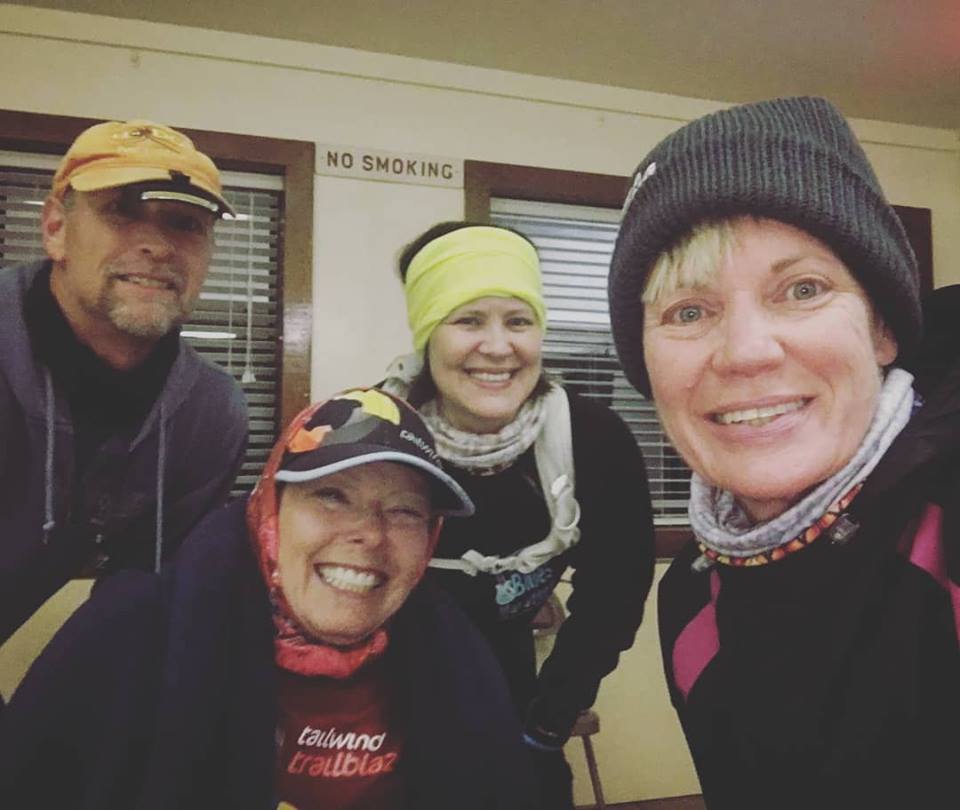 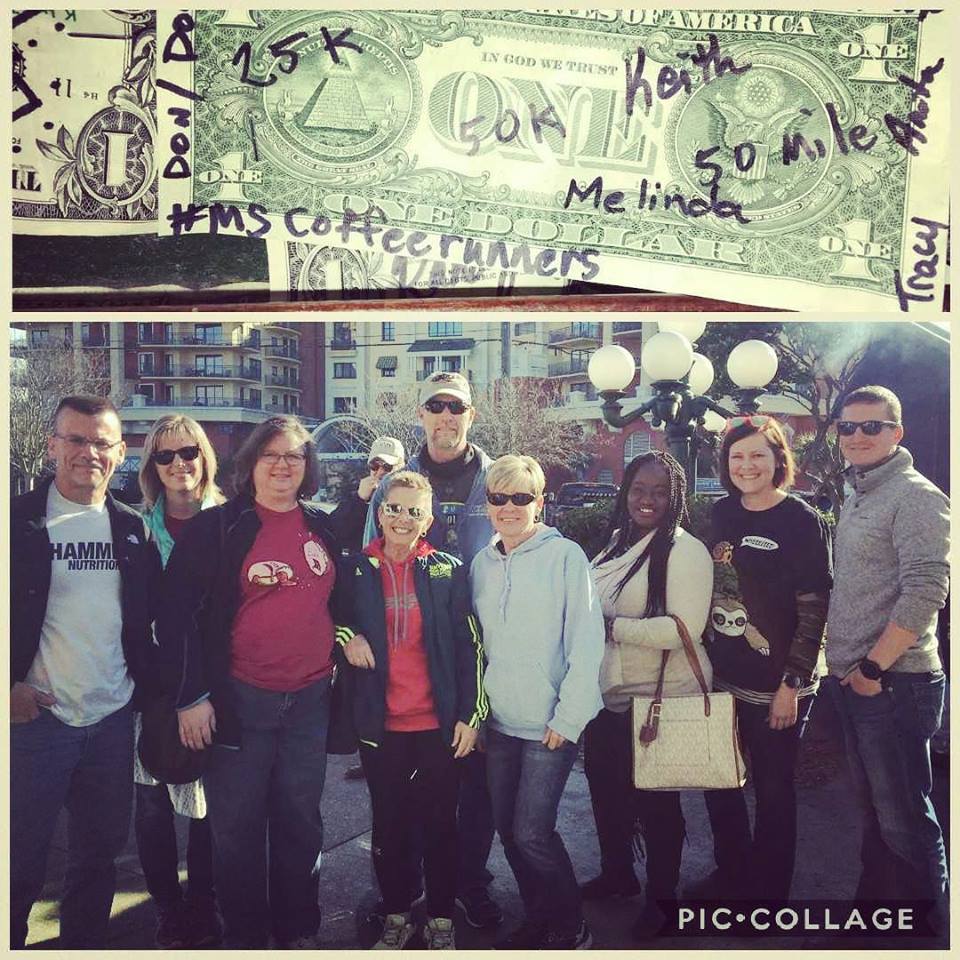 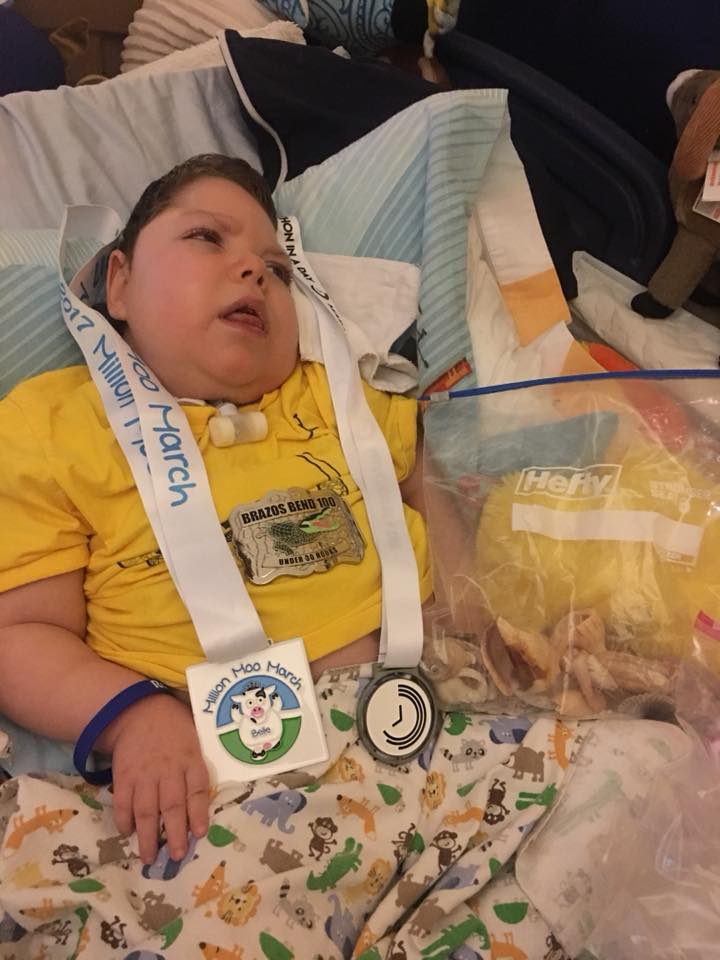