Can you believe Aiden and I *finally* ran the NYC Marathon!?!  It’s still a “Pinch me, I’m dreaming” thing!  I’m not sure if I’ll ever come down off of cloud 9 from running this race.  Before we get into the race report, I need to give a very huge Thank You to this wonderful lady.  Jenni Rom made this race possible and I owe her a great deal.  Thank you, Jenni! 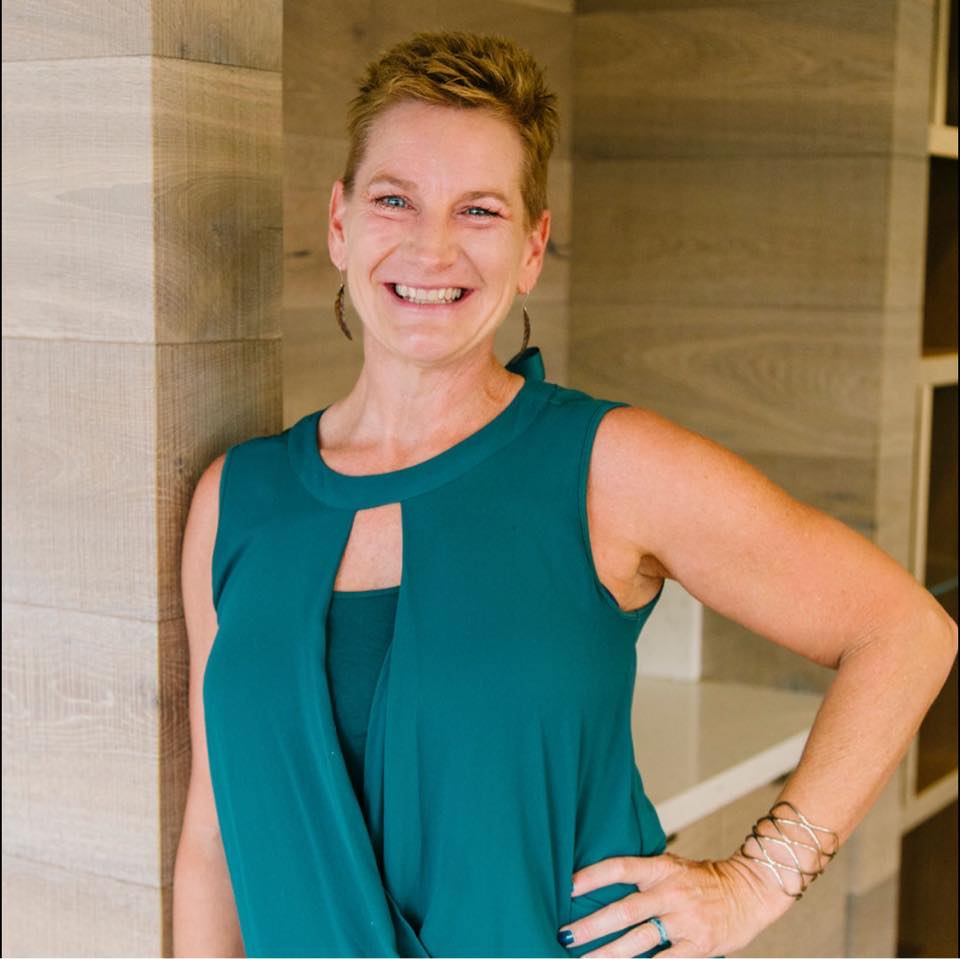 Jenni and I feed each other’s meme habit, preferably full of incredibly lame jokes.  We’re probably very bad for each other but we sure have lots of fun!

MFH (My Favorite Husband) and I drove to Chicago Wednesday evening after saying Goodbye to #1 Daughter, her MFH and our grandson.  They had stopped by for a very short visit.  We packed as much as we could into the 24 hours we had with them. Seeing as we had an early o’clock flight out of Chicago Thursday, driving over the night before was a smart call. 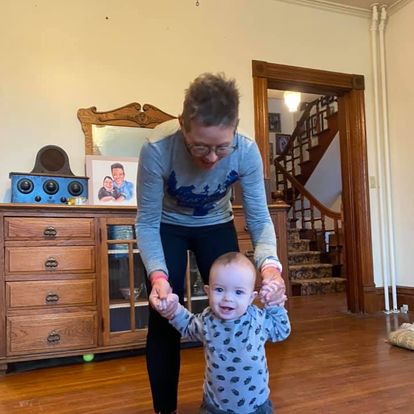 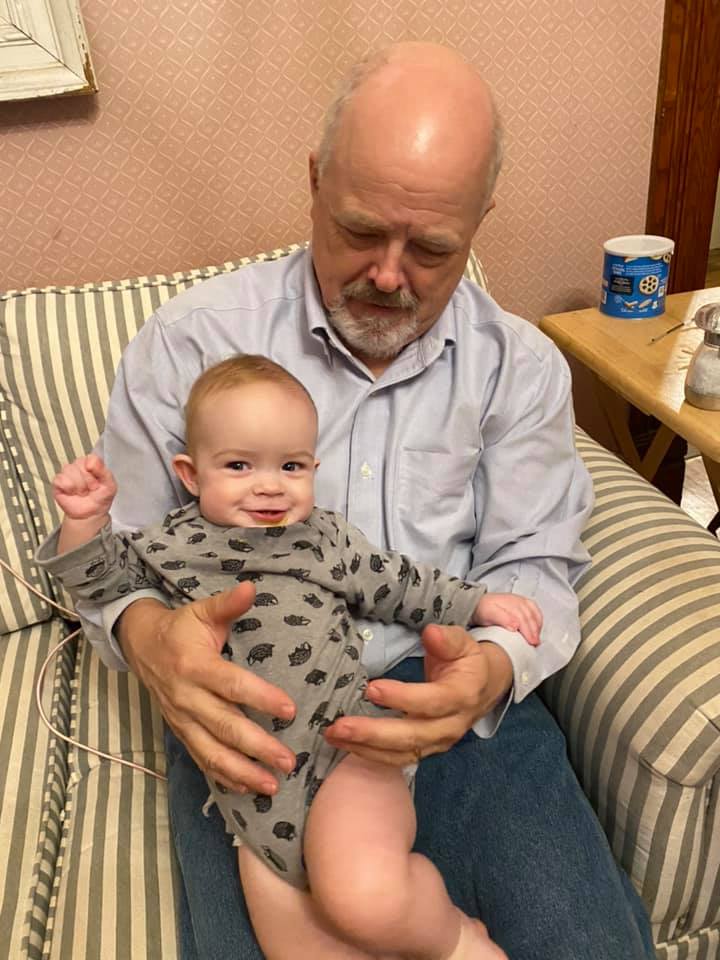 We did the TSA thing, hopped on the plane and pretty soon we had landed in NYC! 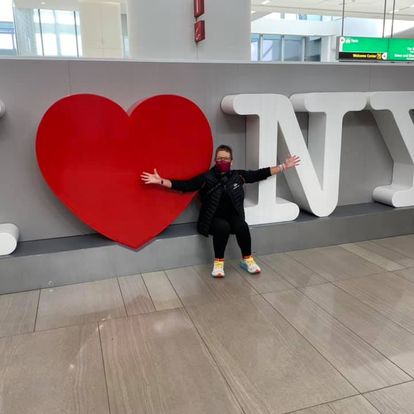 Our hotel was in Times Square.  I had reserved a taxi for us before leaving Chicago so all we had to do was connect with the taxi and he drove us to our hotel.  Easy peasy!  *kinda*

After playing a little bit of tourist around Times Square (which I dearly loved!), we grabbed something to eat and went to sleep.

Friday was packet pickup!  I love doing packet pickup, it’s one of my favorite things to do before a big race. You pick up the energy buzz pre race AND you spend lots of money at the Expo.

NYC Marathon really worked hard to make this event happen.  They tried to make it as Covid safe as they could, too.  As a runner, I had to sign up about a month before the race for the time I wanted to attend the Expo and pick up my bib.  If a runner wasn’t vaccinated, they could not attend the Expo but could pick up their bib at an adjacent tent that was outside.

Entering the Expo you were required to show photo ID and your proof of vaccination.  It really wasn’t too complicated and with Covid being it’s goofy self, I personally didn’t find their requests to be unreasonable.

On our way to the Expo, well we ended up walking 10 miles. The walking miles add up fast and you don’t realize it until they’re done!  We stopped to visit St. Patrick’s Cathedral.  Stunningly beautiful place! 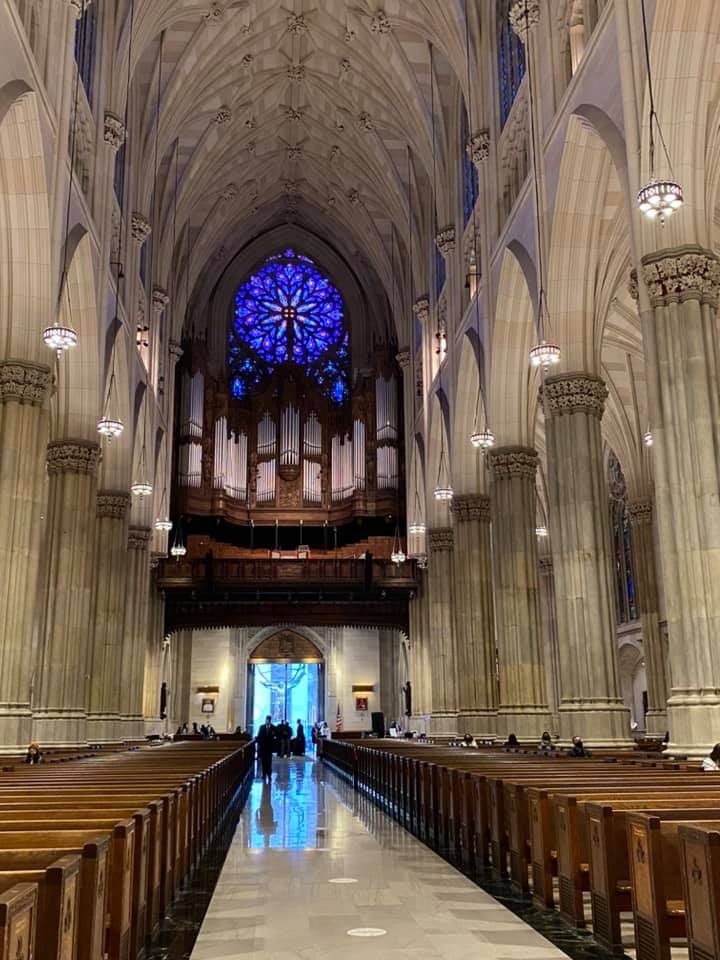 We quickly walked past Tiffany’s and Saks Fifth Avenue.  MFH breaks out in hives around expensive store. *wink*

A stop at Central Park was in order so we could check out the finish line.  Saturday morning while I was resting, MFH went out and ran 7 miles in Central Park!  He fell in love with that place. 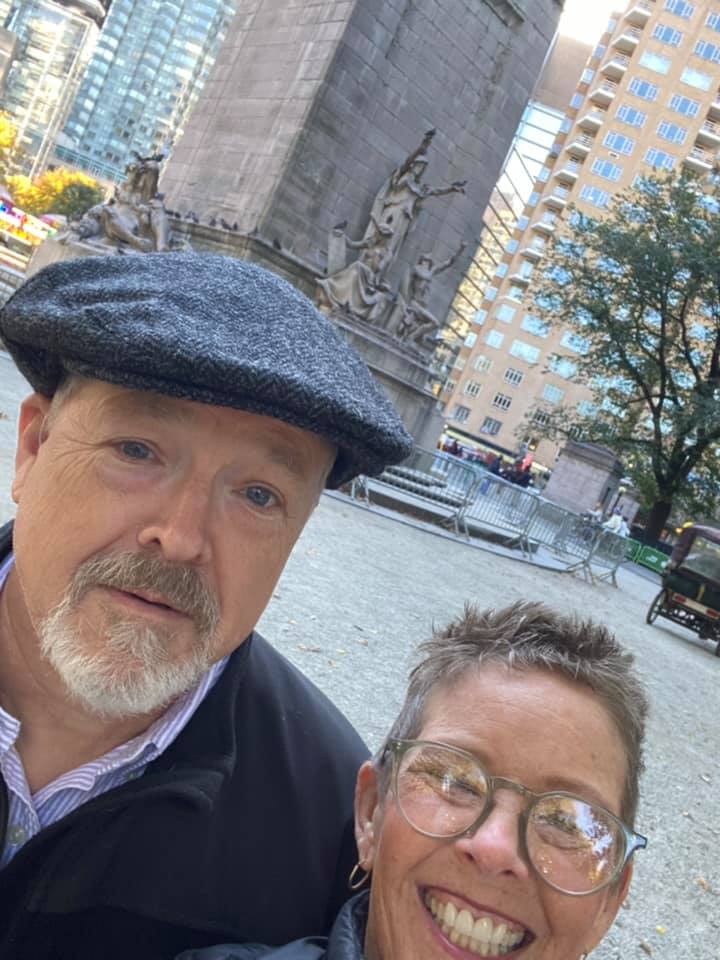 We ate soooo much food!  I learned it was pretty easy to stick to my keto-ish diet while there.  That came in handy on race day.  This fat adapted thing works!

Of course, my favorite, triple espresso in Time’s Square.  I’ve never been so spoiled in all my life! 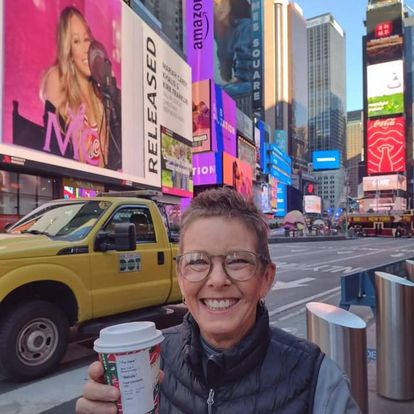 Finally it was time to head back to Central Park to meet up with a couple of Twitter running buddies!  Isn’t it awesome to meet friends IRL for the first time?  These two guys are amazing runners and it was terrific meeting them. 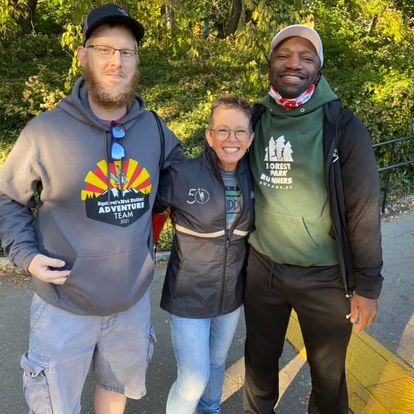 It was a huge treat and surprise to also meet and chat with a for real running legend! 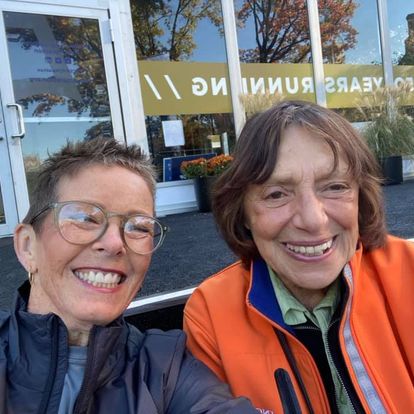 This lovely lady is the wonderful Nina Kuscsik.  Here’s a link about her and I encourage you to read it.  She’s a trailblazer for women in running and it was a honor to sit and chat with her!!!  https://www.nyrr.org/about/hall-of-fame/nina-kuscsik

Finally, it was time to head back to the hotel.  It had been a very big Friday and I needed to park my rumpatootis and rest up for Sunday.

Saturday, MFH and I only had one thing we wanted to do, that was to visit the 9/11 memorial.

See, I had been to NYC only one other time, January 1981, the day after the ticker tape parade for the release of the Iranian Hostages. This was a college field trip. I still remember the ticker tape all over the ground.

I remember meeting Pearl Bailey and going to see the Philharmonic. I remember eating dinner in the North Tower of the Twin Towers.  The restaurant was on the 107th floor and called Windows on the World.  It was the one and only time I’ve had Baked Alaska! 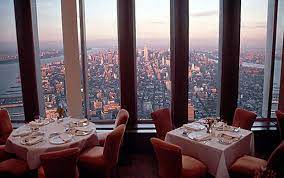 Seeing as I had all these memories, it was important to me to go back and pay my respects.  It was a powerful museum.  It was a bit of a gut punch if I’m honest!  20 years ago since 9/11.  Tragic. 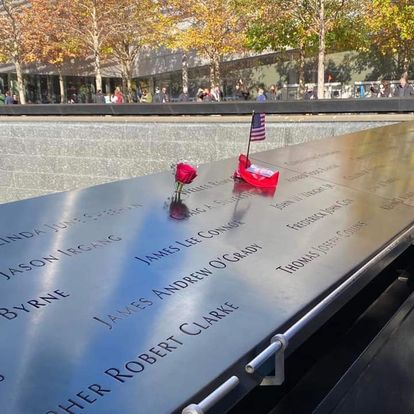 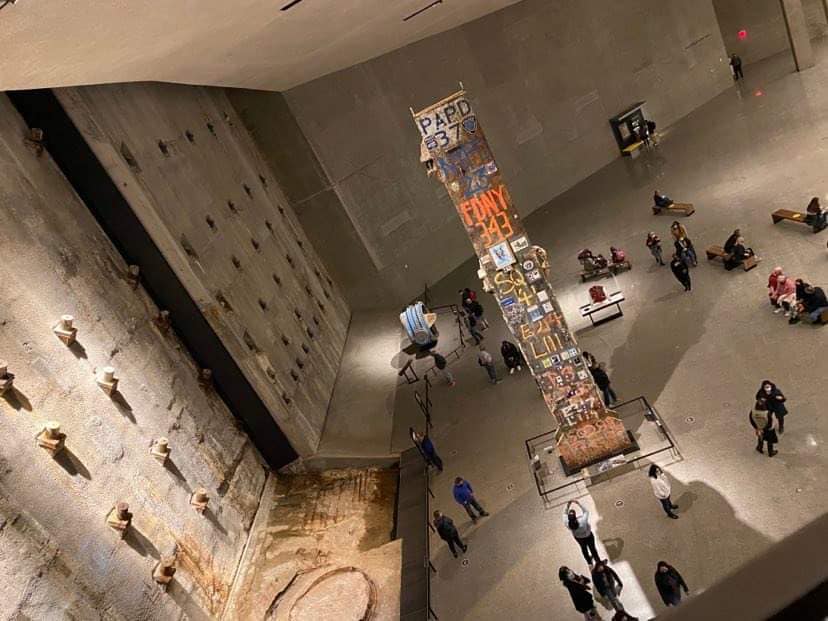 After touring the museum, we headed back to the hotel.  I took my flat Melinda pic for the race the next day and went to sleep. 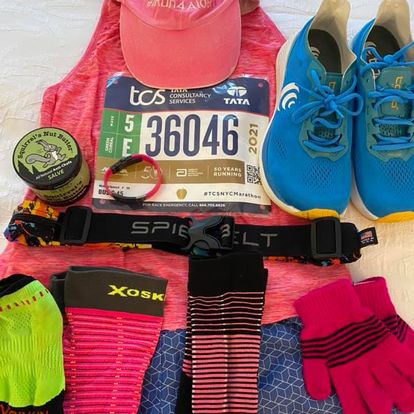 Soon MFH and I were walking through Times Square towards the library where I was supposed to hop on my bus to Staten Island and my starting village.

It was a little chilly at the beginning at the village but soon it warmed up.  My gun time wasn’t until noon-o’clock so I had lots of time to kill.  I did what I do best, talk to complete strangers!  Soon I knew well over a dozen people.  Isn’t the running community awesome that way?  I love meeting new runners!

Finally, it was my turn to head to the starting line.  YAY!!! 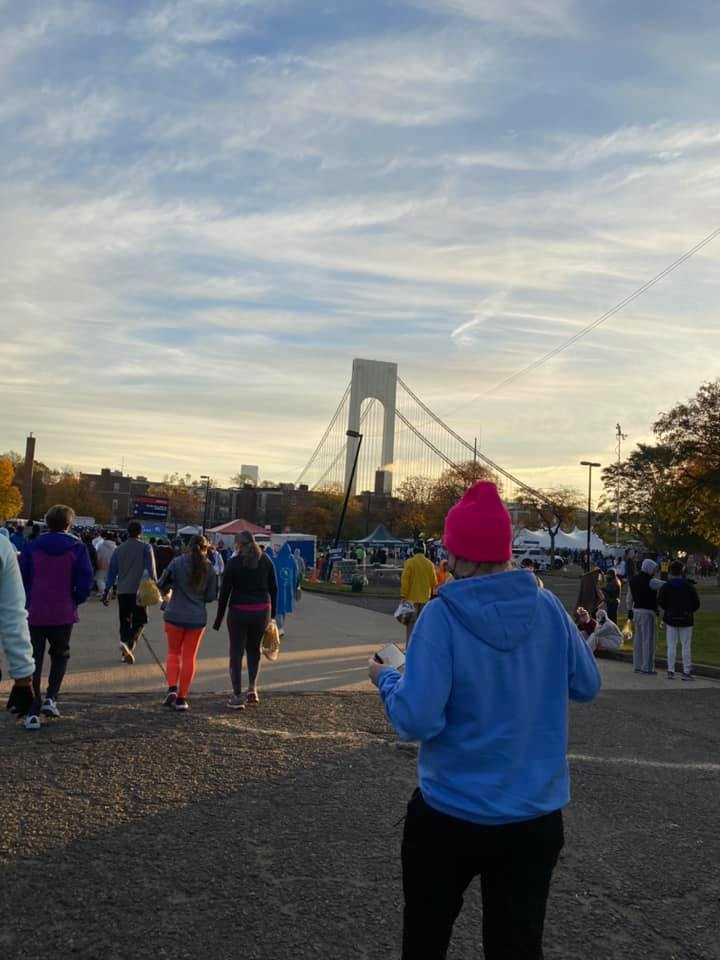 The cannon went off and so did we!

I was surprised at how easy the bridges were!  I’d heard so many horror stories about the bridges,  I was honestly a little disappointed in them.  Don’t tell anybody I said that though, okay?

I spent the majority of the race sticking pretty close to the lines painted on the road marking the tangents.  In my mind, I was pretending to be a Kenyan and running with ease…for me.  Quite frankly, I was having a blast!

Because Daylight Saving Time had just ended, that meant the sun was going to go down pretty early and boy howdy, did it! As the sun went down, the temps followed and a surprise breeze picked up.  It was getting a tad chilly.

Y’all know I’m not a fan of chilly weather so I was dreaming of a nice, warm parka about that time.

I came up on Central Park and I knew the race was almost over.  The freezing cold part of me was happy but the runner part of me was kinda sad. It was ending too soon.  It had been so much fun and I didn’t want it to be over!  That being said, running up close to Central Park there was this cute guy standing on the sidewalk, ringing a cowbell. He was cheering in the dark and being super encouraging to everyone.

That cute guy yelled out, Is that you?  I was like, It’s YOU!!!  It was MFH and I was so happy to see him.  He gave me the biggest hug I think I’ve ever had in my life and he was gloriously warm.  It was soooo wonderful to be warm for just the shortest amount of time.  He gave me a big ol’ kiss and said, You’re running rings around these people.  Go smash the rest of this race! 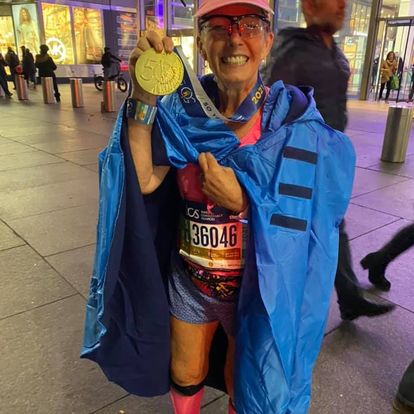 Running the NYC Marathon was a dream come true race.  Most of you know I’ve been trying since 2012 to get into this race and even today, I still can’t believe it happened!  Just, so much YAY!!!

I can’t tell you how excited I am to mail this medal off to Aiden.  Aiden buddy, we did it!!!  I’ve tried super hard to tell you all about the race and share the excitement with you buddy!  Love you tons! 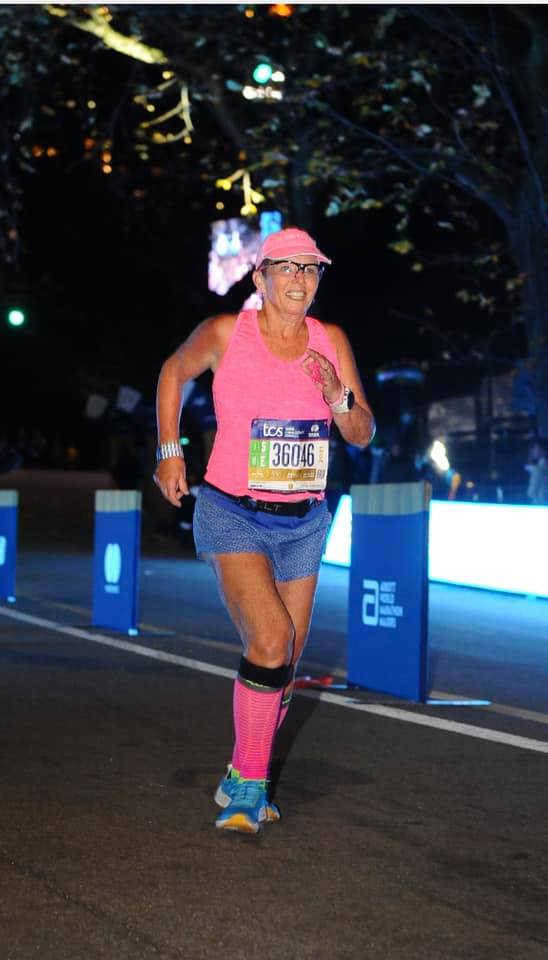 One thought on “I’m So Happy! A NYC Marathon Race Report”