Paxton is stylin’ these days.  He really thinks that he is the “Cat’s Meow!”

Back when Paxton was little, for some reason that I can’t remember anymore, I put a necktie on him.  For the life of me, I wish I could remember why I did that.  That was when we discovered that Paxton was vain.

Paxton thought that he was pretty hot stuff wearing that tie.  He would get very upset if we took if off of him for a bath or really, for any reason.  That was HIS tie and HE wanted to wear it.

We let him!  I mean, it’s not that big of deal in the grand scheme of things to squabble with your dog over a necktie.

He wore that thing 24/7.  Never took it off.  He didn’t chew on it or anything.  It was his most prized possession.

Then one day, he had to go stay at Reggie’s House.

We had a trip planned and we needed to board Paxton.  Paxton loves going to Reggies House to play but Reggie does not allow ties.

Reggie was afraid that another dog might be able to get a hold of the tie and then there could be trouble.  We didn’t know that when we dropped off Paxton.  We were so used to seeing him wearing it, we really didn’t notice it anymore.

The people at Reggie’s House took off Paxton’s tie and we never got it back.

We bought Paxton a few new ties.  He didn’t LIKE those ties.  He wanted his old tie.  These new ties were smooth and silky.  His old tie was scratchy and he liked scratchy ties better than smooth ones.

Nope.  If he couldn’t have his old tie, then he wouldn’t wear any tie at all!

He immediately chewed his new ties to bits.

Paxton was sad.  He missed his tie. Time passed and he (and we, too) forgot about how, once upon a time he wore ties.

About a month ago, MFH (My Favorite Husband) and I went to an Estate Sale.  They really didn’t have much stuff for sale but one thing caught me eye.  Neckties.

They had a bunch of old ties for a quarter a piece.

I remembered how Paxton used to wear ties and so I bought three of them.  I figured for 75 cents, he could chew them up and have a little bit of fun in the process.  MFH and I brought the ties home.

MFH took the first tie out of the bag and Paxton saw it.  He knew immediately what it was and that it was for him!  How do animals know these things!?!

MFH put the tie around his own neck so he could tie a Windsor knot.   Paxton was jumping up and down with excitement.

“Hurry Up!” Paxton was saying.

Finally, MFH finished tying the knot and Paxton sat very still while MFH slipped the tie over his puppy head.  As soon as the tie was on, Paxton flew around the house in excitement!!!

He did NOT chew off the tie!  He loved it!!!  He is still wearing it right now!  Our neighbors have all commented about how Paxton is so handsome sporting a necktie and then turn away laughing, shaking their heads in amusement.

If Paxton knew about GQ Magazine, I’m willing to bet, he would do his puppy best to call them and get on the cover of that magazine.  HA!  🙂 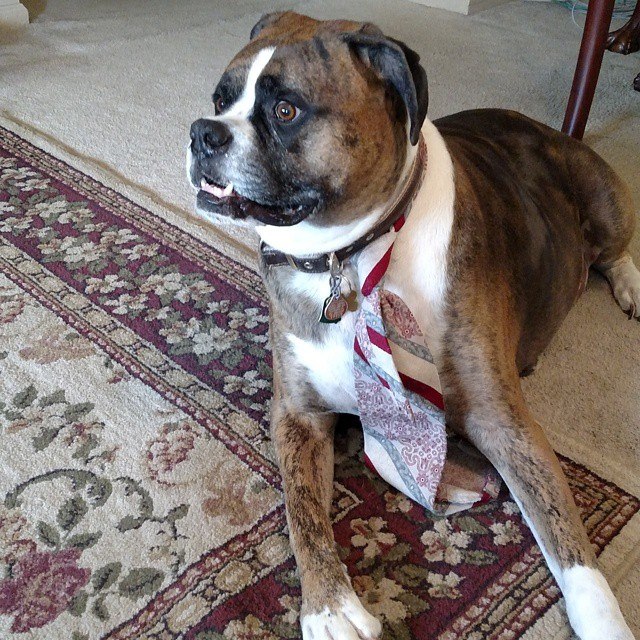