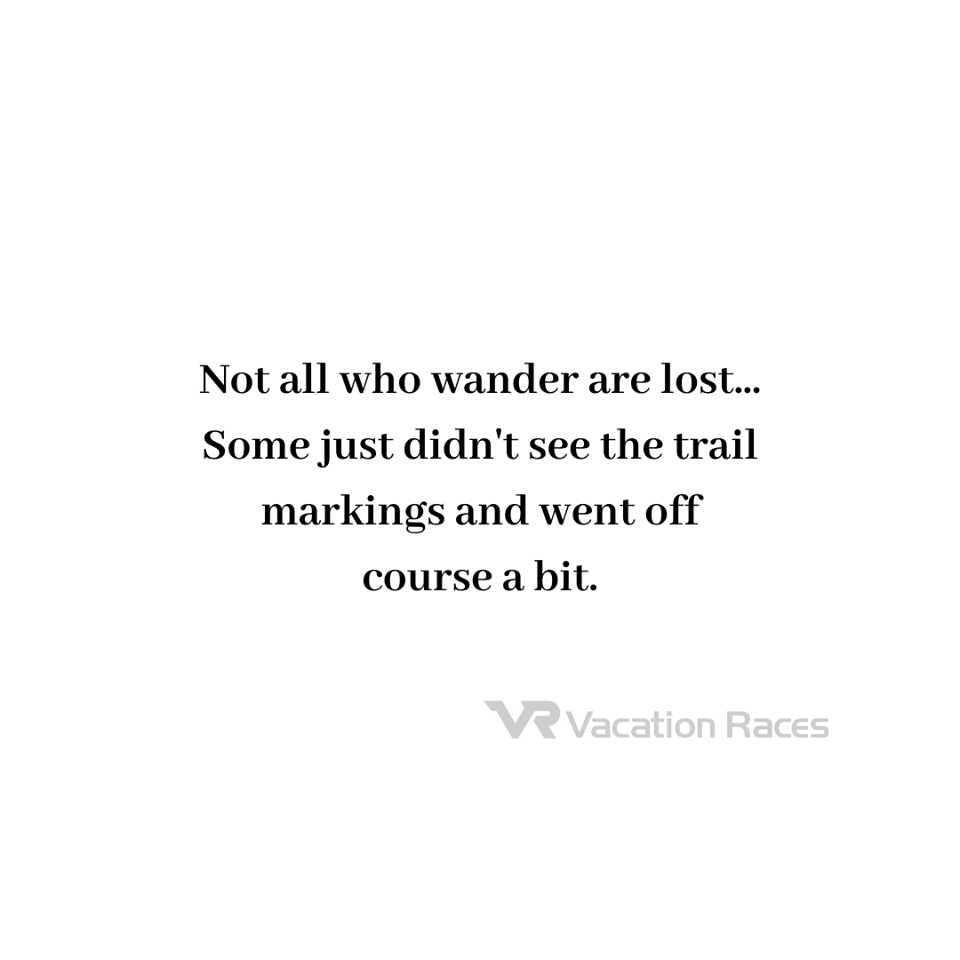 The Whiterock Ultra is held on the Whiterock Conservancy in Coon Rapids, Iowa. There’s a little bit of history to this Conservancy and didn’t realize it until MFH (My Favorite Husband) and I arrived.

We spent the Saturday night before the race at the Garst Homestead.  It’s a nice, old Iowa farmhouse dating from to the early 1900’s. 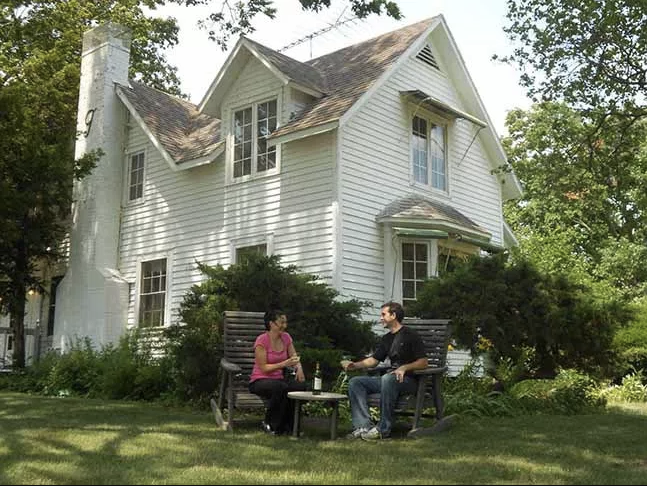 Mr. Roswell Garst was a leader in the development of hydrid corn and was responsible in the development of how farming is done today.  He encouraged farmers to develop their current farms into agribusinesses.  He also was instrumental in the use of nitrogen and other chemical fertilizers to help the fields recover faster so the farmer could get more yield per field.

The homestead where MFH and I spent the night was also the place where Nikita Khrushchev visited Mr. Garst in September 1959.  There was quite a bit Russian trinkets around the dining room, I’m guessing they were from that visit.

It was a fascinating little place to spend the night!

I loved it from the start because there were sheep up close to the house.  I tried to make friends with the sheep and quickly learned they’re not as friendly as cows. 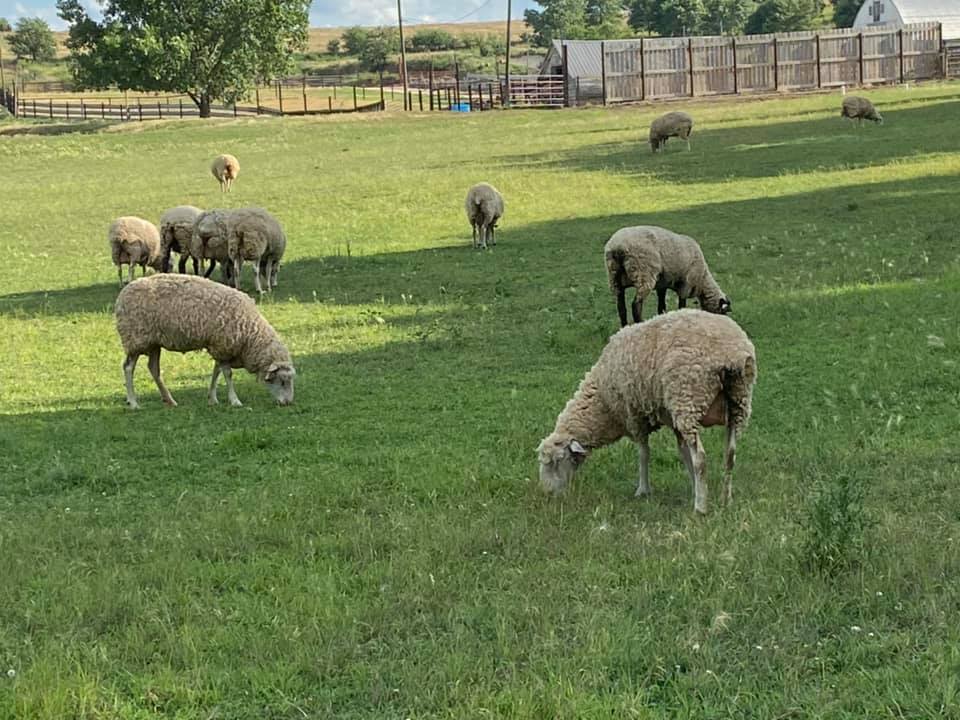 After MFH and I recovered from the fact that we were actually staying at a pretty cool place, I laid out my Flat Melinda and went to sleep. 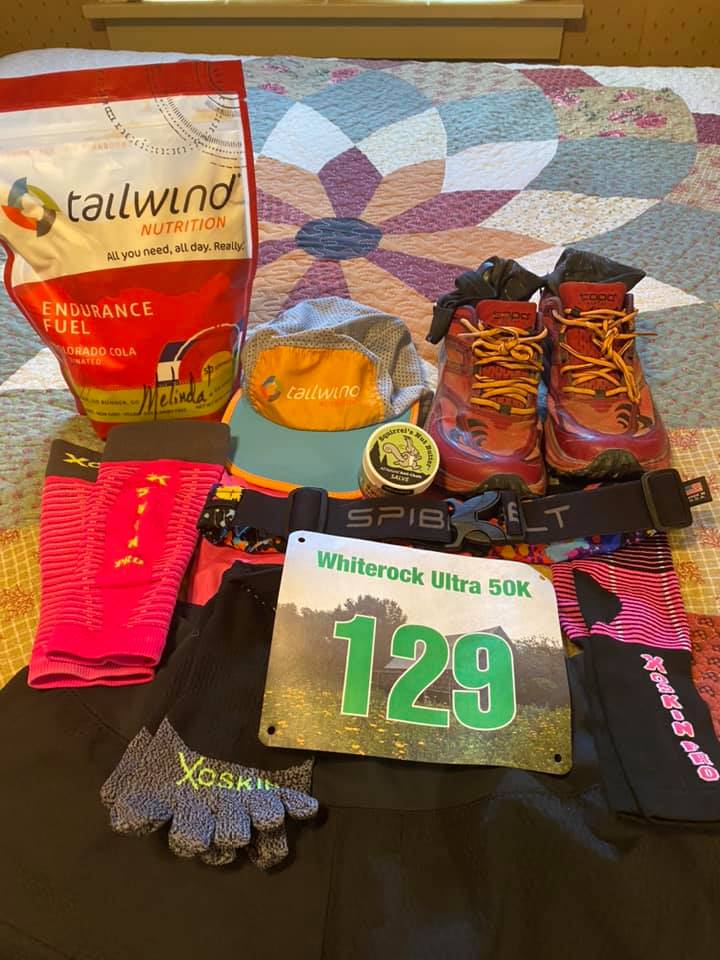 It was a treat to have a race that didn’t begin until 7:00am and I was doing the happy dance about not having to get up at dark o’clock to get ready for the race.  Still, 5:00 comes early enough and soon it was time to hit the trails.

Now, most of you know that MFH and I have been having a regular Saturday morning #DateRun on the trails at the Mines of Spain.  Those trails are so much fun and a bit of a challenge but definitely runable.  I thought they’d be great practice for this race.  I’d heard the trails at Whiterock were tough so I was nervous but tried hard to get as much trail time on my legs as possible. 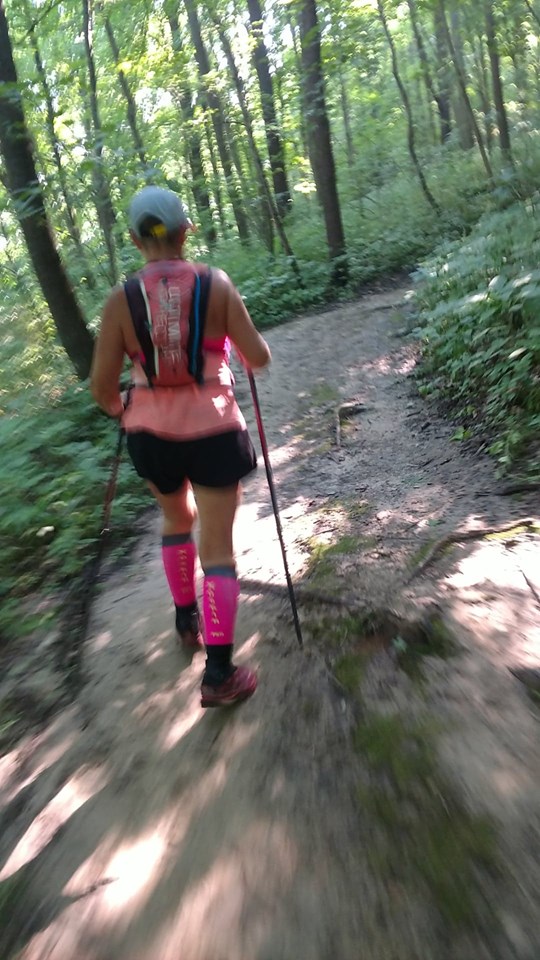 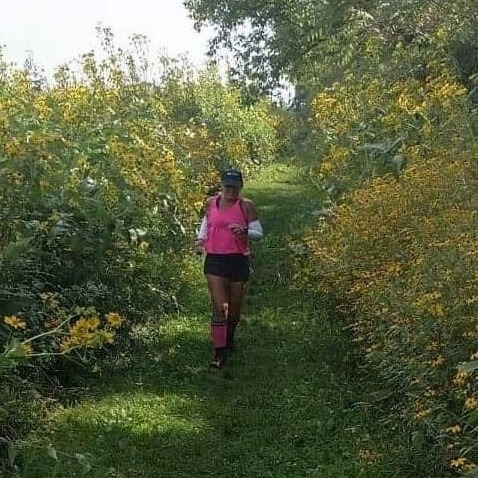 The Mines are  always beautiful AND you always leave completely spent.  It’s great!!!

Race day dawned and I was praying the hours MFH and I had spent at the Mines would help, even just a little bit!

*Parenthetical insertion here regarding the COVID-19 stuff and this  race:  This was a small race and the only time we would be around others was at the main aid station and the S/F.  The runner crews (people like MFH there to help me when I came through loops) were all VERY social distanced. The aid station people all wore masks/gloves.  Part of our race swag was a specially designed buff (which is probably the nicest buff I’ve ever owned) and we were required to wear it at the start and when we approached the S/F aid station.  There were signs up that at what point you had to pull up your buff.  There were lots of hand sanitizers…all that kind of thing.  I think they did an excellent job working with state/national regulations.  We had were staggered starts which weren’t amazingly social distanced?  We all just had our buffs up so it really wasn’t a problem.

You can see how there’s white dividing lines between the starting groups.  People in the later start groups aren’t even lined up yet. As the group in front of you began you would move up, just like in corrals in a marathon.  Finally, it was time for the 7:05’s to go! 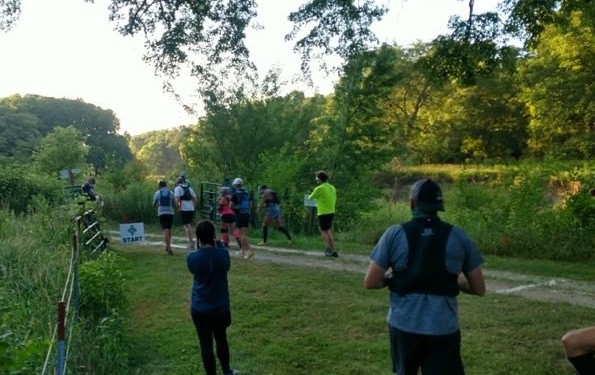 It was a cooler morning.  Low 60’s at the start with kinda high humidity but nothing like Mississippi humidity so I was a happy runner. 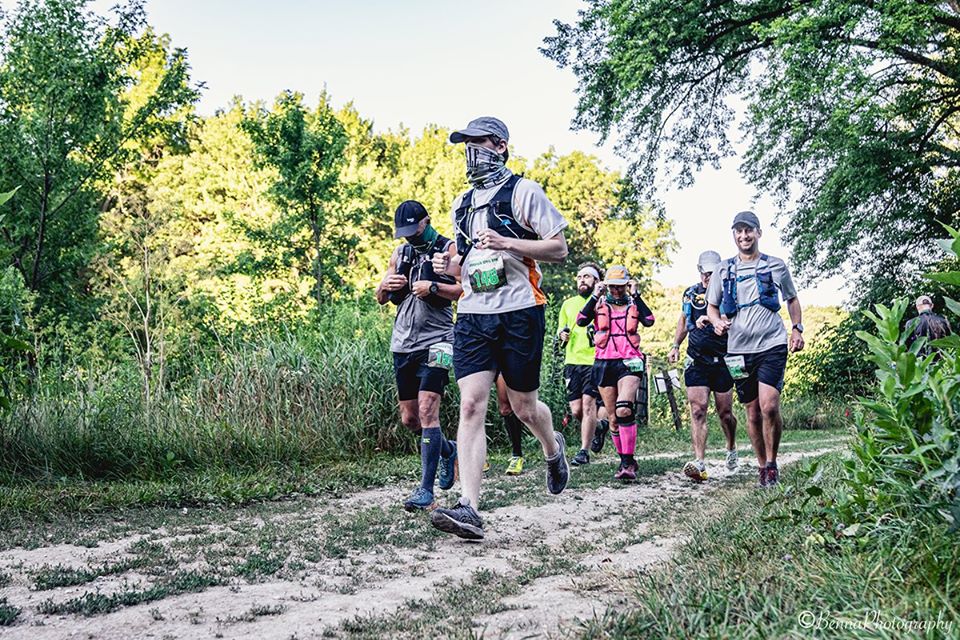 Y’all, I was soooo excited to run these trails!  They were fun and they were easy (compared to the Mines of Spain, that is).  I was having a blast!!!

There are 3 loops to the Whiterock Ultra:  The red loop, white loop and the blue loop.

That first loop, the red loop was 7.6 miles and was the strongest trail miles I’ve run in a long time.  I was thrilled!

The second loop, the white loop, is when things went a little wonky.  The second loop was a figure 8.  You ran one side, 5 miles, crossed the road and ran 6.6 miles to finish the loop.

Due to some unfortunate trail markings and me not reading them well, I ended up running the first side of the white loop twice.  My 5 miles turned into 10.  That’s not awful in the grand scheme of things except I ran out of Tailwind.

My nice cool morning was long gone and it was around 85F so running out of Tailwind was less than an ideal thing to happen?  I was not feeling spiffy.  My cap that had been dripping, was now dry.  I was not sweating and was feeling disoriented.  Still, I was thrilled to come off the first half of the white loop and see my In-Laws!!! 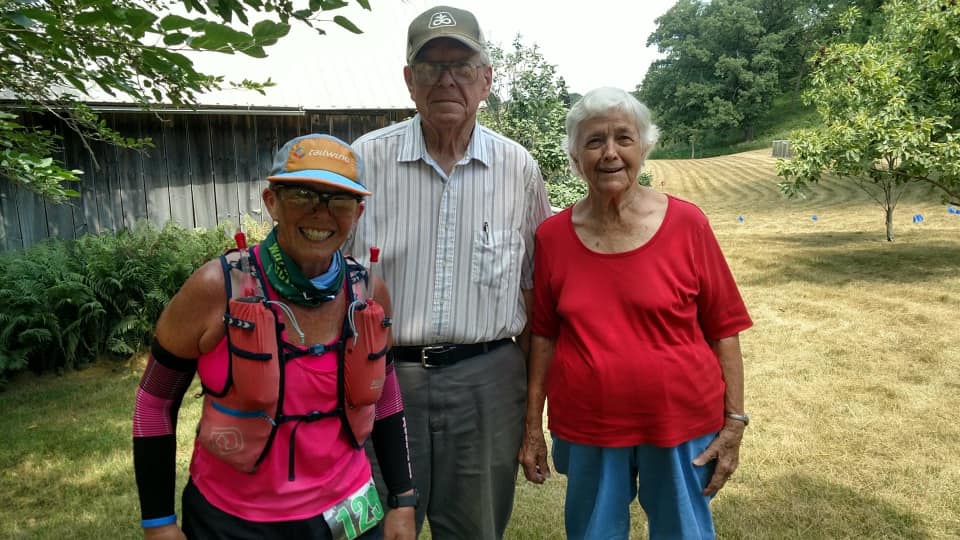 My In-Laws are the absolute best!  They had never been to any race before, road or ultra and decided they would like to see what ultra running was all about.  Y’all, they skipped Sunday morning church to come see me run!!!  It was so awesome to see them!

If you look at the elevation profile from my COROS download, you’ll see two sections that are identical?  That’s the part of where I got lost and ran the section twice. There were a few twists and turns and hills out there Sunday.  That part was a blast! 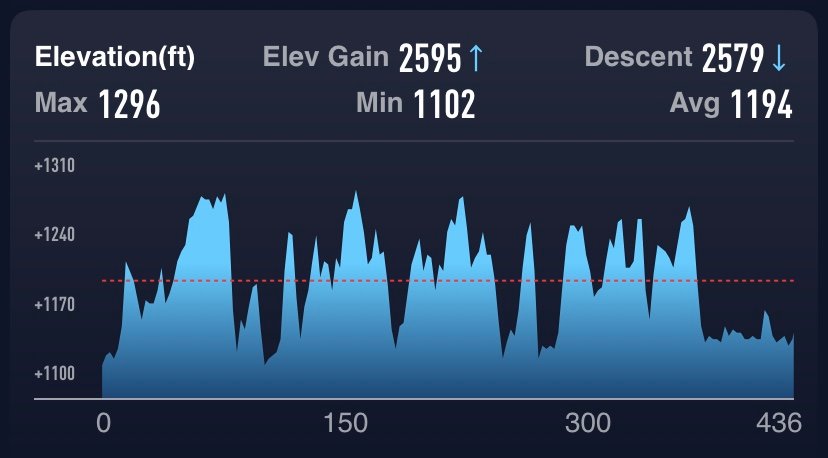 After grabbing a LOT more Tailwind, drinking an entire bottle of water and putting more ice packs in the back of my hydration vest, I went out to tackle the second half of that white loop. 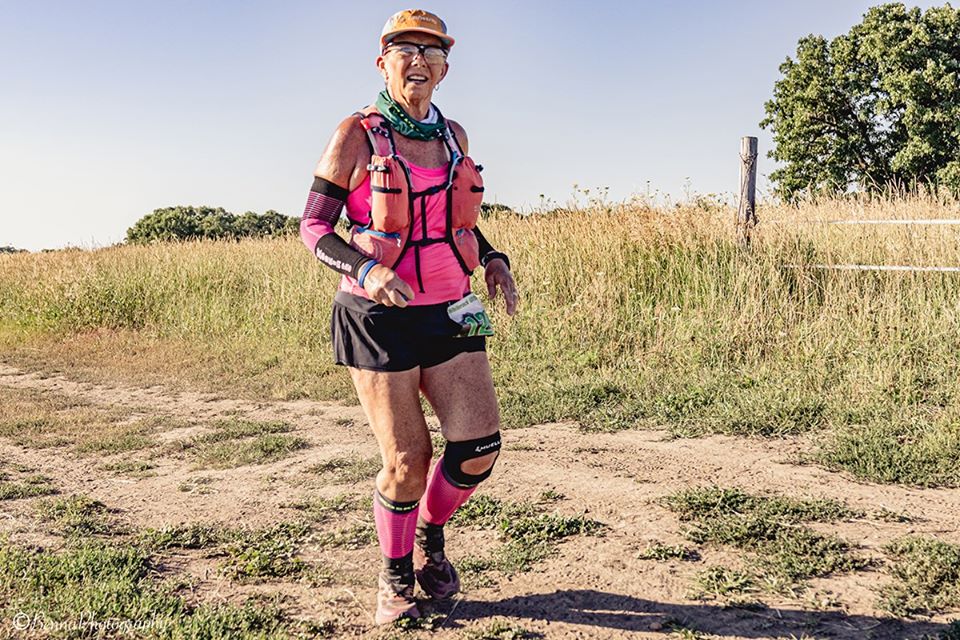 I was having a few difficulties and it showed.  Do I look a tad confused to you?  This is a hilarious pic because I was sooo toast!

FINALLY, the white loop was done and I would have done the happy dance if I had any extra energy to spare.  My In-Laws had left by this time.  They went to explore the Garst homestead because MFH had told them about it.

MFH and I chatted a bit and he knew I was in a pretty bad way.  By this point of the race I should have been at 19.20 miles, instead I was at 25.50 miles and still had the last loop to run, another 12 miles.  Due to time constraints, I would have had to negative split that entire loop.  Y’all, I can’t negative split a 5k on a good day!

I told MFH, I can do it!!! In my heart I firmly believed I could/would pull off those last 12 miles before cutoff.

Bear in mind, I’ve been ultra running since 2014 so MFH has seen me looking pretty rough more than once?  This was the very first time in all these years he’s said, No.  You’re done.

That sweet man parked my rumpatootis in a chair, stuck a beer in my hand and I flat out didn’t have anything left in me to argue with him.  I was just done. 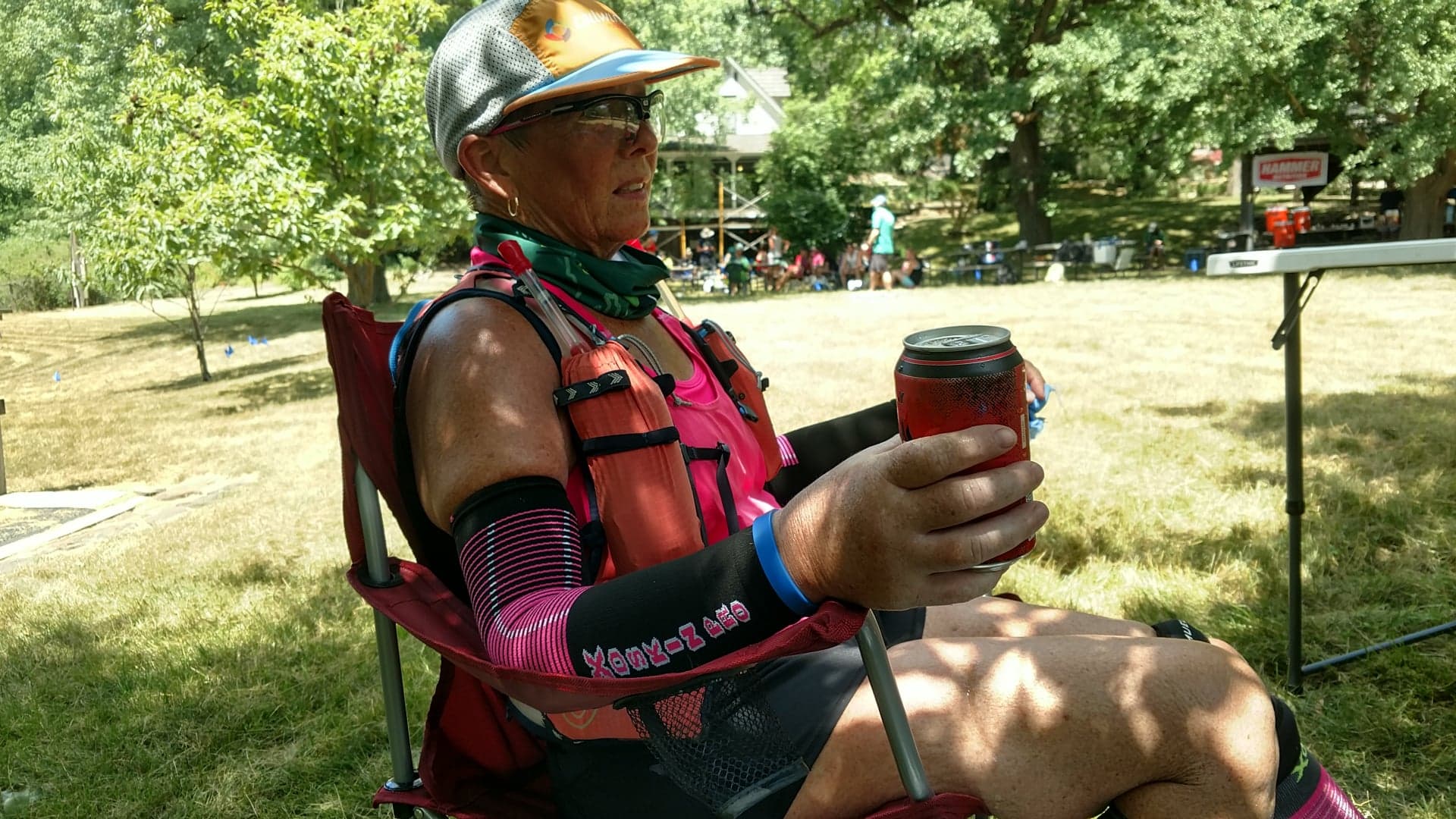 When we got home later Sunday evening, I discovered I was 6 pounds lighter than when I started running Sunday morning.  I had been pushing fluids like crazy on the 4 hour drive home.  We made so many potty stops on the drive home so I could pee…it was embarrassing how many stops we made!  I thought for sure I had caught up with all the water I’d lost.  I was very wrong.

Finally today, Tuesday evening, I’m feeling better.  I’m still down 3 pounds but not having the stomach cramps from messed up Potassium levels so I know all’s well.  I’m planning on some Wednesday miles and am excited about that!

We went out and we tried and did our best.

Am I kicking myself around the block for getting turned around on that loop?  You betcha I am!  Still, it happened and it’s a learning experience.

I’m so very thankful that I have MFH to keep me from doing stupid things…you know, like trying to get those last miles when I was running sideways and could barely stand up?  He knew I was toast and in danger and he parked me.  He’s a wise man and he loves me AND, he’s awfully cute! 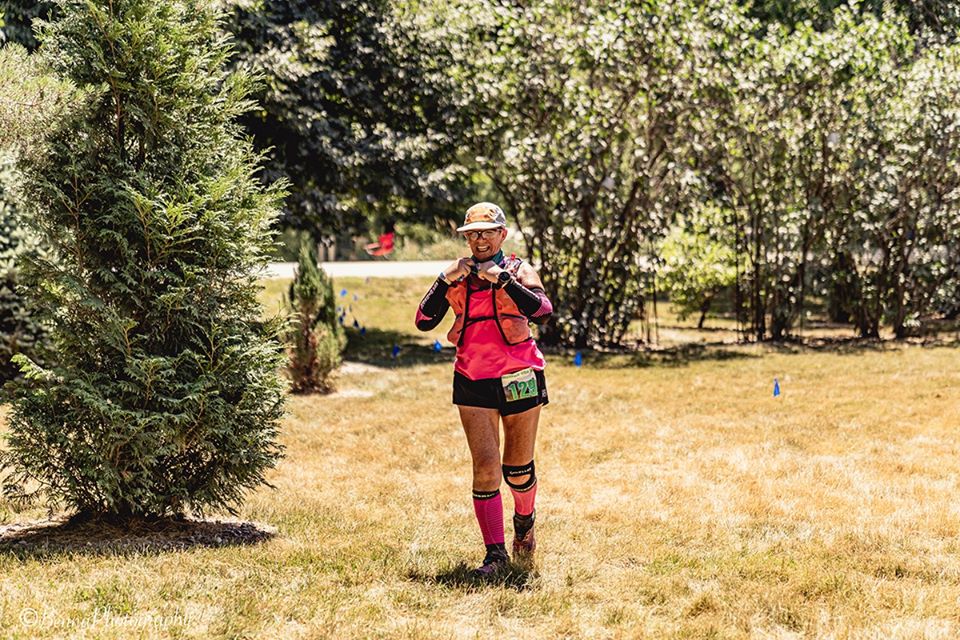 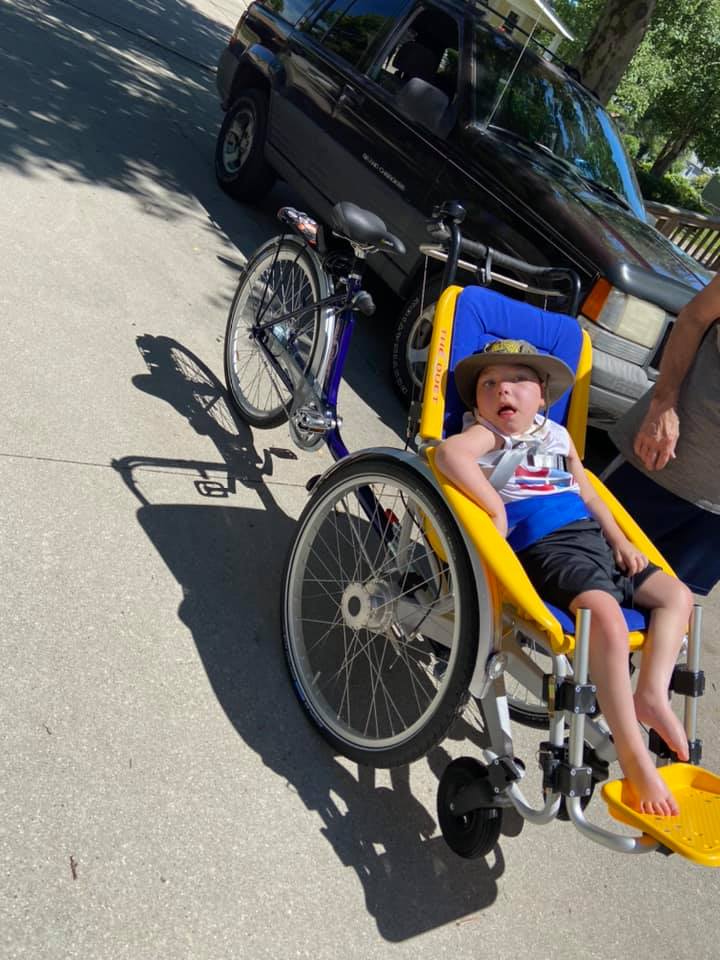 2 thoughts on “Not All That Wander Are Lost: Whiterock Ultra Race Report”