We’ll get to the avocados in a little bit so hang on to that thought, okay?

After January’s less than stellar 100k attempt, I was pretty nervous heading into this race.  I’ve shared with you in this blog some of the things that happened at that race.  I was a grumpy panda about the events of that weekend BUT it was time for a pep talk to myself, let karma take care of January, brush myself off, square my shoulders and get my head ready for a great race! 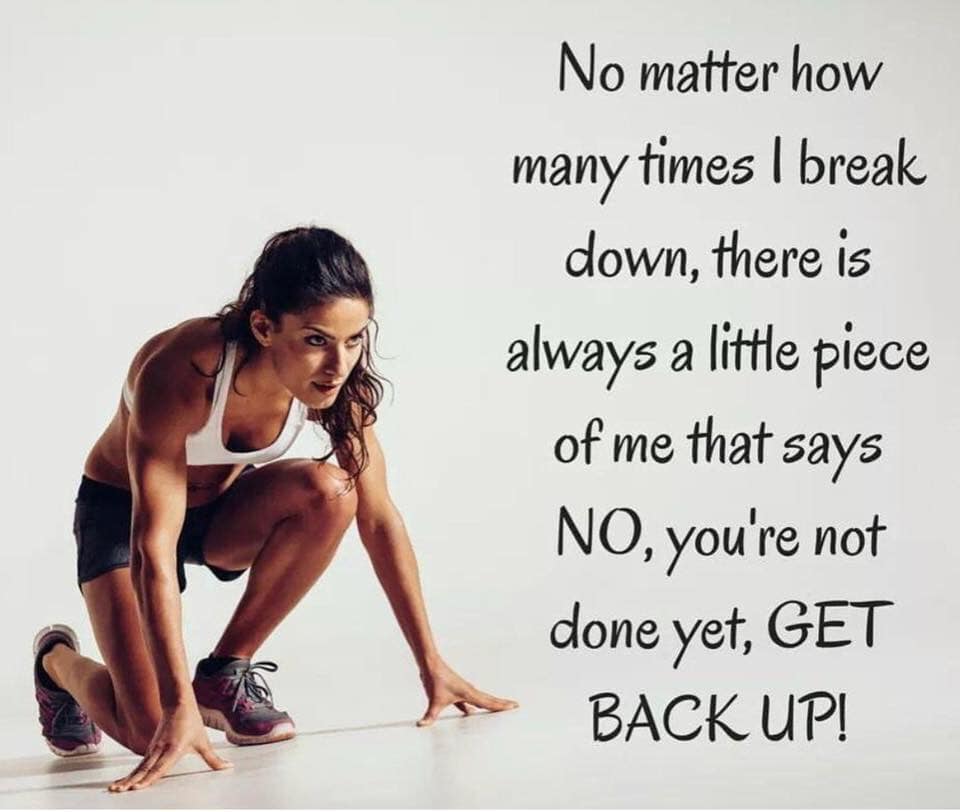 MFH (My Favorite Husband) and I had a lovely drive up to Tennessee this past Thursday.  We had decided to drive up Thursday so Friday would be a rest~ish day before the race on Saturday.  I’m glad we did that because we both slept in Friday!  I guess traveling and race nerves were taking their toll on us and we needed the extra rest. 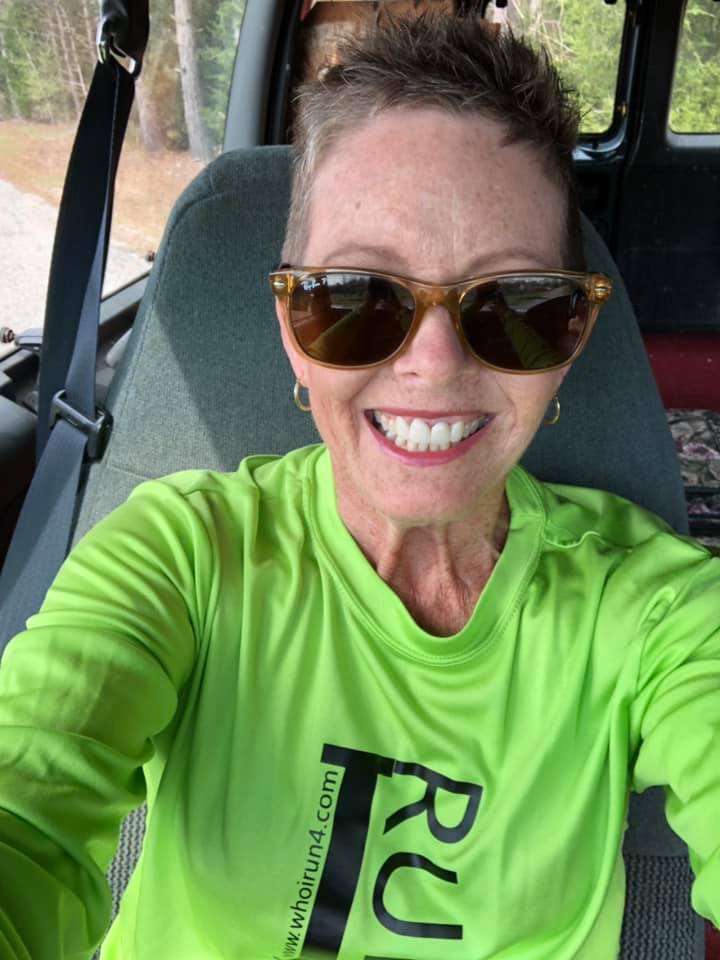 I wore my #IRun4Aiden shirt for the trip to help me focus on the reason for the race.  This race, even more than others, was specifically for Aiden.  I felt he deserved my 100% effort and that was what I was there to do.

Friday afternoon was packet pickup.  Tailwind Nutrition was one of the sponsors of this race (Pistol 100~  http://www.pistolultra.com/ ) so I was tickled to see the Tailwind banner out front of the Start/Finish. 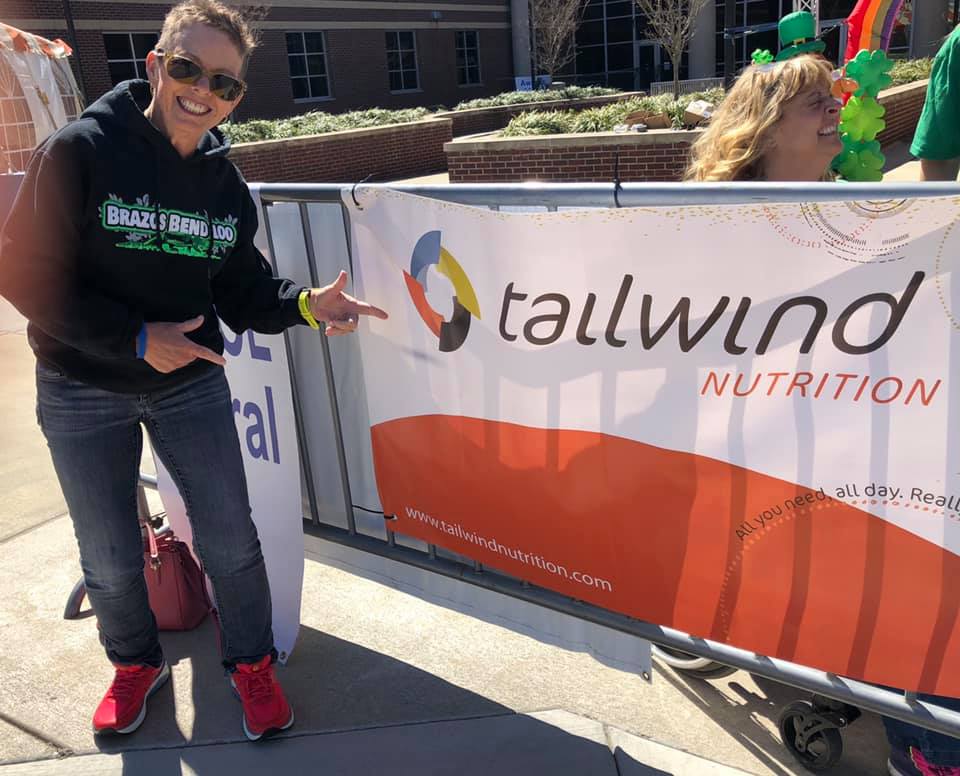 After I had picked up my race bib and swag (great swag for this race!) I was so excited to meet Catra Corbett!!!  We had met 2 years ago at Brazos Bend 100 but I knew she didn’t remember me.  She’s such a well known and amazing ultra runner and everybody’s always thrilled to meet her….anyway, I’m a very small fish and she’s big deal stuff!

Just that past week I had learned she was a new Tailwind Trailblazer with me!  Who knew!?!  It was too good an opportunity to pass  getting to chat with another Trailblazer #GoTailwind 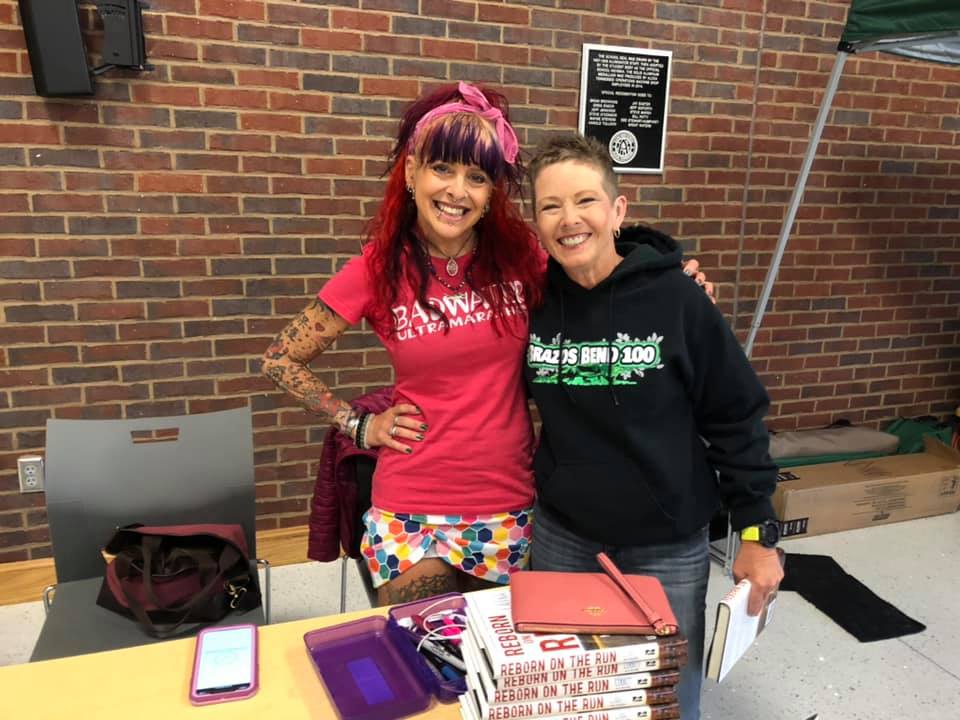 MFH and I took two of my pacers, Rob and Ken out for dinner Friday evening.  We discussed race strategy and my goals, etc.  After that, this kid went to bed.  I knew Saturday was going to be a BIG day and I needed sleep.

Of course, there was the flat Melinda pic before hitting the sack: 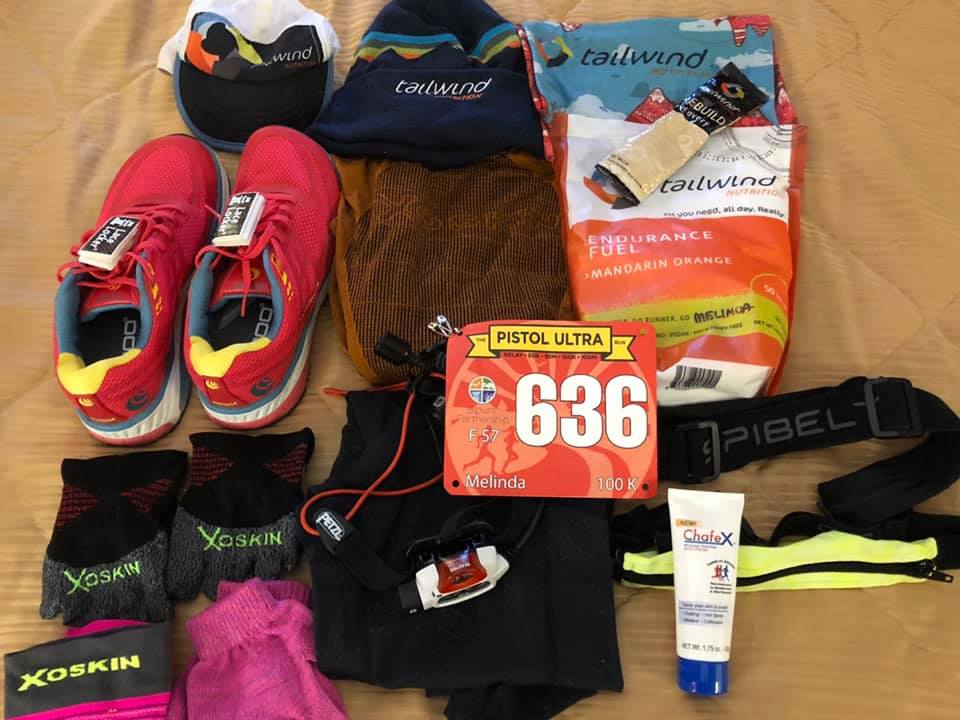 Race day was finally here and I KNEW this was going to happen.  BOOM!!!  First things first was to fuel with a solid breakfast, unfortunately our hotel had the strangest idea of breakfast ever! Blech!!!

This is where we discuss avocados!

While I was trying to find the least icky food at the hotel buffet, this man walked past me with an avocado and half a grapefruit!  I swear my jaw dropped open and hit the ground.

I stopped the man and said in disbelief, “Where did you get that!?!”

He admitted he’d brought it himself and very kindly offered to share the grapefruit with me.  I politely declined because that avocado looked amazing!!!  I swear I was drooling on it *slight exaggeration*

While we were chatting, I noticed he had a French accent so I asked if he was from Quebec.  He replied, “No.  I’m from France.”

After MFH picked my jaw up off the ground we chatted a little bit and I learned he was in the states for business and saw the race and thought he’d run the 100 Miler.

See, this was almost more than I could stand.  First he has the most amazing looking breakfast, then I learn he’s from France and then running a 100 Miler at the drop of the hat because, why not?

My brain was short circuiting.

We bumped into each other many times on the trails.  Basically, he was running 2 loops to my one.  The guy was just gliding!  On his last loop we grabbed a quick pic and I congratulated him ahead of time because I wouldn’t be back in time to see him cross the finish. 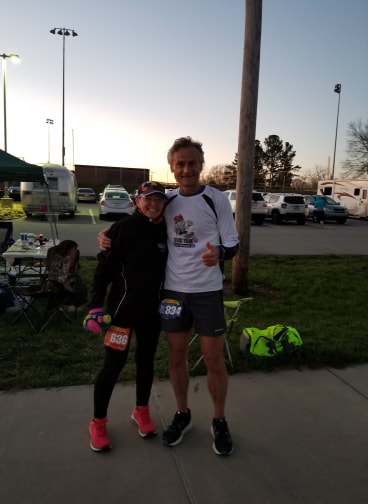 THAT’s why I’m going to start eating avocados for breakfast!!! He averaged a 9:29 pace for those 100 miles.  That’s got to be the magic recipe~avocados, and that’s why I bought some this evening at Walmart.  For real~I really did buy some!

He wouldn’t let me slack off and that first lap went easy.  He also took my pic by these two hilarious race signs! 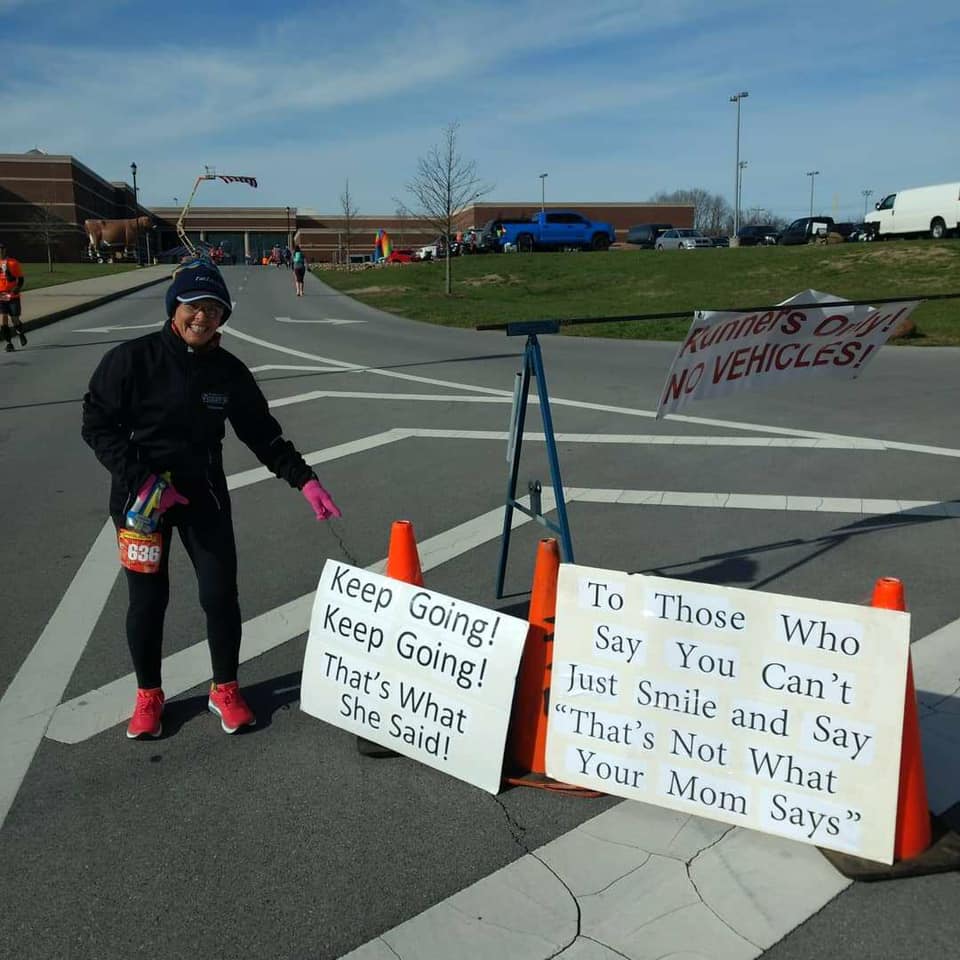 Loop 2 I was paced by a fellow Mississippi runner and friend, Ken.  Ken deserves huge kudos because he actually paced me 3 of my 6 loops!  This guy ran a 50k to help me reach my goal of this 100k!!!  He ran loops 2, 4 and my last loop, 6.  He wanted a break between the loops because he just totally crushed his own marathon a few weeks ago!  Thank you, Ken!!!

Loop 3 I was paced by Rebekah.  She’s a total beast and does 140.6 Tri’s.  She also brought me the cutest Nutty Bar towel from Chattanooga IM.  Chattanooga is sponsored by Little Debbie and the towel has Nutty Bars on it and brought back fond memories of my pudgy, necktie wearing pooch, Paxton. 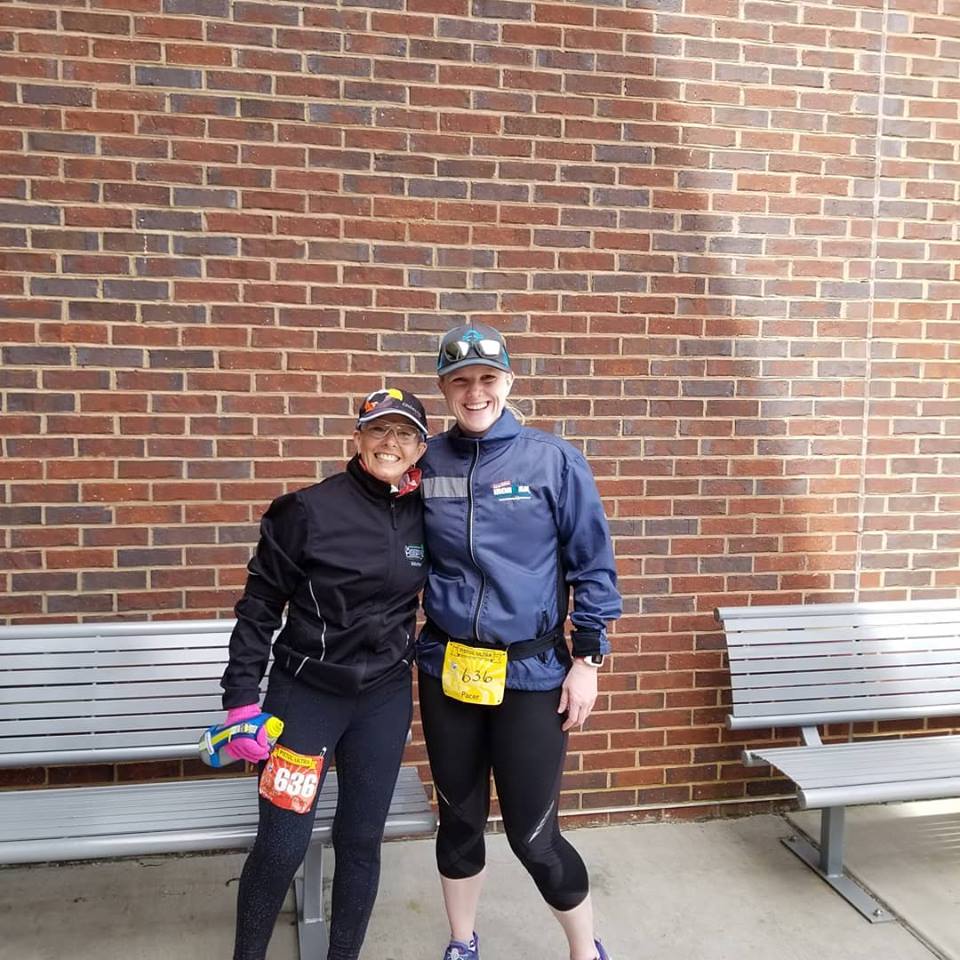 She helped me hit the 50k mark about an hour faster than my 50k a year earlier.  Thank you, Rebekah!!!  Too much fun! 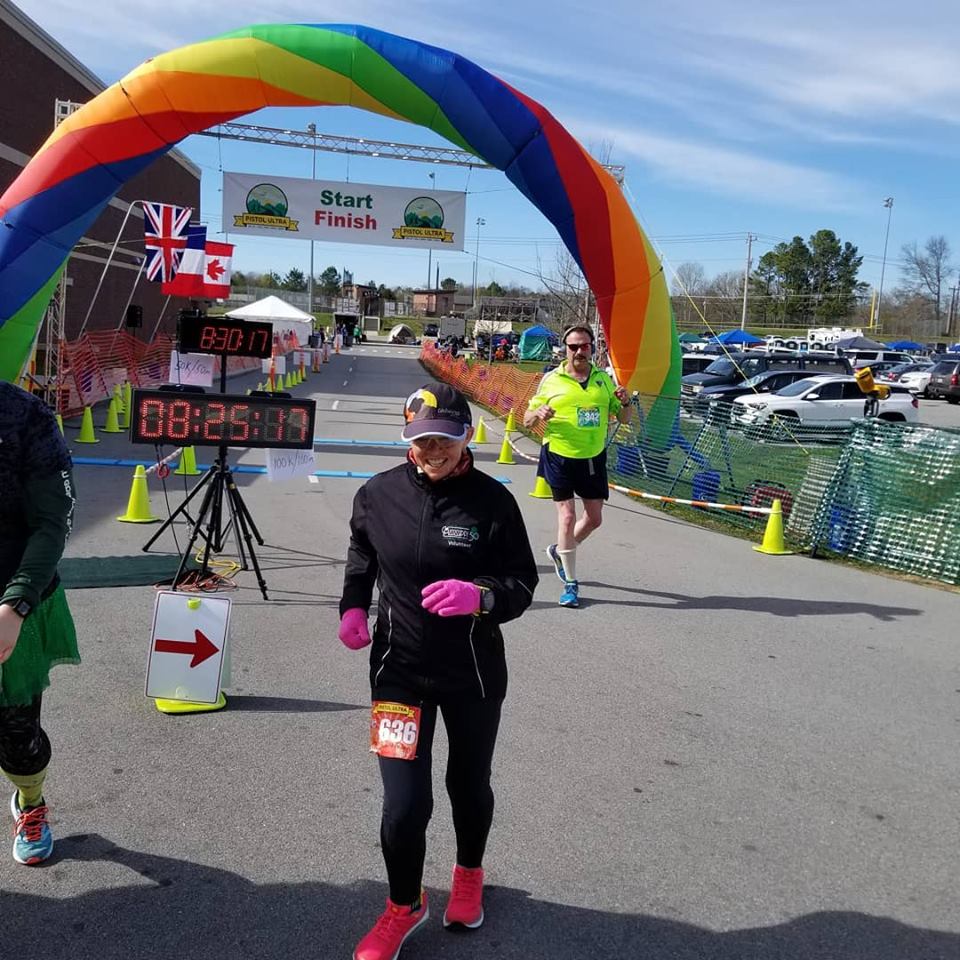 During loop 3, my only having 4 weeks of training for this race started to show.  My head was still very much in the game but my legs were starting to argue with me. I had a stern conversation with my legs at this point.  I flat out told them we were half way done.  The glass is half full!  We were getting closer to being done so keep moving!!!

Loop 4 saw Ken and I heading out again.  We had a blast chatting about just about everything and anything.  Ken is a great conversationalist! He kept my mind off the fact that my legs were getting moderately grumpy.

See, the thing is, even though my body was getting tired, my head was very much in the game and I was having a blast!!!  Is is possible to be miserable and have so much fun? 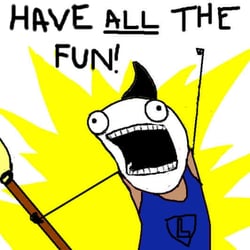 Finally it was time for the loop I was looking forward to the most!  MFH had agreed to pace me a loop!!!  He’s never done that before and I was soooo excited to run with him during one of my races! 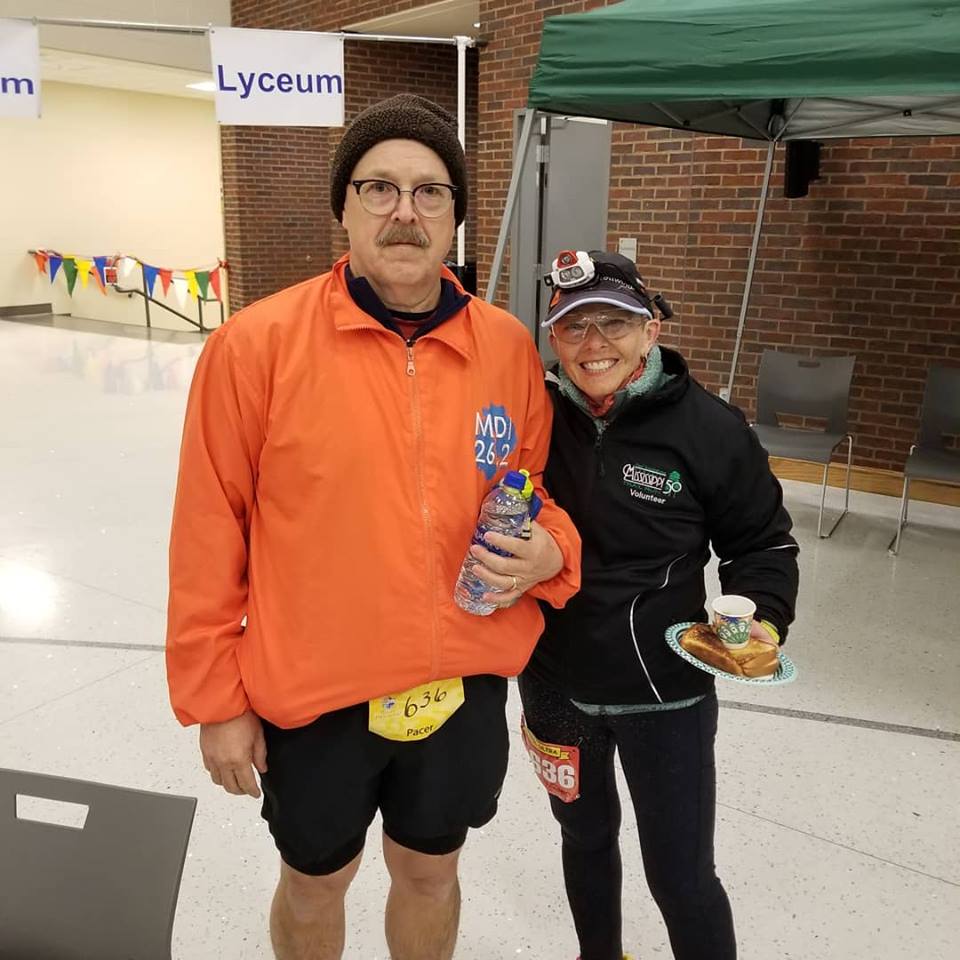 It was the middle of the night when we headed out.  I know MFH had tried to nap but hadn’t been able to sleep.  I think he was pretty nervous about this race.  He’s mentioned before that he thinks he jinxes me at ultras and I’ve told him over and over that on these longer events you just never know what’s going to happen.

We headed out for that next to last loop and I was in seventh heaven~then again, my body was getting extremely grumpy.  I guess I’m just a big sissy that way?

We wrapped up that loop and then it was time for the LAST LOOP!!!  WOO~HOO!!!

Ken and I started out on that last loop.  The temps had dropped considerably during the loop with MFH.  I had on 2 XOSKIN long sleeve shirts (which are amazing, BTW) the warmest, fuzzy North Face jacket known to mankind (a birthday present from #1 Son) and my MS50 jacket I got a few years ago for volunteering a year I was unable to run.  I was bundled up like crazy!  It, quite frankly, wasn’t enough and about half way through this last loop, I started having problems getting my body to cooperate with me.

Dear sweet Ken was an angel!  When my body said, “Nope!” he’d steer me in the right direction and keep chattering away to keep my mind off the fact that my body was rebelling.

All this time, my brain was yelling at my legs to get in the game because this was fun!!! 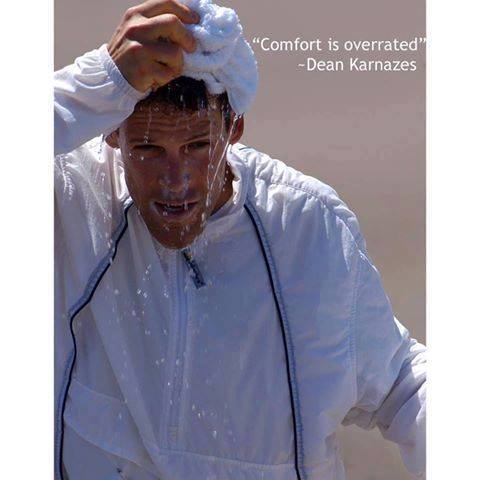 Finally, after doing that evil “lollipop” for the last time, I saw the tiny little chute for finishers.  I was soooooo excited!  I went into the chute yelling, “I’m a finisher!  I’m a finisher!!!” *I’m such a dork*

21 hours and 6 minutes after beginning this race, I finished!!! 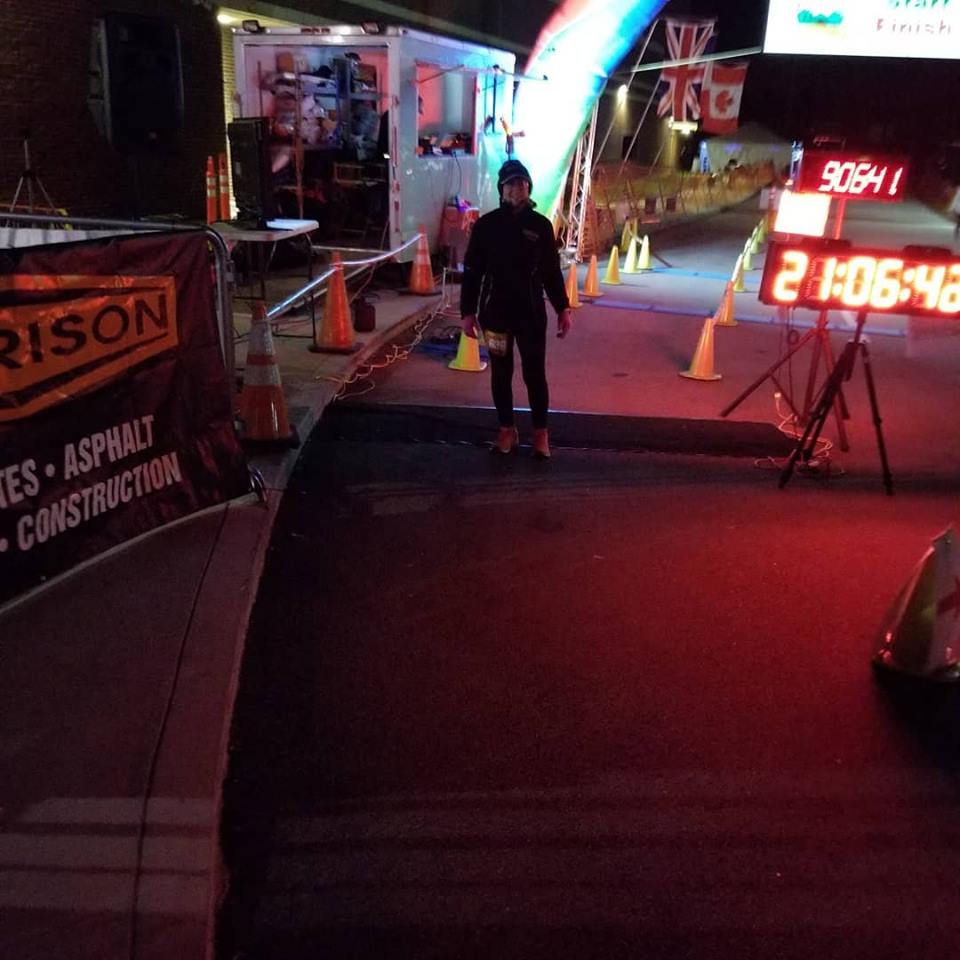 These amazing pacers, who graciously took time out of their weekend to help me complete a goal~the deserve a medal!  They listened to me babble for hours on the trails.  They learned I do NOT like Peanut Butter or bananas and quit trying to get me to eat them.  They watched me drink a whole bunch of Tailwind.  They brought me dixie cups of green olives (the most amazing trail food ever!) I simply cannot thank each of you enough!!! 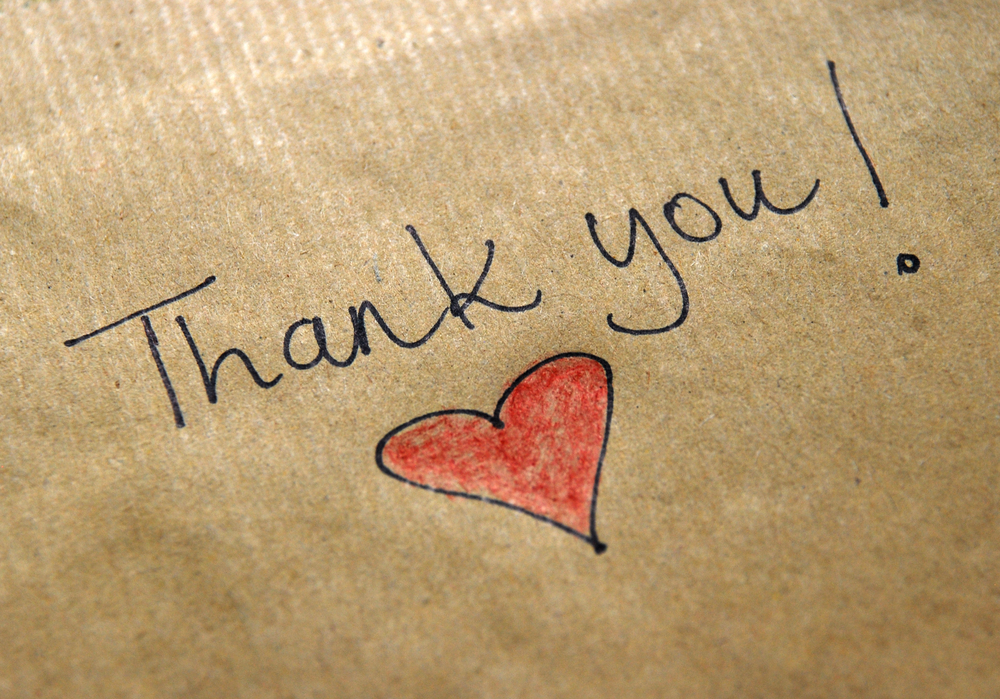 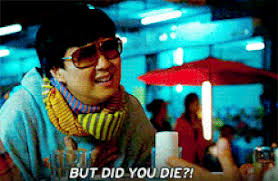 HUGE shout out to MFH who surprised me with a fancy desk that we picked up on our trip and an awesome coffee mug! 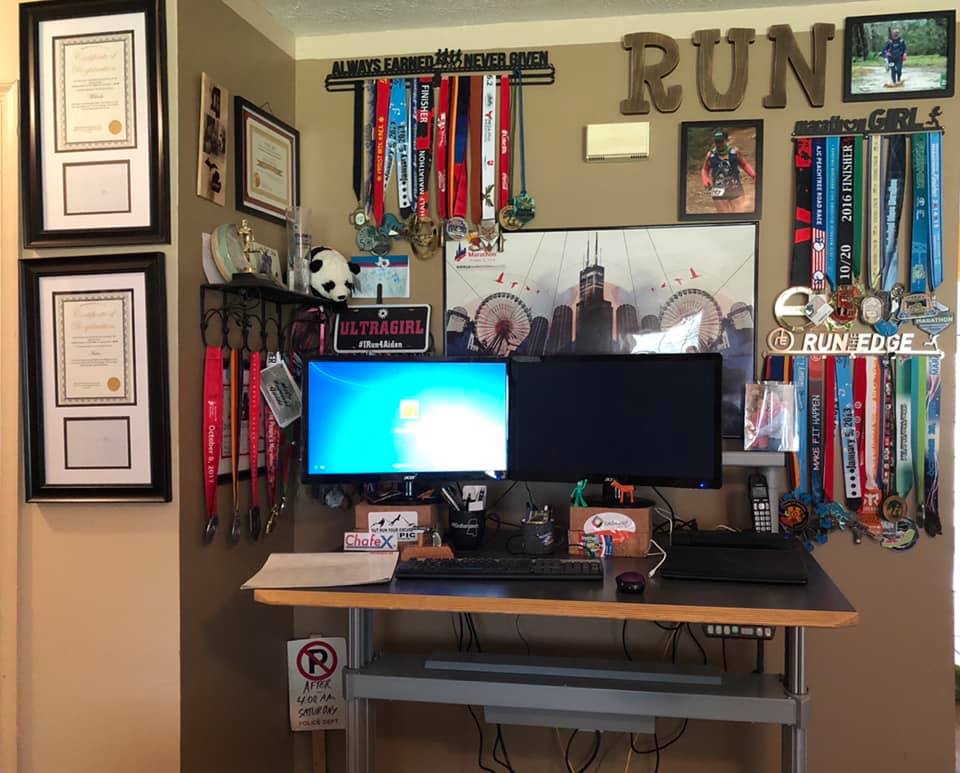 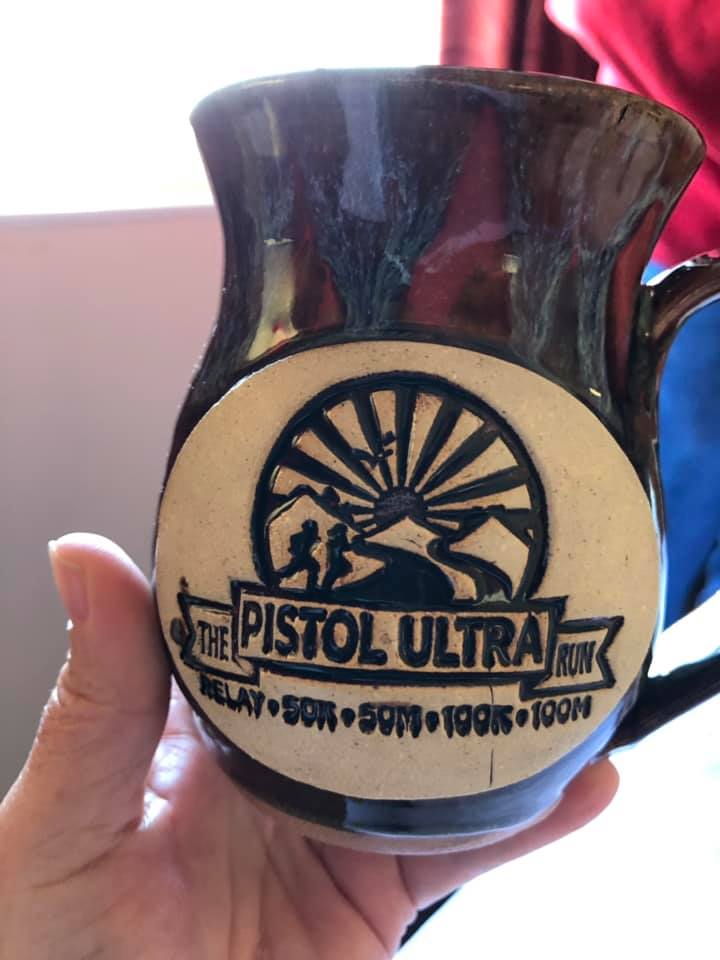 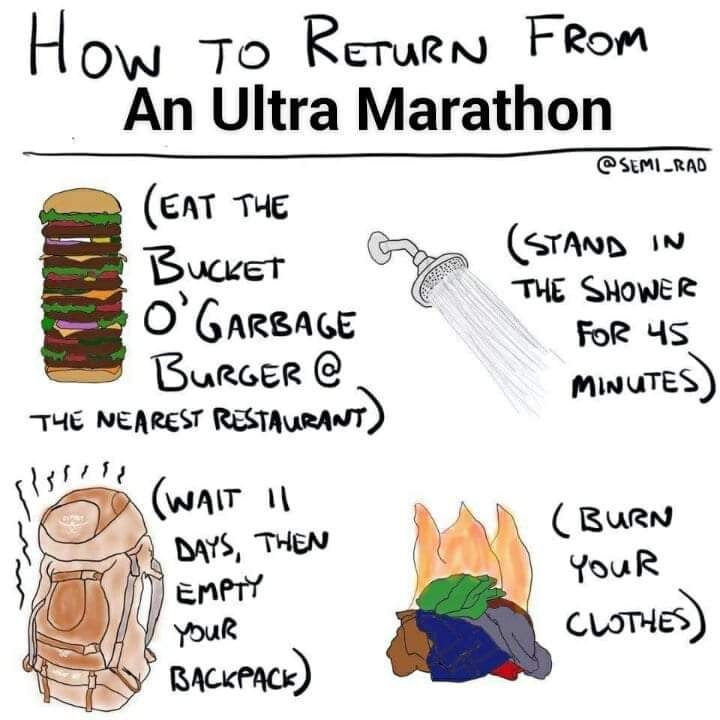 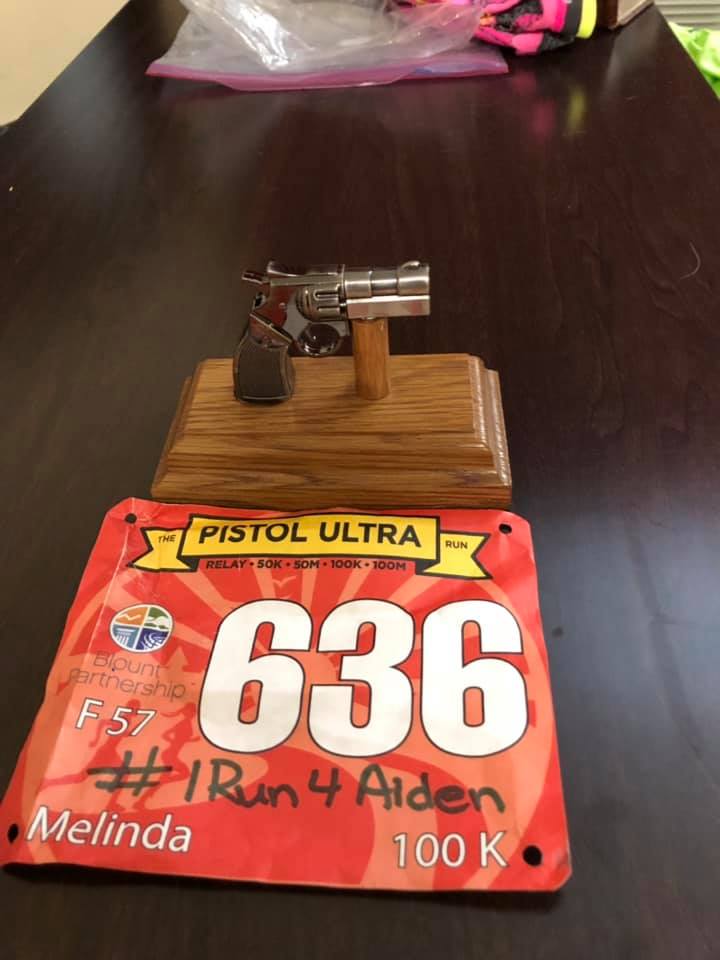 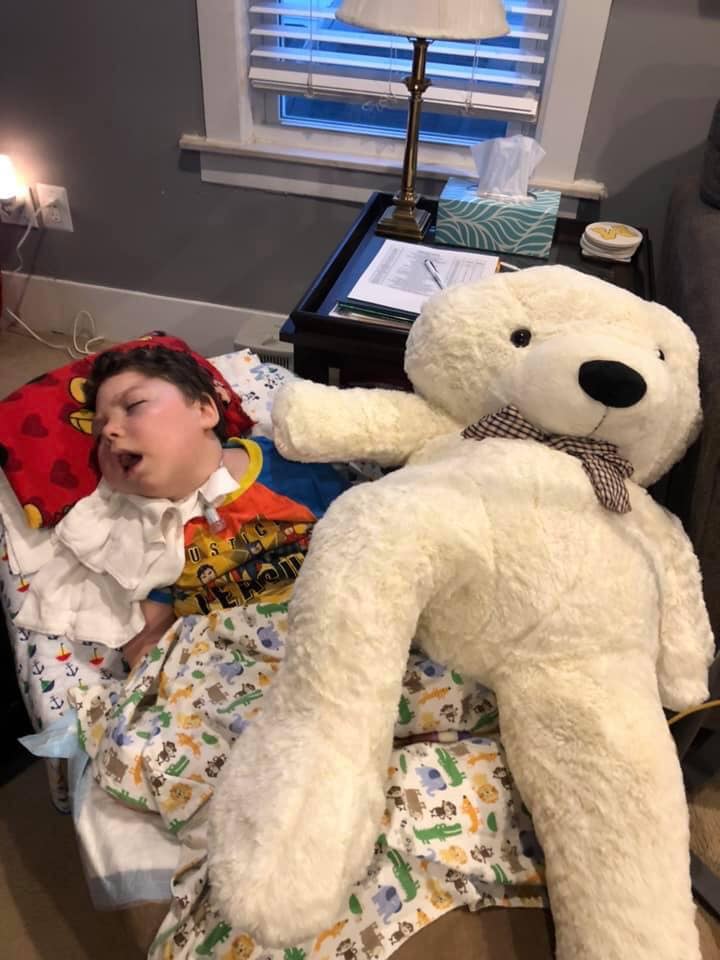 ps:  My eyes behaved at this race. I wore the protective glasses the entire time so I’m a very happy girl!  Why did they behave this time and not others?  I have no idea.  I’m just so very thankful they let me run this time.

Huge thanks to all of you for following along on my hair-brained ideas.  Your cheers, encouragement and support help so much! 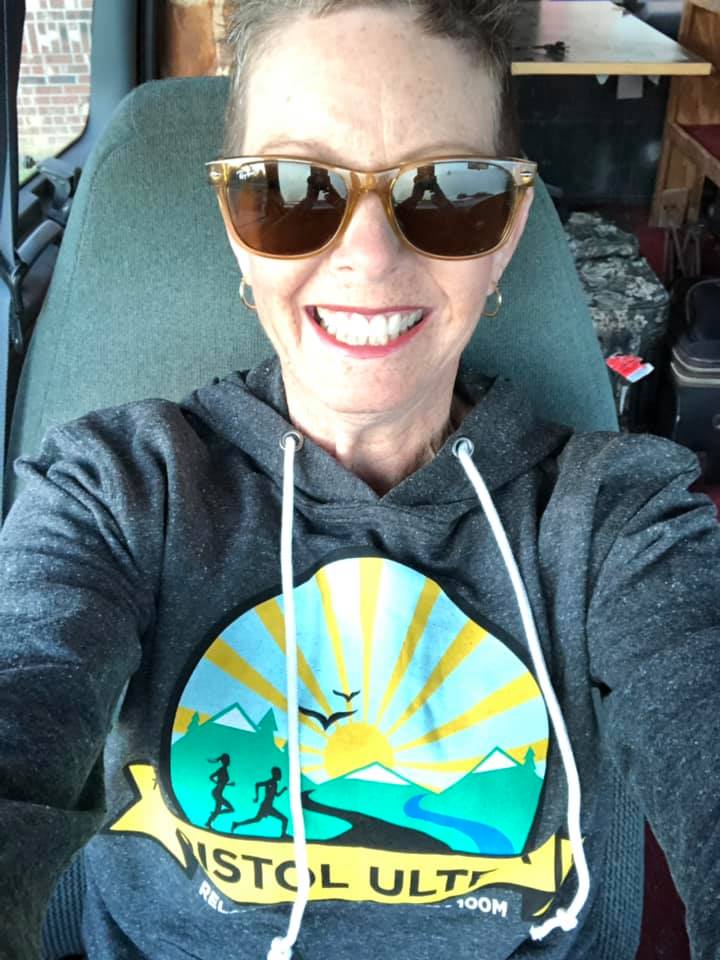