Three weeks ago today, MFH, Tess, Castro and I moved into our new house.  Iowa was having a heat wave and we had purchased a house without A/C.  It was in the upper 90’s that day…just flat out toasty.

#1 Daughter and her MFH were here helping us with the move.  Wowzers but they put in a big day!  They unloaded the truck, carried heavy boxes upstairs and downstairs, to the attic, to the basement.  Every one of us were melting and the animals were suffering along with us. 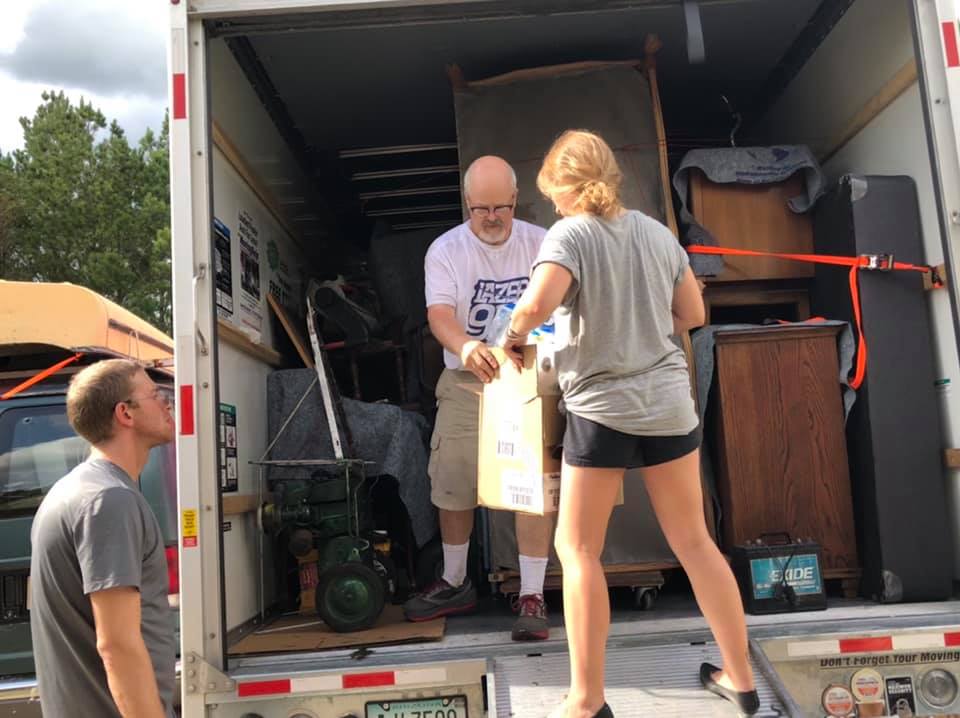 Tess and Alligator walked around the house, you know, checking things out and finally gave it their approval.  Puppy approval is very important when moving! 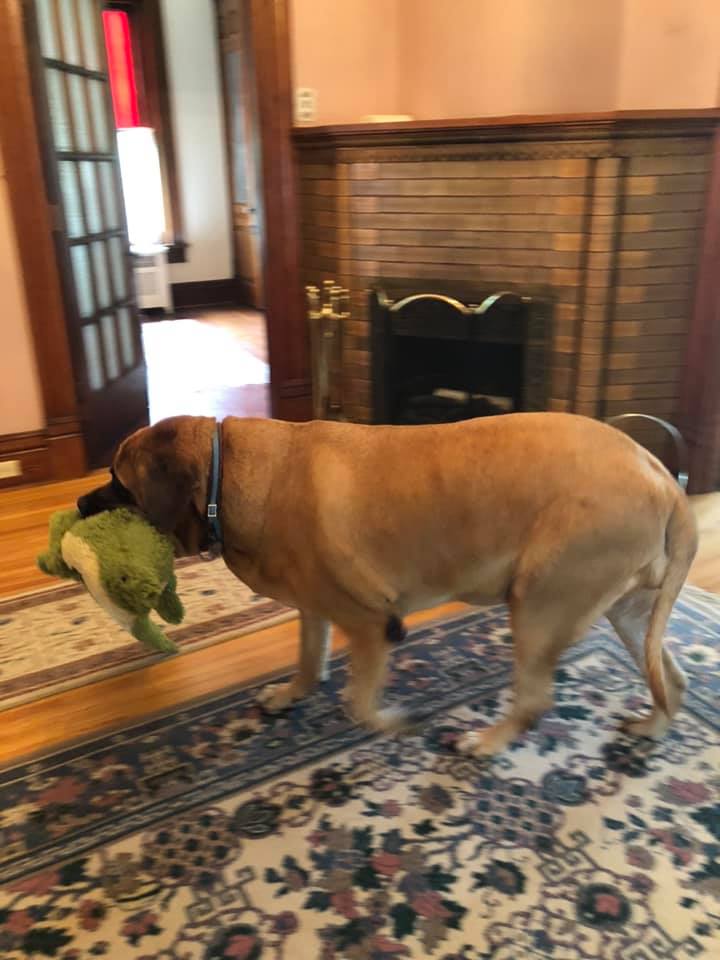 Tess was even happier when she realized that ALL her stuffies had made the move with her.  All this time it had been just her and her #BFF stuffie, #Alligator.  Seeing all her other stuffie friends made her such a happy puppy!!!

Castro was pretty okay with the whole moving thing.  He checked out the back yard and then was okay with the status quo.  I think he figured there wasn’t anything he could do about it anyway.  He’s such a funny kitty! 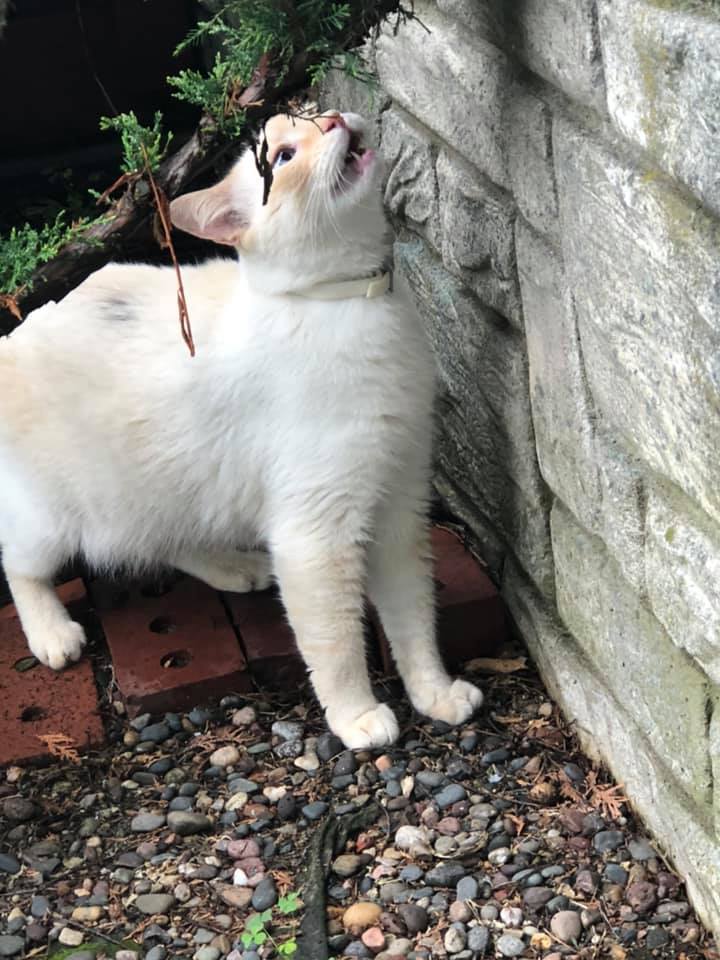 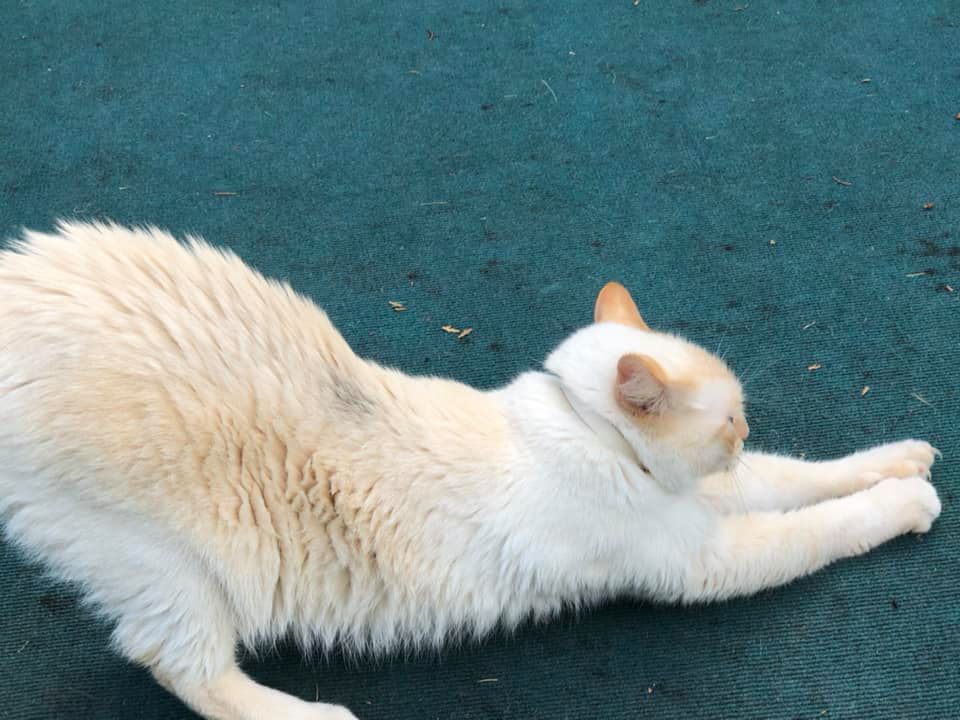 We had bought a few extra fans seeing as the temps were unseasonably warm.  We knew it would cool off in a few days but Tess, especially was very, very warm.

Our first night in the house, Tess was afraid of the stairs and the bedrooms were on the second floor.  She was very unhappy about being left downstairs by herself so MFH suggested I sleep on the sofa downstairs with the extra fan so Tess would cool down and calm down.  She was a nervous nellie puppy (or so we thought).

After an hour of uncontrolled panting, I knew something was up with Tess and decided to take her to the car and run the A/C so she could cool down.  I tiptoed upstairs to get a pillow and the fuzzy blanket plus the keys to the car…and a flashlight!  Unfortunately I woke up MFH.  Poor guy!  He was so tired!!!

I told him I was going to sleep in the car with the dog and he thought I was bonkers!  I knew there was something wrong and this was the best solution I could think of.  I was going to take things to the car in waves because I was dead on my feet.

I toddled off our property and around the corner to where our car was parked on the street (there’s street parking here and we still had the moving truck AND our van in the driveway). I was carrying my pillow, fuzzy blanket and flashlight.  I planned on dropping off the pillow and blanket then coming back for Tess.

I turned around and there was my sweet MFH with Tess on her lead so I wouldn’t need to make two trips!  What a great guy I married!!!

Soon, Tess was in the backseat, I had the A/C blasting into the back of the car (hence the fuzzy blanket) and after another hour of excessive panting on Tess’ part, she finally calmed down and went to sleep.

I woke to MFH tapping on the car window 5:30~ish?  The car was almost out of gas and he wanted us to come back in.  Tess and I stumbled back into the house while MFH drove off and filled up the tank on the car.

After that, I was careful not to get Tess overly excited.  Another night scrunched up in the drivers seat of the car was not appealing and it had been very hard on sweet Tess.

We went about unpacking.  My In~laws visited and dropped #1 Daughter and her MFH at the airport in Cedar Rapids for their return flight home.  MFH, Tess, Castro and I started making the house a home and learning the ropes of living in a new place.

Castro was busy hunting in our yard.  We have a squirrel that loves mocking him from way up high on our fence. It drives Castro nuts and keeps him entertained.

Tess went about learning how to climb those stairs. 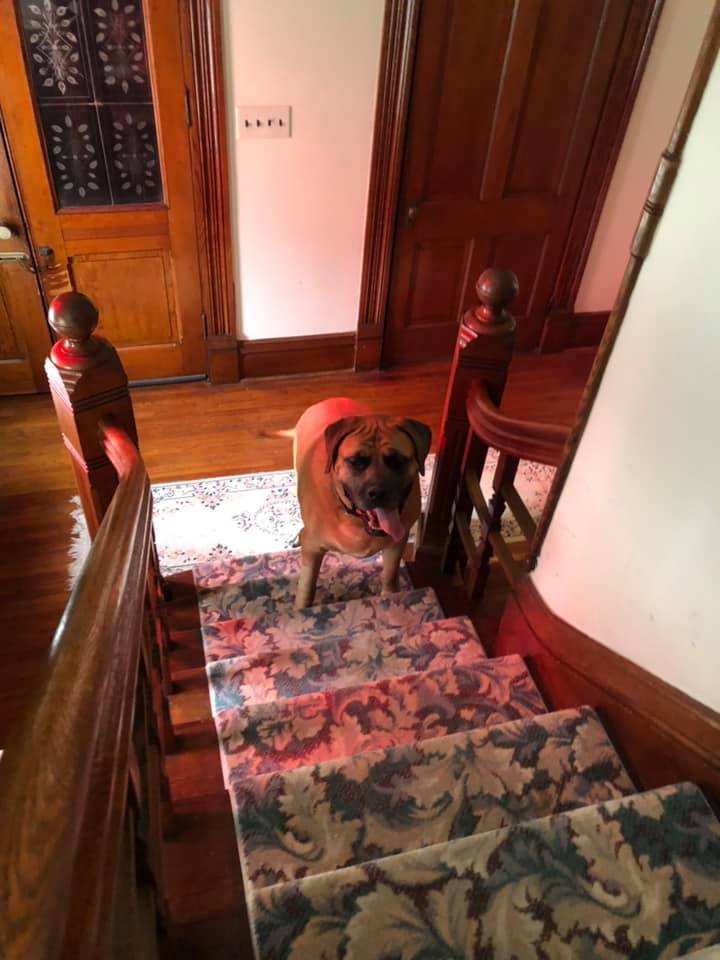 She was a determined puppy!  We had a huge celebration when she made it up to the landing!!! 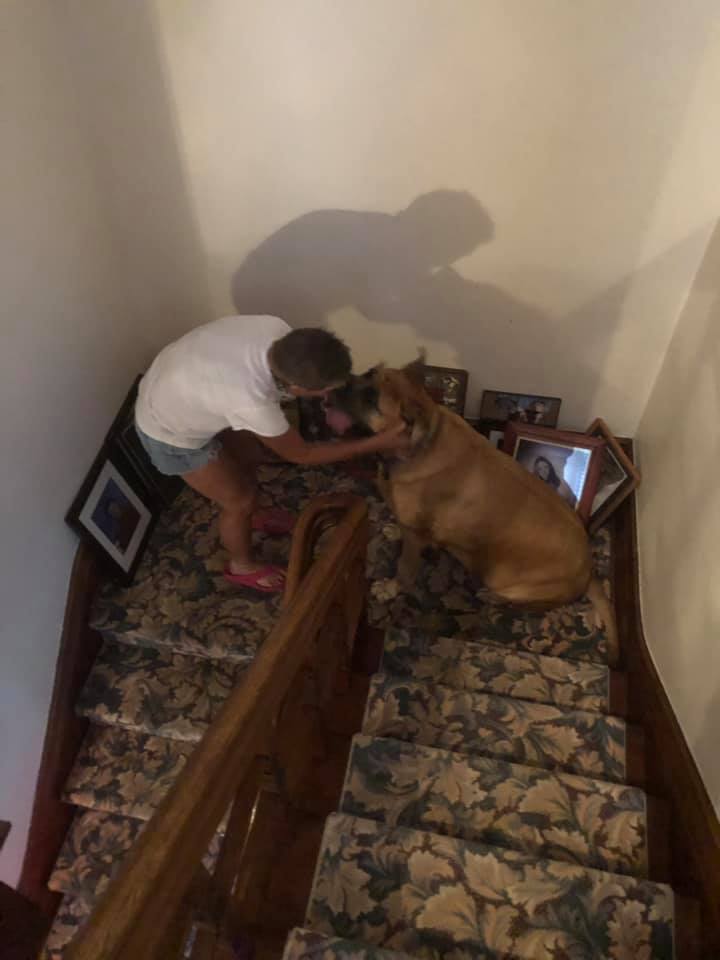 The landing kind of turned into her arch nemesis.  She would get so tired climbing the stairs!  The landing was the perfect place for a rest…a LONG rest.  I think she only made it to the tippy top of the stairs three or four times.

Funny how after that day, it’s like she had finished her bucket list.  Strange how that happens?

I had noticed during that night how her breathing/panting sounded like she was in pain?  I thought that was odd.  I HAD noticed that she was getting all the little lumps popping out like Paxton did right before he passed.

I told my self, No. That’s just too weird.  The vet had never seen anything like that before.  Two of our dogs back to back, within 1.5 years!?!  That’s not possible!!!

The very next day after my run?  I knew things were very, very bad.  Unfortunately due to some medication and it’s residual side effects, (I kinda have to plan my life around the timing of this goofy stuff) I was stuck at the house but I also knew she needed to go to the vet pronto!!!

I called MFH at work.  I felt awful about it seeing as it was only his second week at his new job but Tess was in a very bad way!  Bless him, he came home and took her to the vet.

While he was driving home from work,  I needed to find us a new vet!  Yikes!  Thank you, Google!!!

After an exam, they didn’t feel a blockage.  Blood work came out normal.  They gave her puppy anti nausea meds (she’d puked 5 times that day…waaayyy too much, and had been puking substantially more leading up to this day) and bland, prescription dog food.

She took the anti nausea meds.  After that, (Wednesday evening) she refused all food and water.

That night, she woke me up.  Mom.  Mom!  I don’t fell well.  I need out.  I grabbed my Oofos and started walking down the stairs to let her out.

She made it as far as that goofy stairway landing before she was too tired to go any further and laid down.  She was very obviously in a lot of pain.  I laid down on the landing next to her and tried to comfort her.  We spent the night on the landing.  It took her quite a while to relax.  Every now and then her discomfort would return and I would pet her and tell her what a good girl she was until she felt better again. 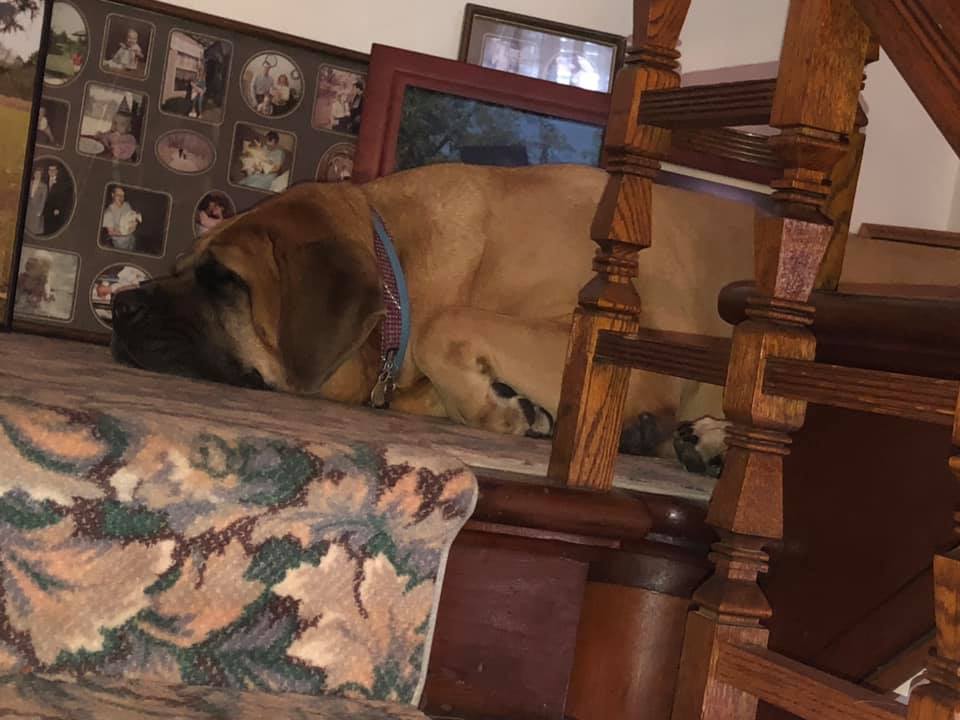 We tried all day Thursday to get her to eat/drink.  She turned her puppy nose up at it.  I called Thursday afternoon to try to get her in but they asked we wait until Friday morning.  I made an appointment.

Friday morning, I took her straight back to the vet.

The vet wanted to do Xrays or an ultra sound Friday morning.  I signed permission and left Tess and Narwhal at the vet, went home and waited for the phone call with results.

The results were not good.  They had done the ultrasound without any sedative.  What they found was Tess’ spleen floating in fluid.  They also found her liver was abnormal and those little bumps were growing all over her insides.

Without any sedative, they used a needle and retrieved a sample of the fluid in her abdomen.  They wanted to know what it was?  100% blood.

She was bleeding internally.

It breaks my heart knowing she was soooooo sick!!!

It was cancer.  First Paxton and now Tess.  My heart could barely take it.

I told them MFH and I would be in to put her down.

I packed #alligator.  Alligator has always been her very favorite stuffie.  There was no way I would make her face this without him!

The vet said she’d been lounging all day on the futon using Narwhal as a pillow.  She’s always been a good puppy for relaxing!

I sat on the floor next to Tess and didn’t leave her side for the remaining 20~ish minutes of her puppy life. 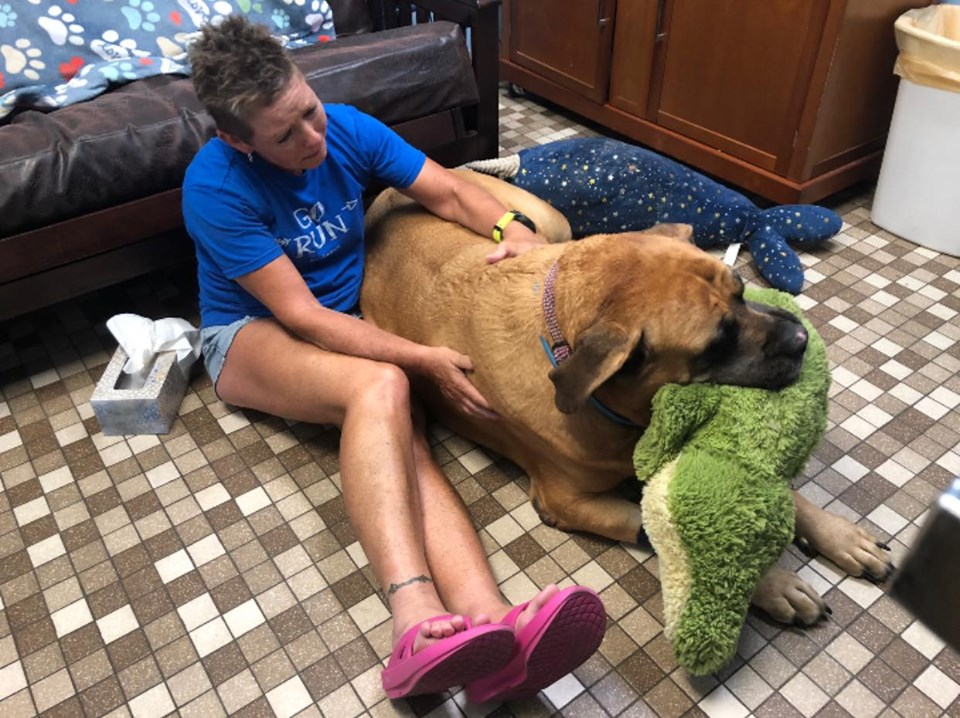 I was bawling my eyes out.  It was soooo hard to lose two puppies so close together from the same thing!!!  They were soooo sick and felt sooo awful!!!

Then, she did the exact same thing Paxton did. She gave me a puppy kiss, laid down and let the vet give her the meds. 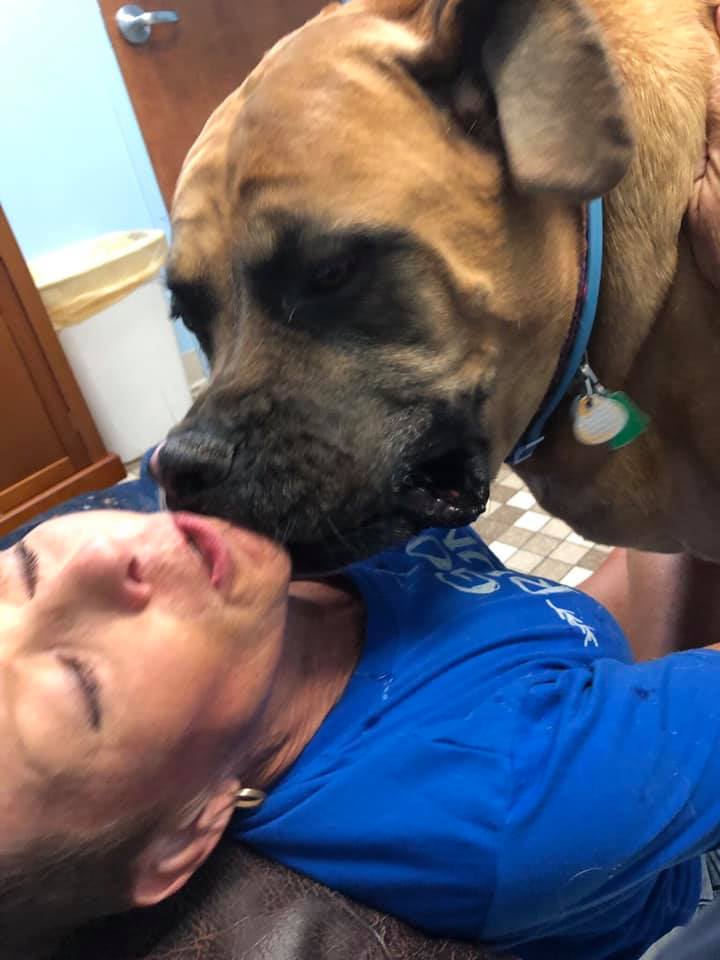 This is my very last puppy kiss from Tess.  I still can hardly look at this pic.  She knew what was happening.  She was telling me she loved me AND she was saying goodbye.

Why do dogs have to be so awesome!?! 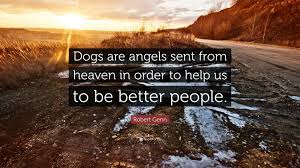 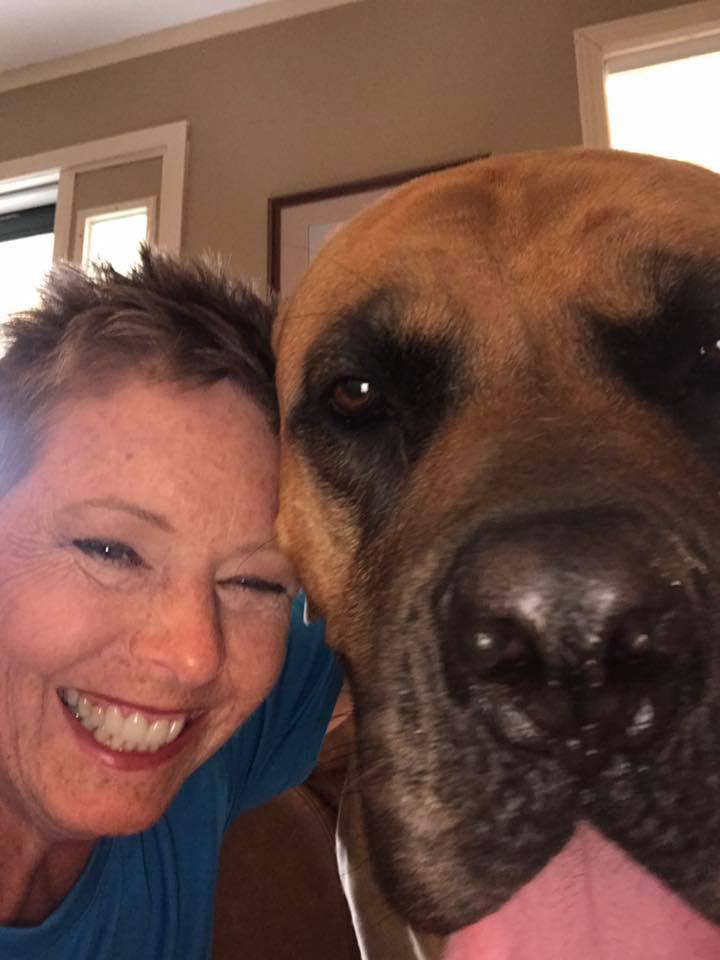 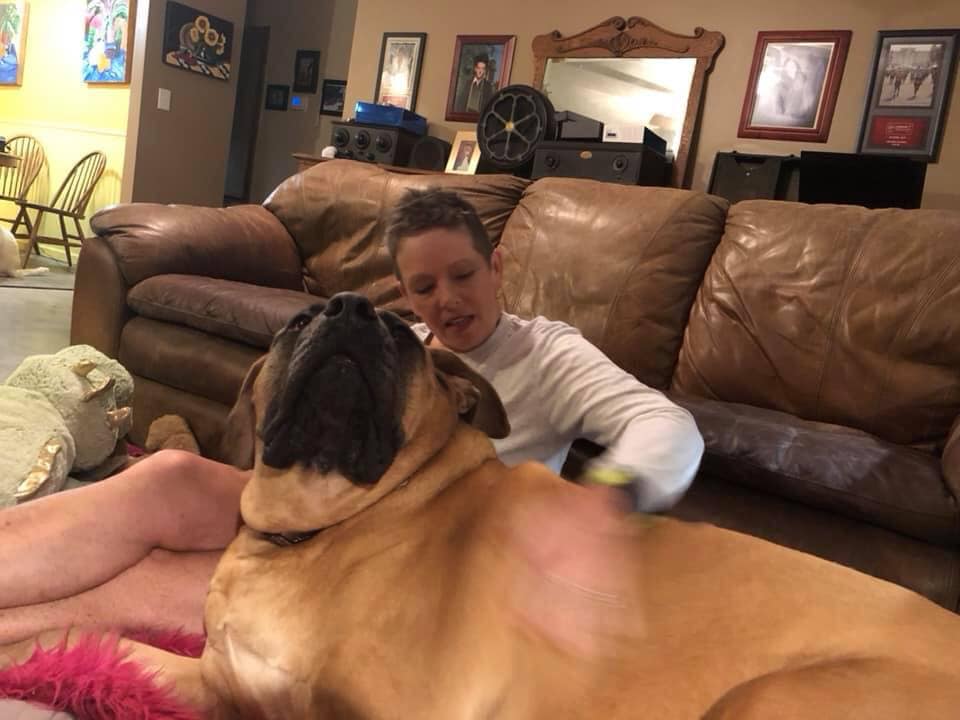 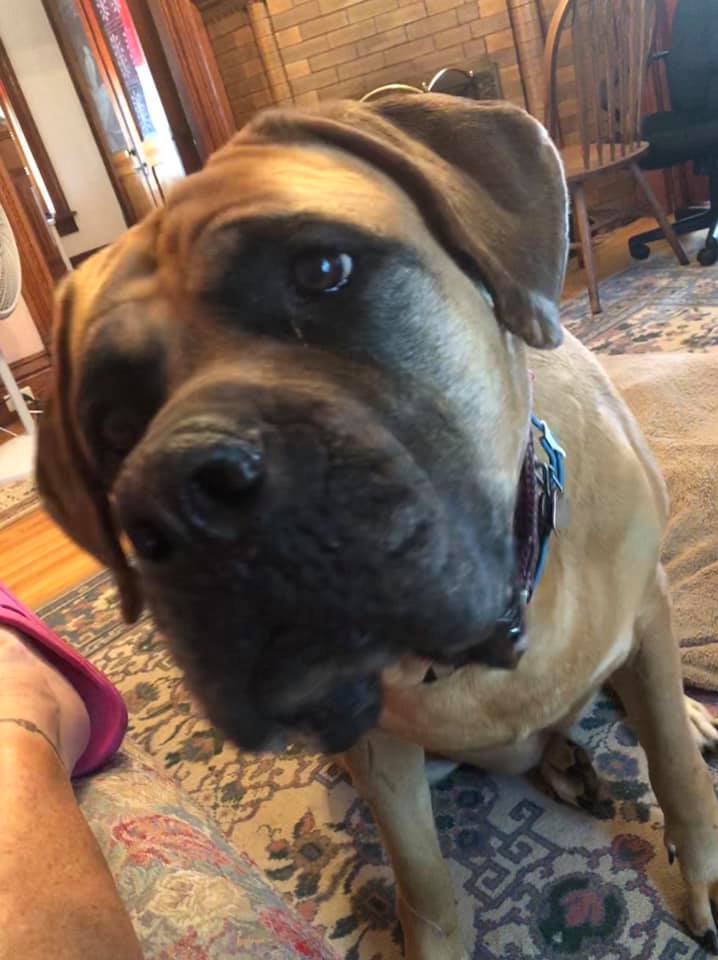 *Tess, Alligator and Narwhal were cremated together.  They kept each other company all the way to the very end.