I was prompted today to remember my old Schwinn Varsity bicycle.

When I was younger I had a Schwinn StingRay bike.  When I got to be about 10 or 11 the neighbor wanted to buy my  StingRay to make a trick bike.  I sold it to him and rode on an old piece of junk for a little while.  I could tell that my parents were not very impressed with the trade I had made.

Anyway, soon after that both my younger brother and I got new 10-speed bikes for Christmas.  They were Schwinn Varsity.

A bit later a friend of mine asked me if I wanted to go with him on RAGBRAI, the bike ride across Iowa.  We went.  We were 13 years old and on our own.  (We had camped out before in Boy Scouts and such, so we knew at least a little bit about it, not much.)   RAGBRAI III, 1975, the summer between 7th and 8th grade.  I rode my Varsity. Road it again in RAGBRAI IV the next summer.

I had that bike until I graduated from college in 1986.  Soon after that it was stolen.

You should know this:  a Schwinn Varsity weighs a ton.

Here is a picture of a similar bike, same color as mine.  (picture credit to “The Stuff” website)  I think my brother’s was blue. 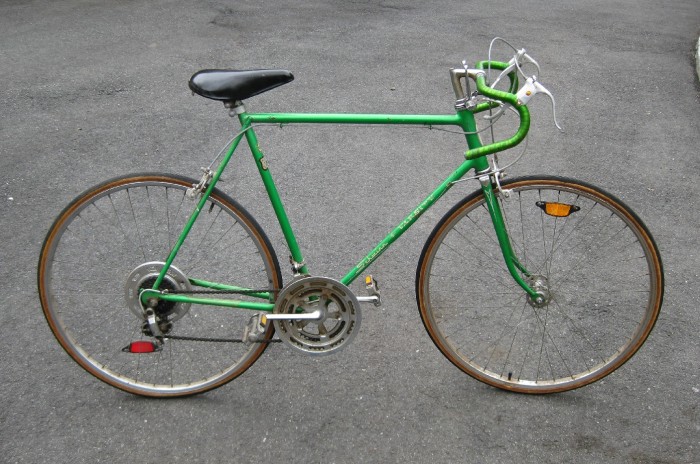