Things have been a bit crazy at our place recently and I haven’t been blogging.  I really haven’t had much to share aside from, I’m training for a couple of races.  Decided not to bore you with, I ran X number miles today kind of blogs and wait until race #1 was in the books.  That race was this past weekend and it was a dream come true weekend!

You’re asking, Did you win or something!?!  Good heavens, no!  Too funny!!! I did follow my coach’s instructions to the letter and I think I deserve a gold star by my name for that!  It’s not often I do that.  I have a tendency to push it a little bit but not this weekend.  Too much was a stake and we still have one more race in 17 days.  I don’t want to mess anything up. 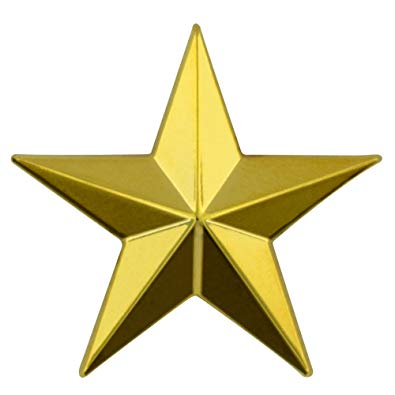 This past weekend was the Detroit Free Press Marathon. For the first time ever, I doubled up on races for the weekend running the 5k on Saturday and then the Marathon on Sunday.  Under normal circumstances I would have “just” run the marathon and had a great weekend.  This weekend was not normal circumstances and I wanted everything to be perfect!

Friday evening you would have found me at packet pickup with my IRun4 buddy Aiden and his parents.  Aiden and his dad were registered for the 5k on Saturday.  We hit the Expo together to get our bibs and see all the goodies for sale. 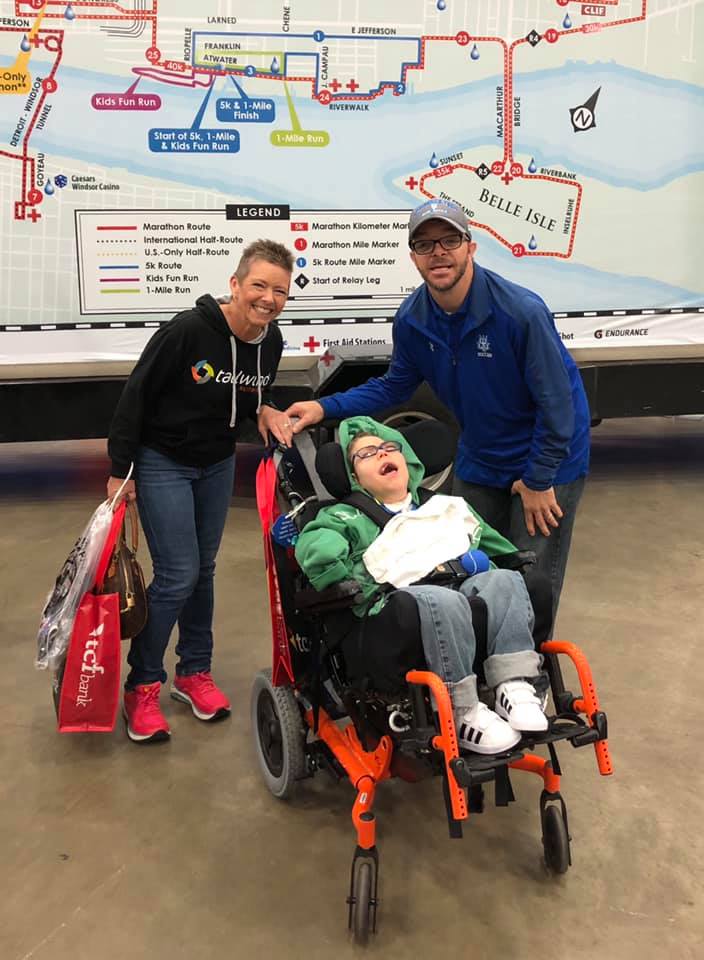 I love Expos!  So many fun things to see and buy~I always want to buy everything!!! This time I picked up a few things but not tons.  MFH (My Favorite Husband) should be proud.

It was fun to bump into a couple of online friends at the Expo, too!   The running community really is full of amazing people!!! 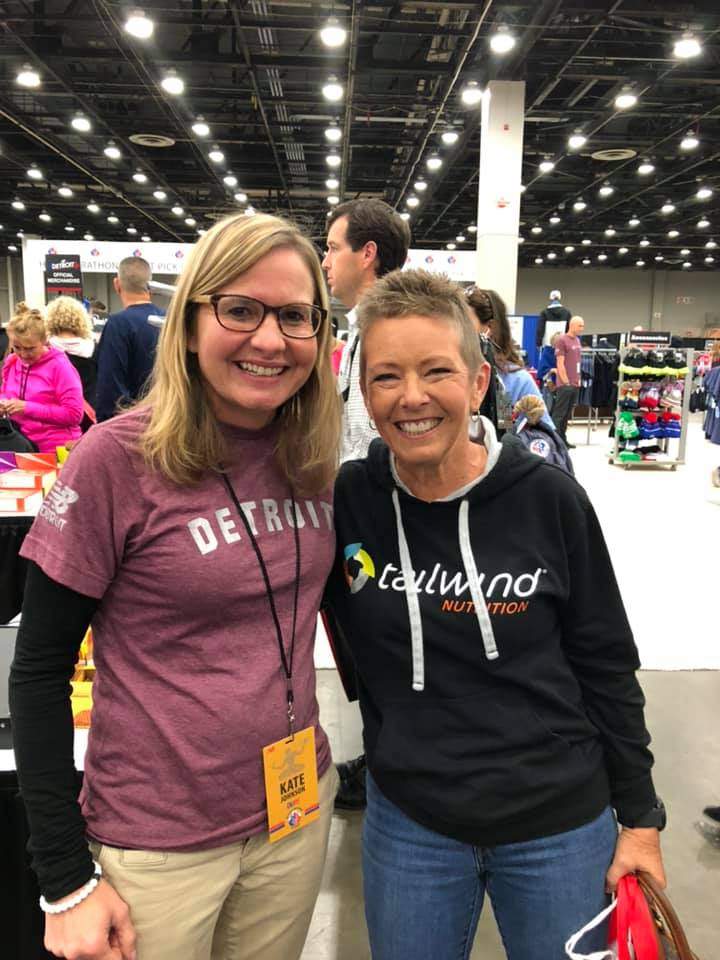 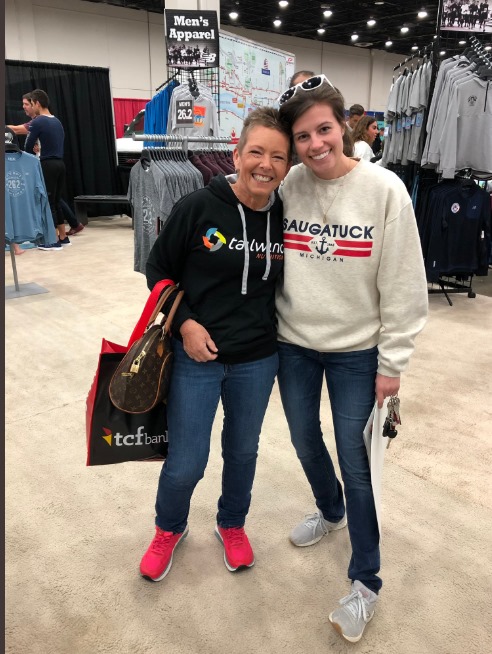 After the Expo, Aiden’s parents, Aiden and I grabbed dinner.  We went to Slow’s BBQ in Detroit and I’m here to tell you, that was the most amazing thing I’ve ever had in my life!  Holy BBQ Sandwich!!! 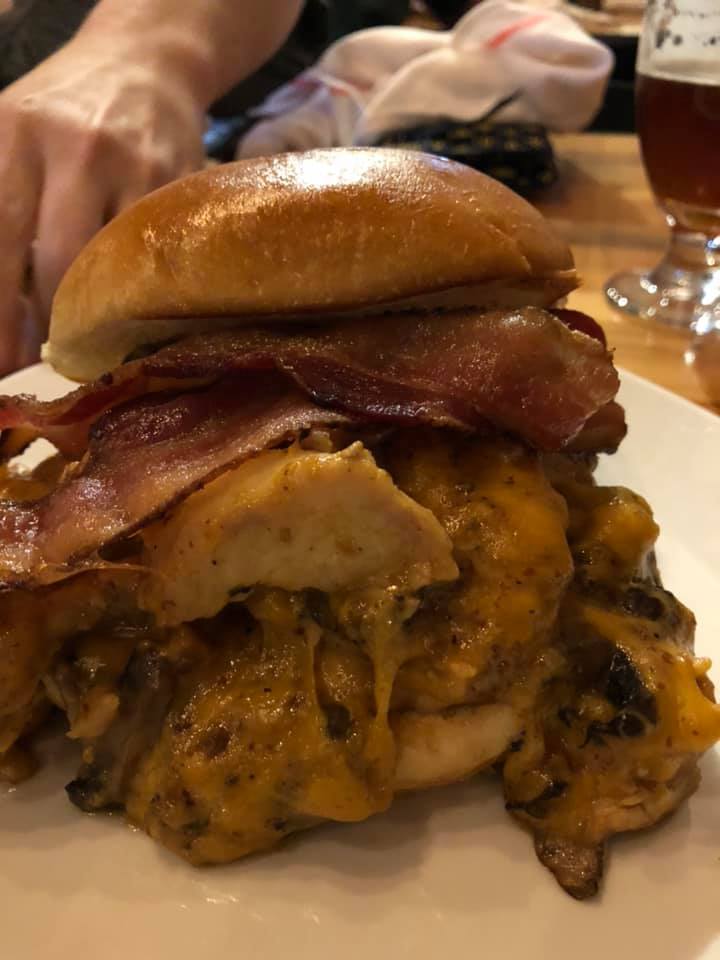 Early o’clock Saturday, we all met at the starting line for the 5k. Aiden’s uncle Jason was there, too!  Loved meeting and running with him through the full on Sunday!!!  Nicest guy ever!

We grabbed a quick pic before the race and then we were off!!!

This was Aiden and his dad’s very first race!  It was a huge honor to get to share it with them.  I’m telling you, those two guys can run!!!  ZOOM!  It was so exciting to be with them when they earned their first bling!  #AlwaysEarned

I gotta tell you, Aiden’s mom was an “A” #1 photographer this weekend.  She captured so many great memories with her phone!  I can’t thank you enough for all the terrific pics, Andrea!!!

After the race, I met up with some other friends.

See, I found out that two of my Mississippi running friends were in town for the race!  How awesome is that!?!  There’s no way I’d pass up the opportunity to meet up with fellow #MScoffeerunners.  We met up at Buffalo Wild Wings and enjoyed wings and beer, caught up on old times, travel stories and fun things like that.  Then I grabbed a total stranger to take our pic…some teenage kid who looked like he’d rather die on the spot than a take pic of us.  I felt moderately bad for him but decided that it #BuildsCharacter and everybody needs more character, right? 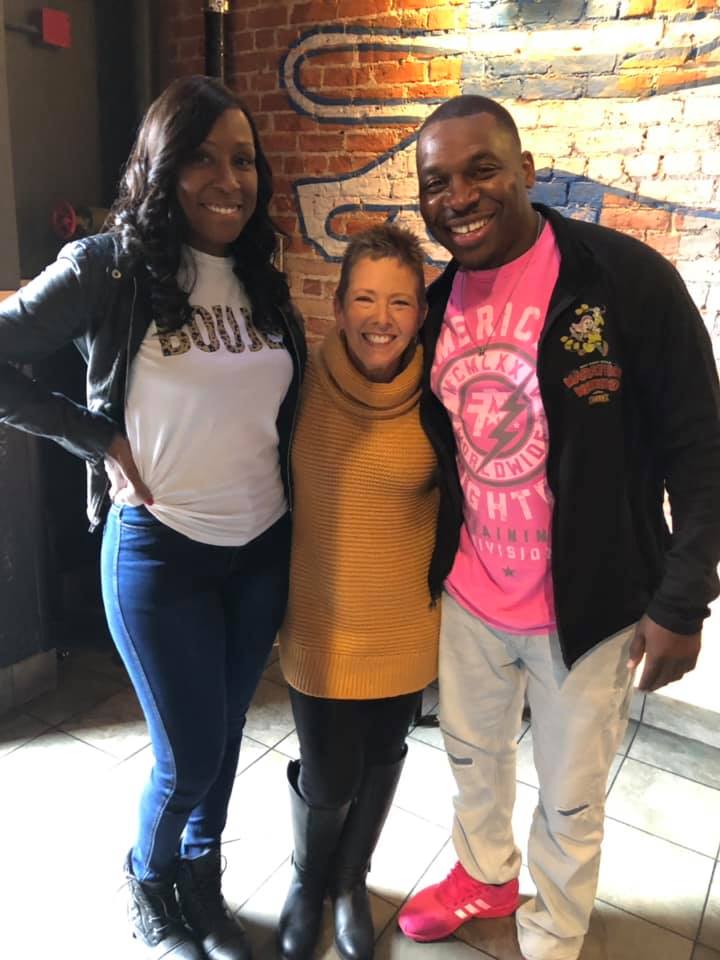 Soon it was time to hit the sack and get a little sleep before my early o’clock wake up call for the marathon the next morning. I put out my race stuff, took my Flat Melinda pic and was asleep immediately. 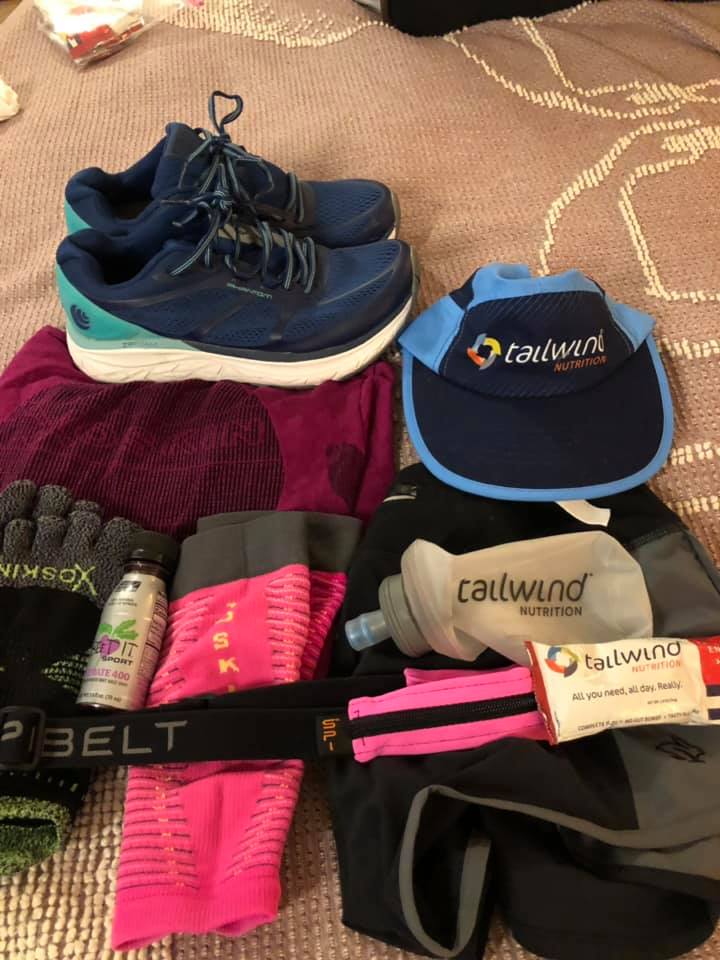 See, I discovered Saturday morning that I’d entered EST and had lost an entire hour.  The thought had never entered my mind that I’d be traveling to a different time zone!  It was just an hour but when you need to get up at 4:00am for a race which turns into 3:00am…I’m just a sissy, I guess? Needless to say, I felt that lack of an hours sleep!

Soon, I was up and ready to roll.  I called an Uber and rode over to the start.   The Uber driver had quite the time getting me to our arranged meeting place because all the roads were already closed for the race.  She got me pretty close and I walked it the rest of the way in.

We all met up before the race and soon it was time to toe the line!  Woo~Hoo!!!

This race begins right before dawn so we had just a little bit of dark o’clock running.  It’s very well lit so you didn’t have to worry about tripping over people or obstacles.  YAY, right? 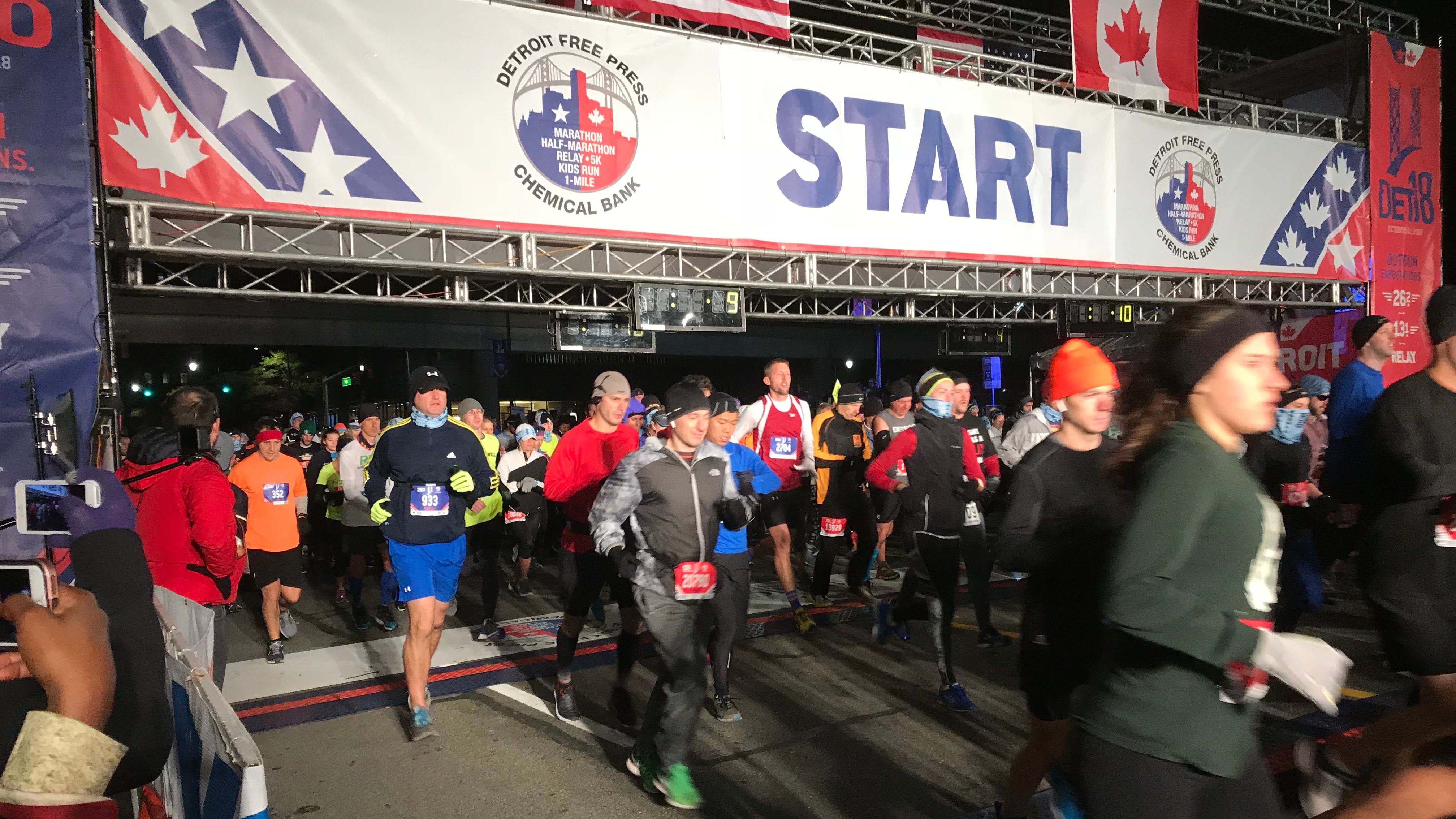 It was a blast running the Ambassador Bridge into Canada!  Holy Cow that bridge was fun!!!  Guess I didn’t realize how early into the race you hit the bridge? Loved watching the sunrise and running into a different country~coolest thing ever! 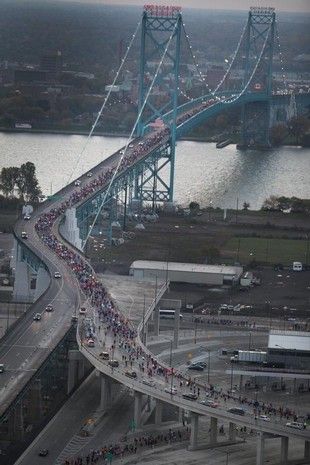 The boarder control people were gracious but watching carefully for those “just in case” instances of someone who might try something silly when entering their country.  Can’t blame them.  That’s their job!  Still, it was tons of fun being greeted with, Welcome to Canada!  I loved it!!!

After an hour’s spin through the streets of Windsor, Ontario it was time to head back to the States but this time through the tunnel. This is actually pretty cool!  Here’s a quote from MDOT:

“The Detroit – Windsor Tunnel is the only vehicular international sub aqueous border crossing in the world. It has been recognized as one of the great engineering wonders of the world and is the second busiest crossing between the United States and Canada. Located between Detroit, Michigan and Windsor, Ontario, connecting the US Interstates to Ontario’s Highway 401, it is one of the fastest links between Ontario and United States.” 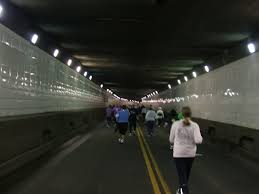 Aiden’s Uncle and I saw Aiden and his family as we crossed the Half Marathon timing mats.  We hollered at them that we’d be a little later than our original finish time. I needed to dial back the pace a little bit.  #Oops! 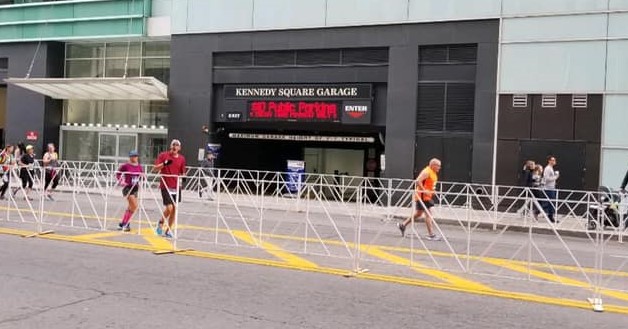 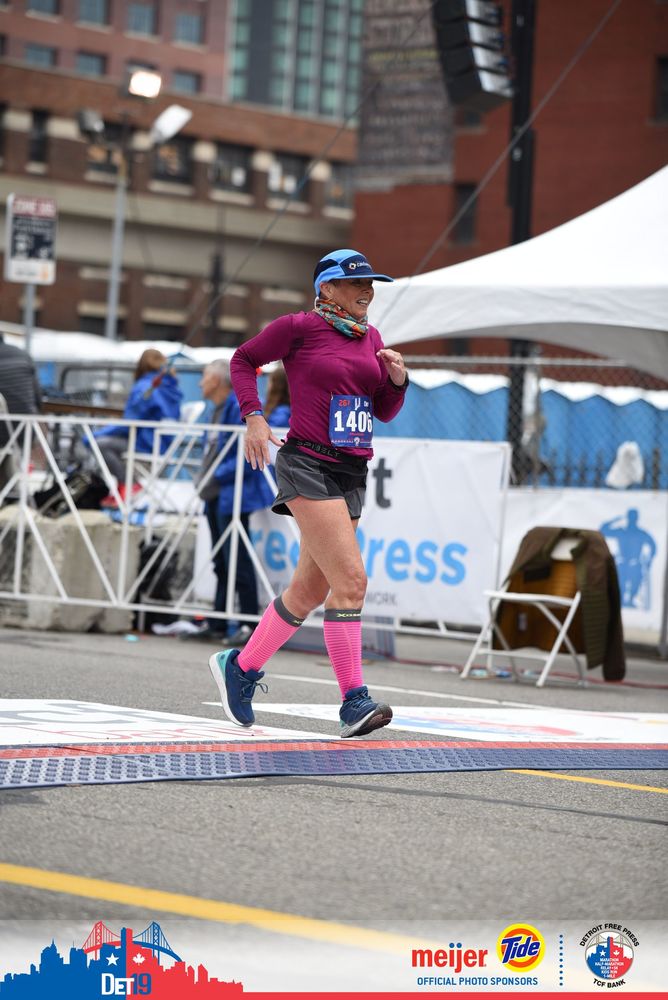 See, I was under orders from my coach.  This was a training run for my 50M in 2 weeks.  I was NOT to race Detroit.  It about killed me not to race but that 50M is kind of important.  If I ran hard at Detroit, I’d probably crash and burn at the 50M.  Better safe than sorry, right?  All of that to say, I’d switched the running into low gear.

Jason, Aiden’s uncle was so sweet!  He stayed with me the entire race even though he’s usually a 3:30(ish) marathoner.  This uber slow stuff was a new thing for him.  I’m not sure he was a fan?  He was a very good sport about it! 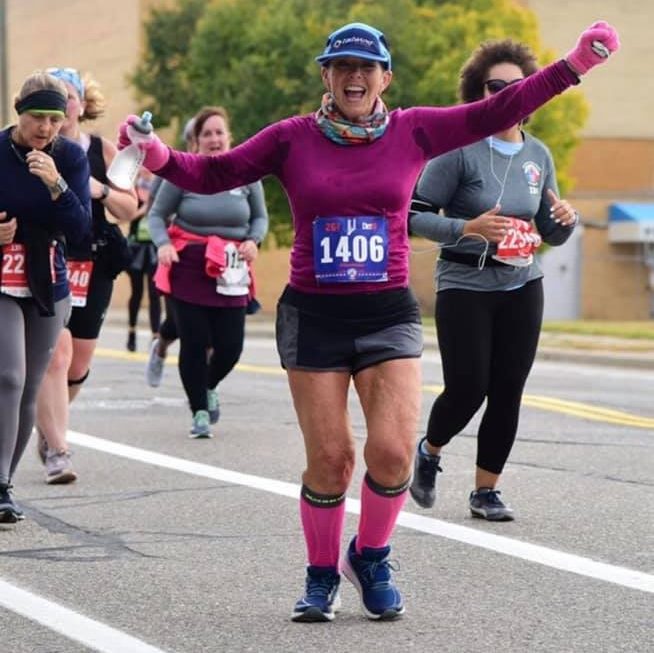 I learned that it’s difficult to run a marathon without a taper.  To be honest, I didn’t expect this race to be such a challenge? I discovered my legs were very tired.  The rest of me was fine and raring to go but my legs were tired.  The thought of meeting Aiden and his parents at the finish were what kept me going through the last 10k of that race.  I was so excited to be able to give Aiden his medal AT the race instead of having to mail it off to him! 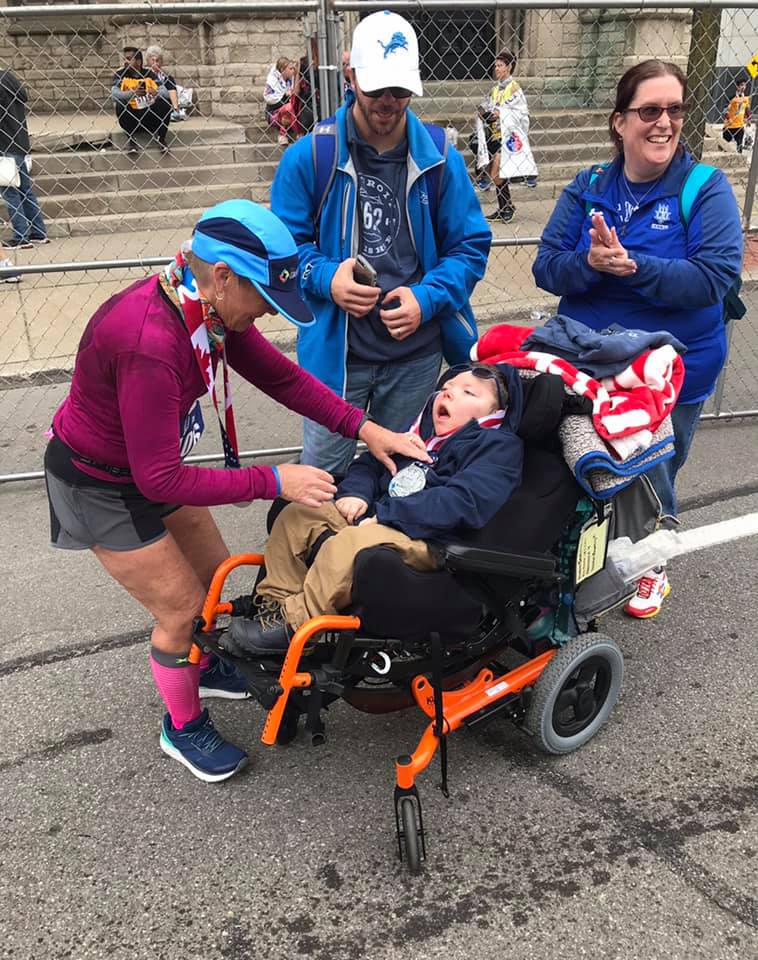 That moment, right there, made all those brutal training runs…you know the ones~the ones where everything hurts so bad that you want to sit in the middle of the trail and cry?  That moment, putting the finishers medal around Aiden’s neck made every single step worth it.  I’ll never be able to explain how special that was.

My heart is full.

Now I’m on a mission to earn Aiden a buckle.  This amazing boy NEEDS a buckle and I intend to earn one for him!

Thanks for following along on Aiden and my adventures.  This sweet boy changed my running 360 and there isn’t anything I wouldn’t do for him. 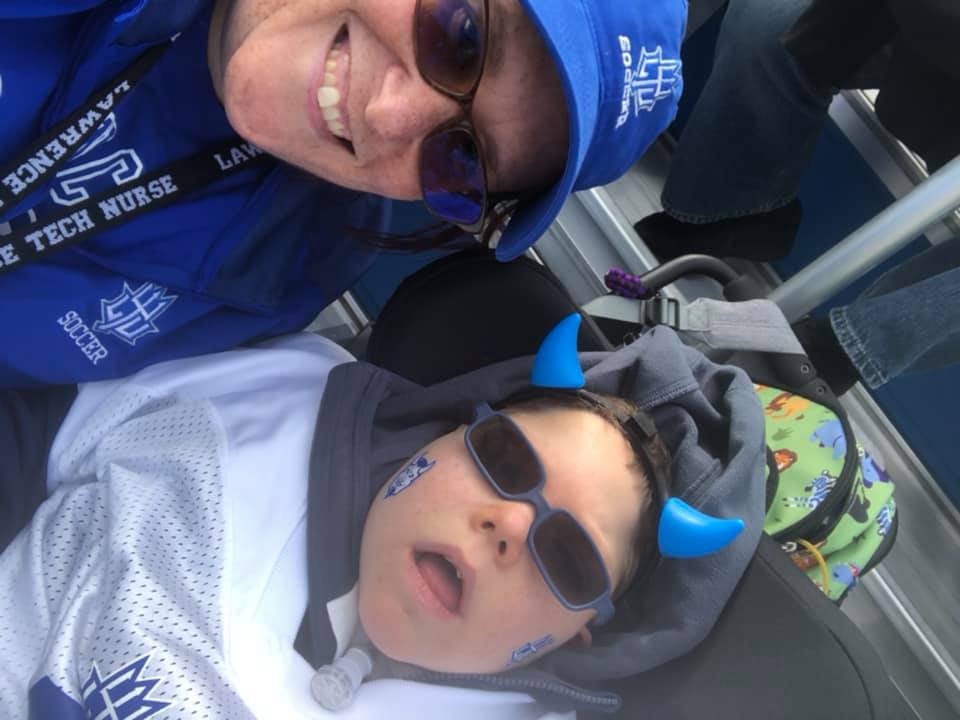