April 9, 2015 I opened my email and found at the top of my list an email from the FB group, IRun4Michael.  I hurriedly opened the email to find these words:

Congratulations! You have been matched in I Run 4!

It was probably one of the most exciting emails I’d ever received!!!

Eight months prior (give/take) I had put in my name to be matched with a buddy in the IRun4Michael program.  I had other running friends who had buddies through this program.  Over time I’d watch them develop amazing relationships with their buddies and families.  Their objective for running changed in that their reason for running was different!  It wasn’t for themselves anymore, it was for their buddy.  I knew I wanted my miles to matter so I signed up to be a runner for somebody.

I had no idea it would take the substantial part of a year before I would be matched.  Sometimes the waiting was almost unbearable and other times it would be in the back of my mind but I was always waiting…waiting…waiting… SO,

When I opened that email on April 9, 2015 you’d better believe this runner was doing the happy dance!!!  I finally had a buddy!!!  My miles would finally matter!  Things would change!

Y’all, there’s no way I can ever begin to tell you how life-changing a thing it has been to be Aiden’s runner.  I *thought* I knew how it would be from watching my friends and their buddies?  Nope.  Not even close.

Aiden was all of 3 years old when we were matched.  He was a fighter even back then!  He had defied the odds and the doctors but was still with us by the time I came on the scene.  He already had that mega watt smile!  Holy cow but he can light up a room with that smile of his!!! 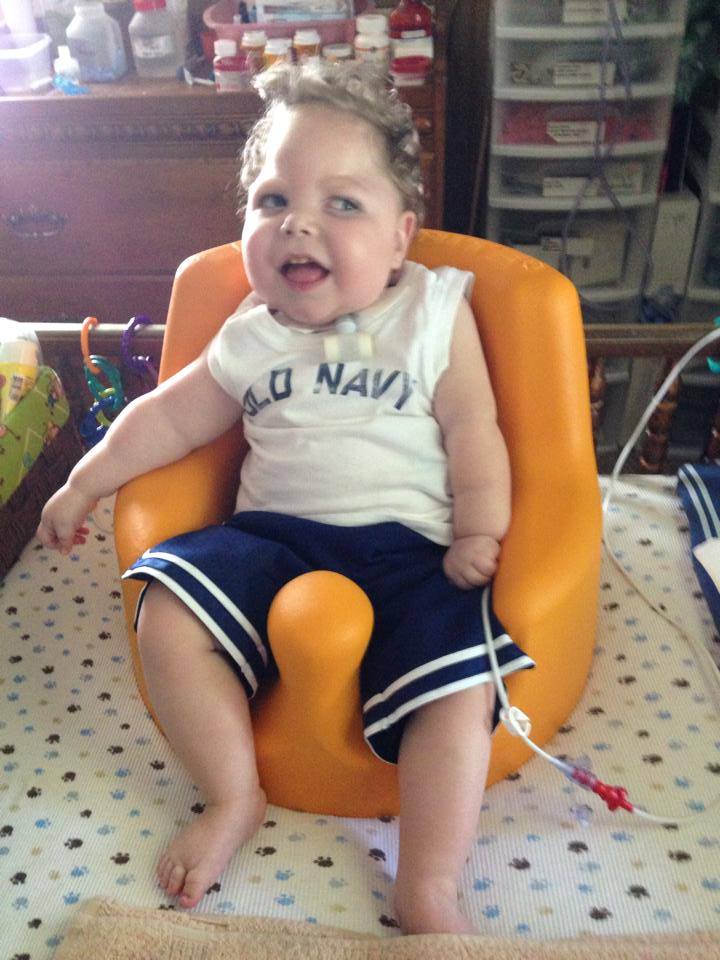 It was love at first sight.

Aiden totally and completely had my heart from the very first second I saw his pic.  Learning about all his medical challenges and how he faced life with that smile of his, seeing his parents and grandma and grandpa love on him with everything they had…I was determined to be the very best runner for him I could possibly be.  He deserved the best.  I didn’t want to be a dud runner.  I wanted to be somebody he would be proud to have as his runner!

I think our first race together as buddies was the Coke 10k in Corinth, Mississippi. *Best 10k in Mississippi BTW* It was about a month after we were matched.  It was so exciting to be able to earn some race bling for Aiden so soon after being matched! There’s nothing I love more than earning medals for Aiden and sending them off to him!!!  Together we’ve managed to fill up a few medal racks over the years.  This is the one we’re working on at the moment.  Aiden sets the bar high and is making us work hard for our bling these days!!! 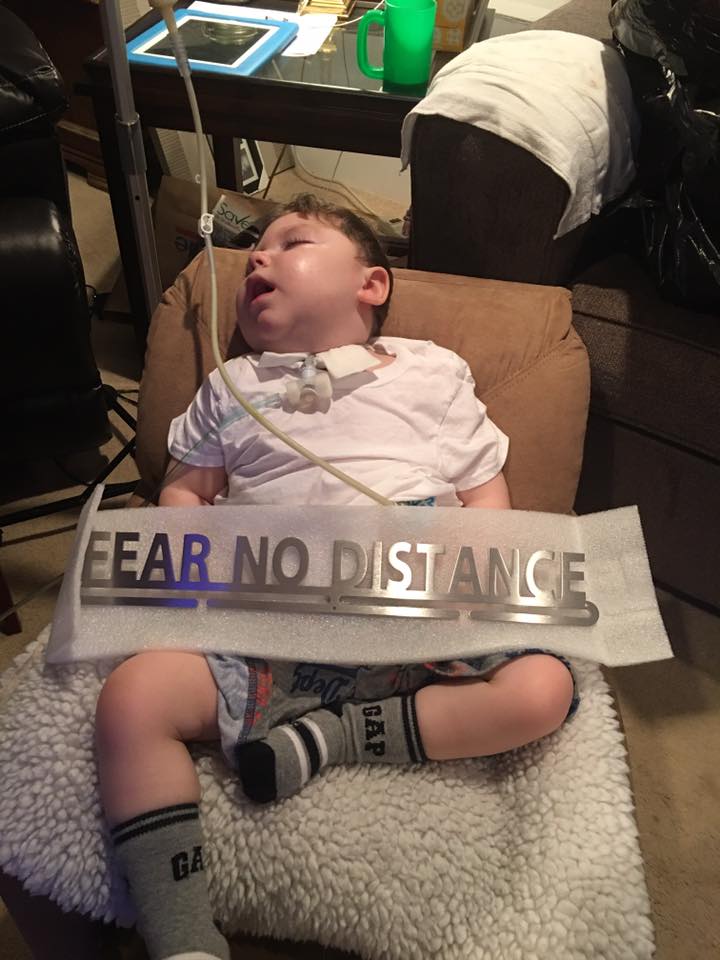 When we’re not running, what does Aiden like to do?  He loves to swing.  Swinging is probably pretty close to the tippy top of his favorite thing to do. 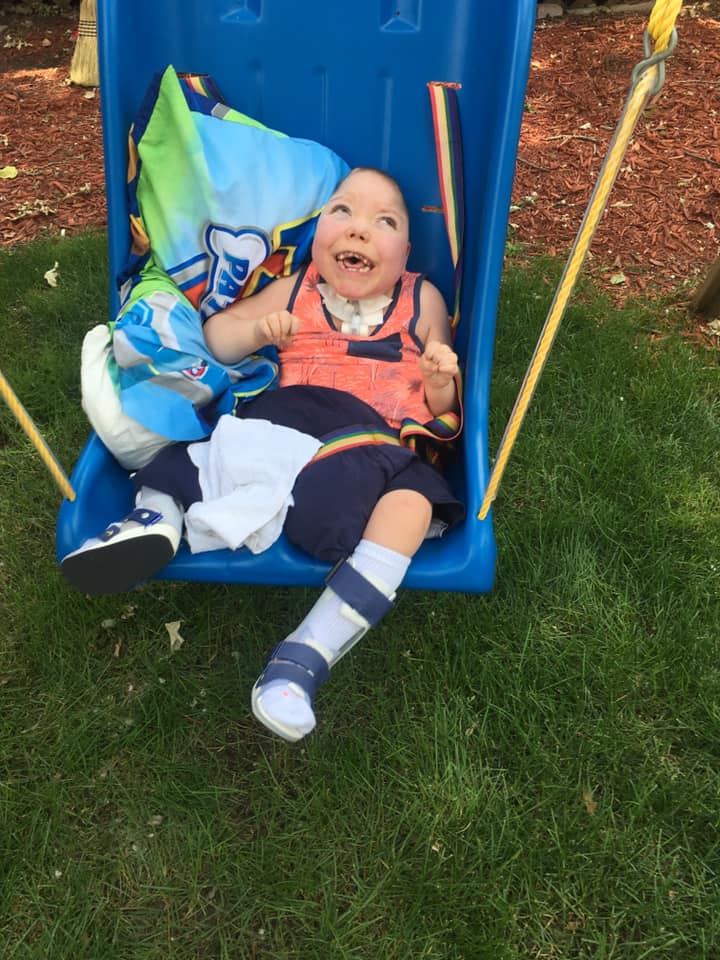 Swimming is a favorite as well! 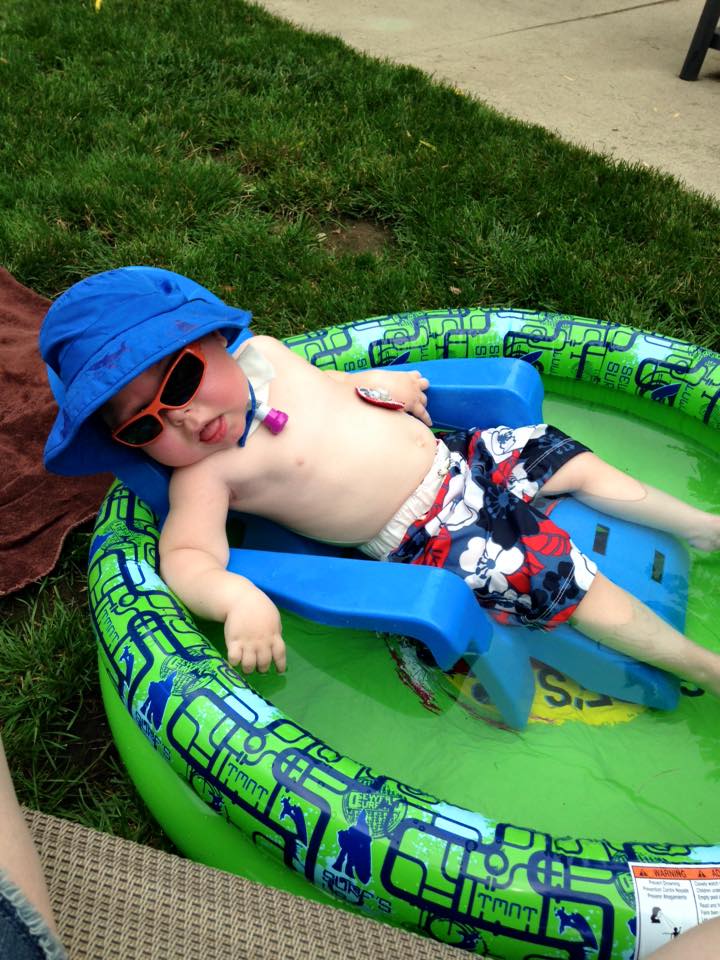 Winter time there’s always sledding.  I’m pretty sure he likes the chilly temps a whole lot better than I do.  Brrr!!! 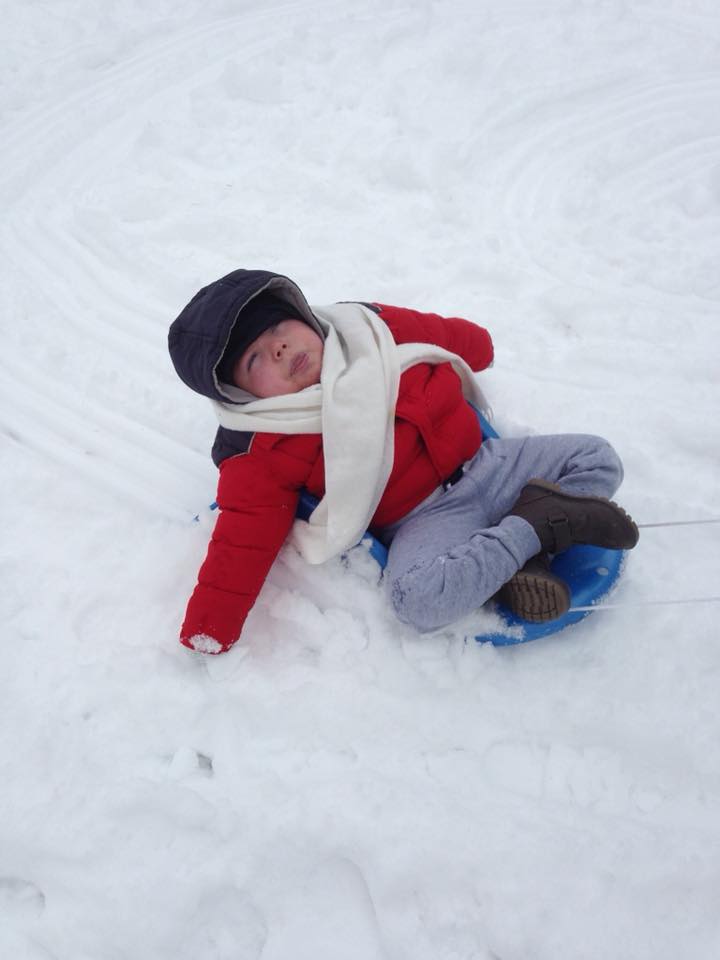 He’s had a few pretty serious medical procedures done during the 5 years we’ve been buddies.  The first one was a trachea reconstruction.  That one took quite a bit of recovery time.  It’s so easy to pick up little bugs when you’re in the hospital!

The second pretty serious medical procedure was just this past February when he had a Hemispherectomy.  They removed the left hemisphere of his brain in an effort to stop/control his seizures.  He bounced back from this surgery pretty well, all things considered! 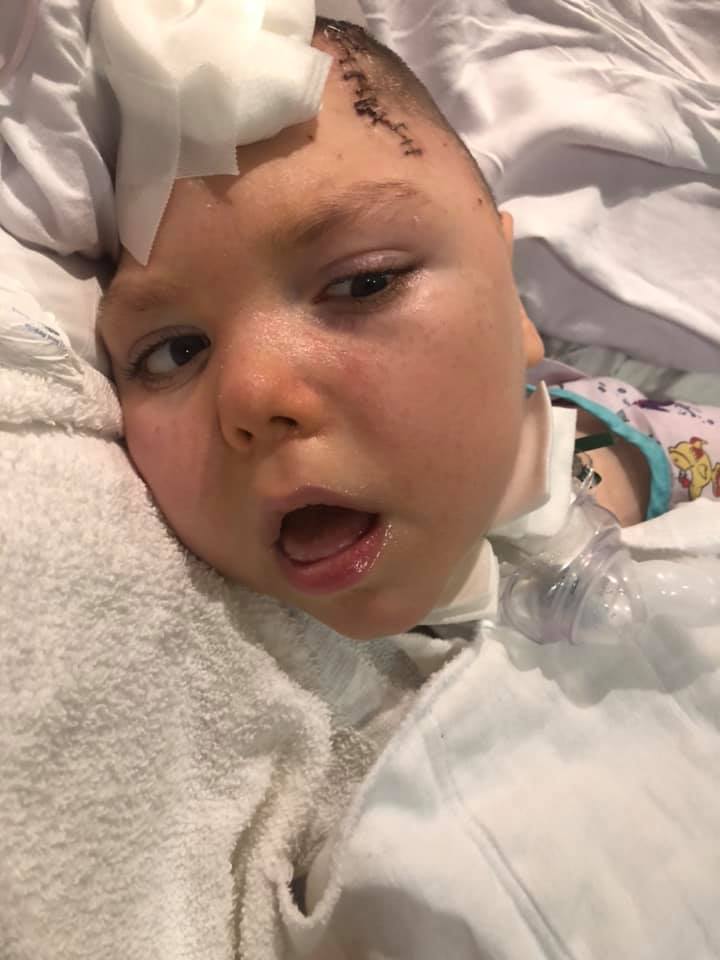 He loves dressing up for events at school and Halloween! 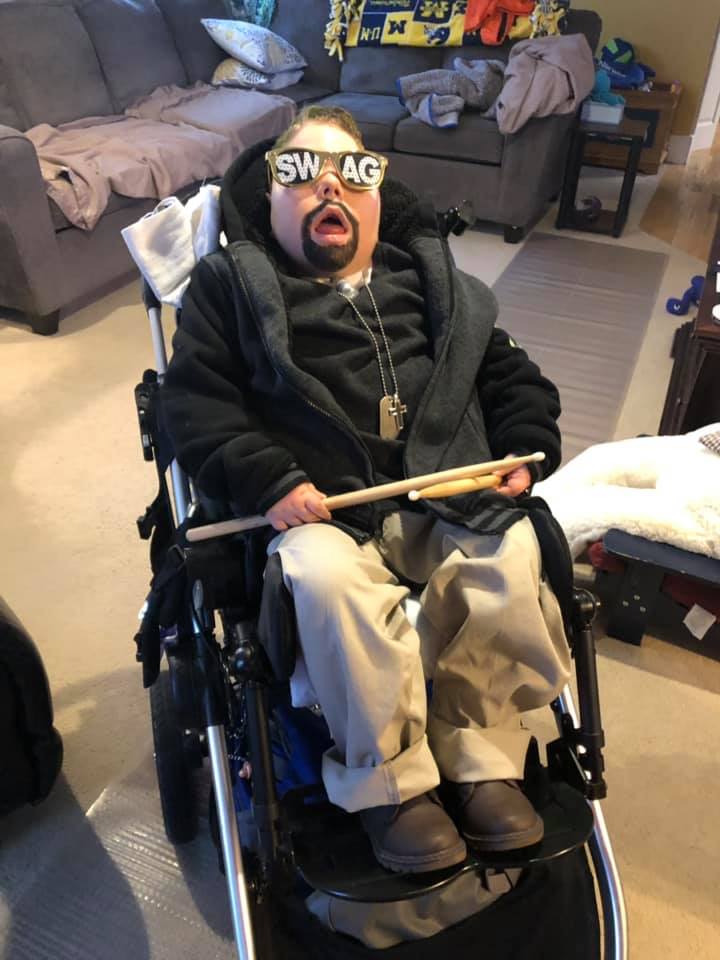 I mean seriously, is this the best Halloween costume or what!?! 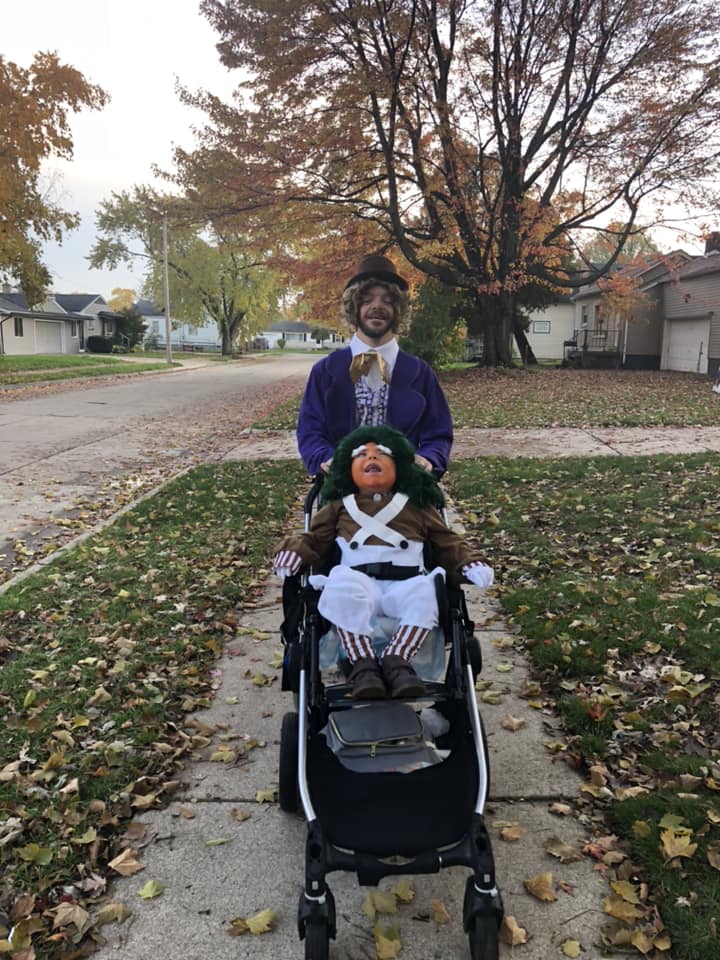 Aiden and his family, MFH and myself have met up 3 times over these past 5 years.  The first time we met was in 2016 when MFH and I were driving home from running Grandma’s Marathon.  We stopped by to meet everybody and grab dinner. 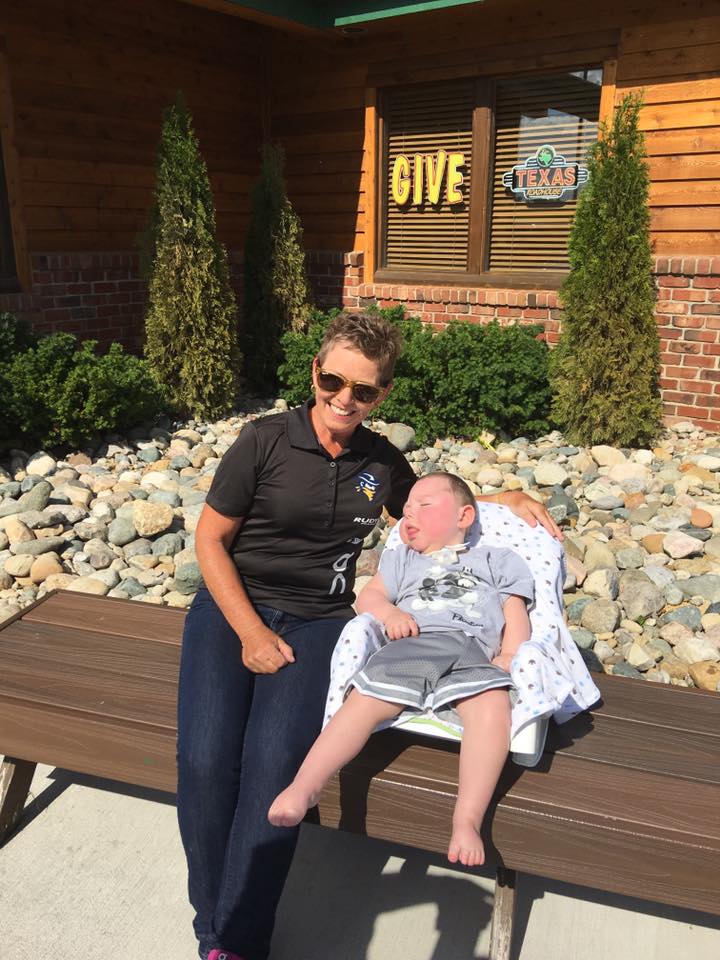 The second time was in 2018 when Aiden, his parents and grandma stopped by our place in Mississippi!  We had so much fun!!!  We toured an Antebellum House, of course had dinner a few times and I had some race bling I’d been hanging onto to give to Aiden during their visit! 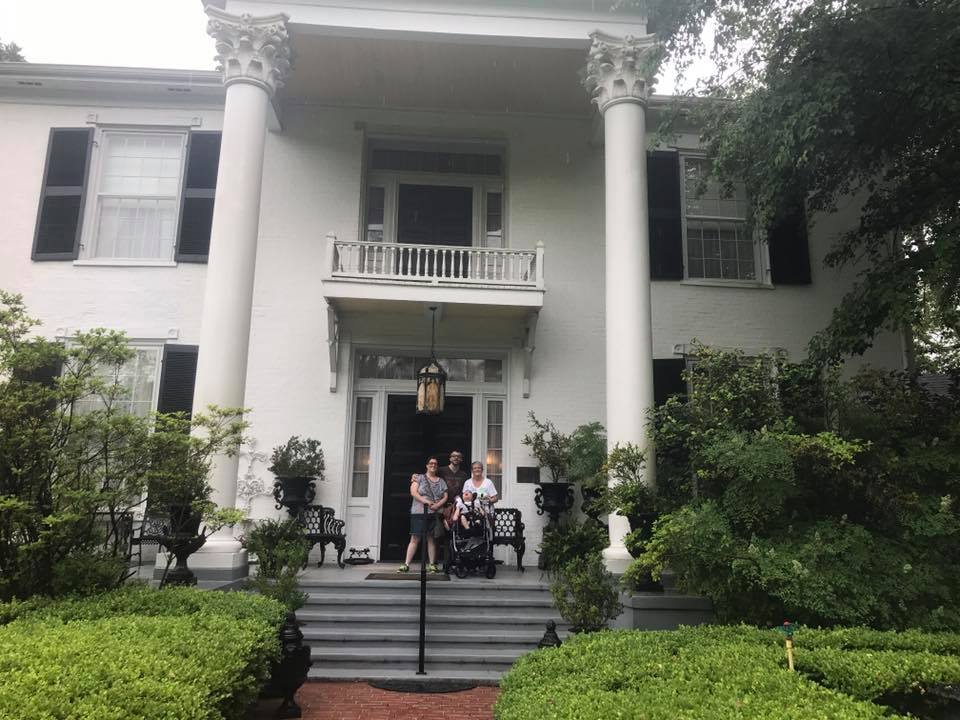 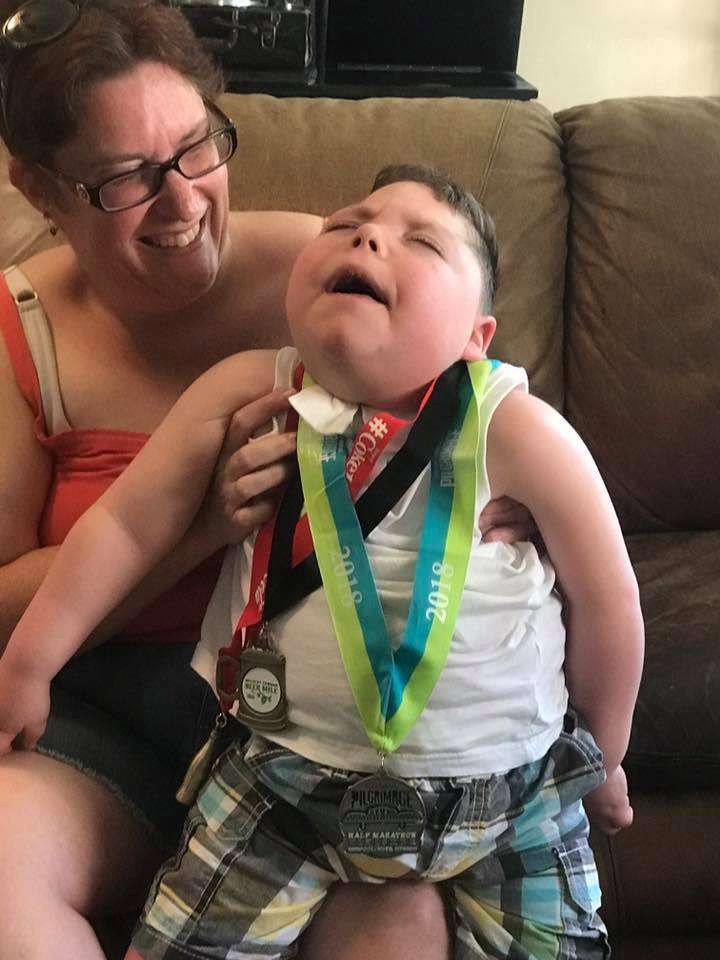 The last time we met was just this last October!  Now this was exciting stuff because Aiden and his dad ran their very first race at the Detroit Free Press Marathon!  We all ran the 5k together the day before the marathon.  Y’all, Aiden earned his first ever, very own bling!!!  How awesome is this!?! 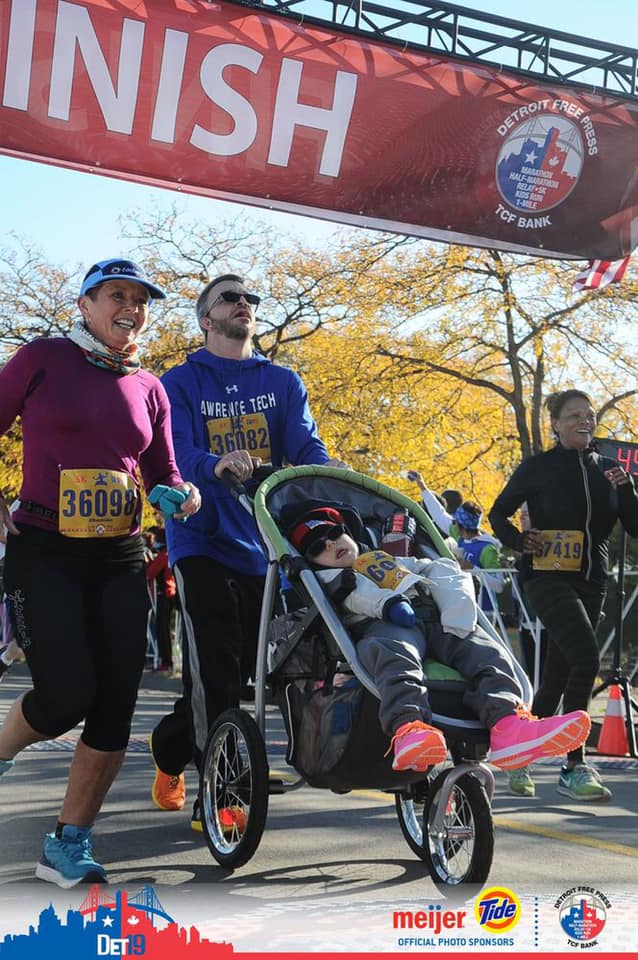 The next day at the marathon, we all met at the finish and I was able to give Aiden his race medal at. the. race. instead of mailing it off to him.  Coolest thing ever!!! 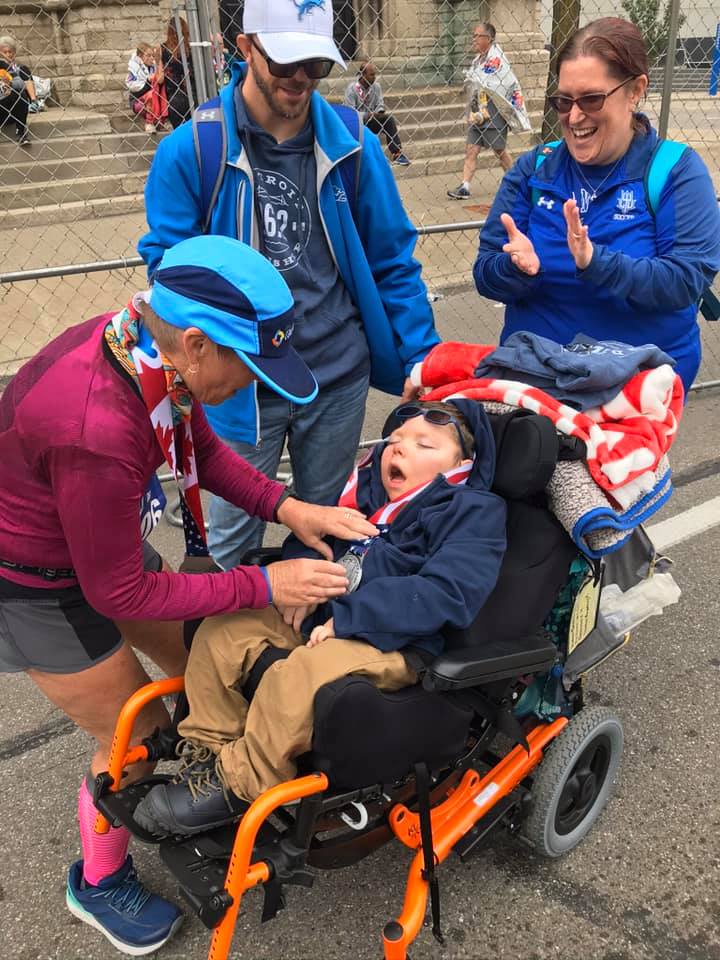 Aiden and I ran Tunnel Hill 50M this past November.  We ran the Yeti Winter Trail Series during this past winter.  He was very patient with me while I tried to learn this winter trail running stuff.  I’m getting better but need tons more practice! 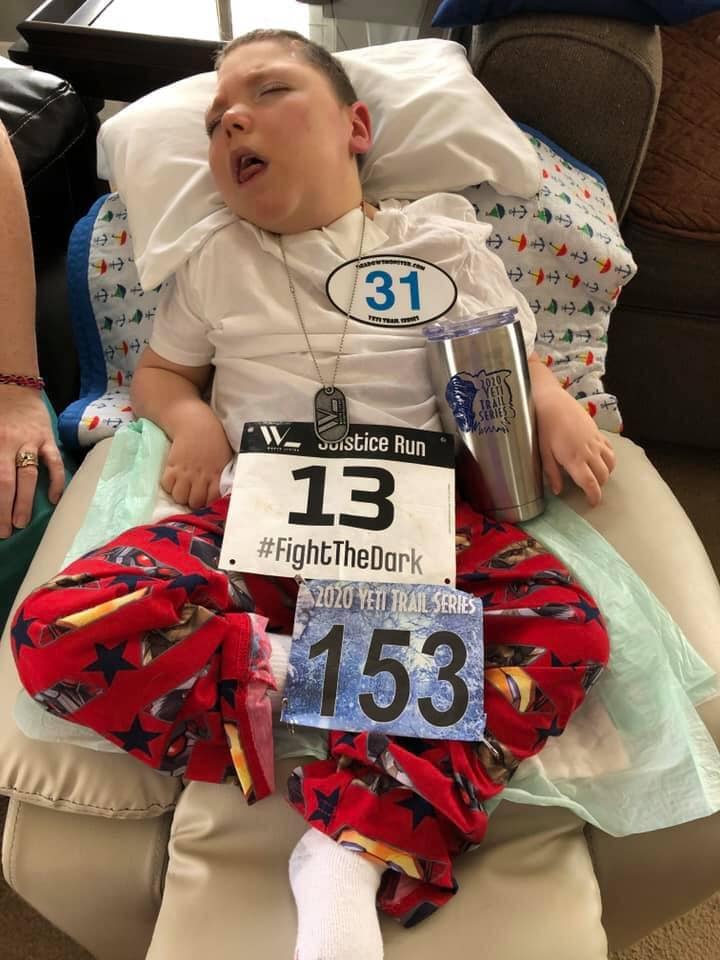 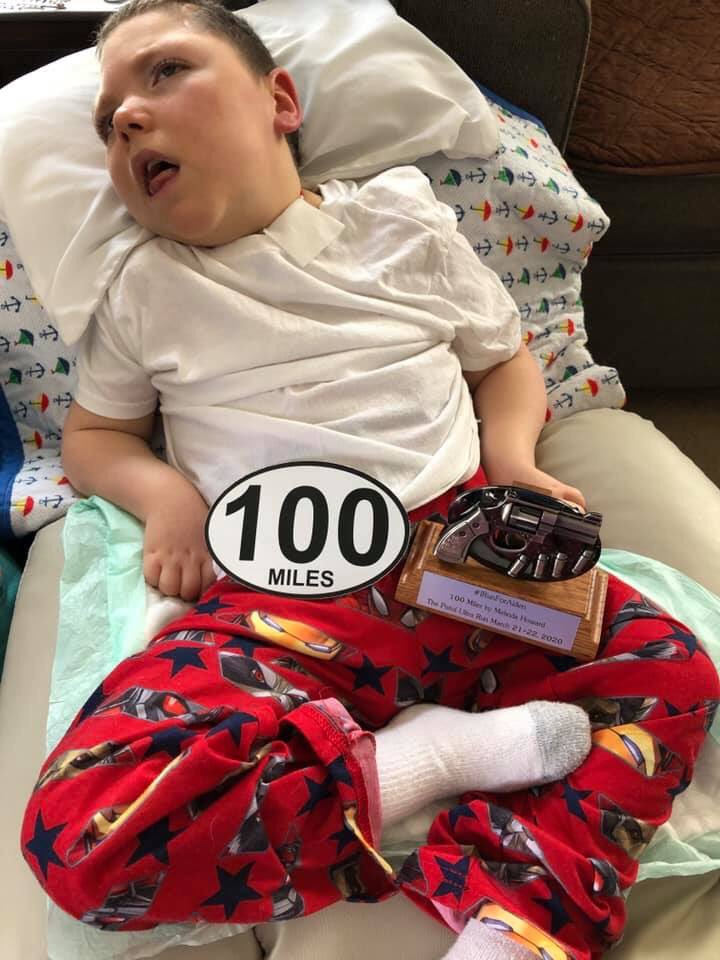 Aiden, we’ve packed a whole lot of stuff into our 5 years as buddies!  We celebrated your first 2 birthday’s as buddies in Germany.  We’ve had fun running in London.  We’ve run all around the US and in Canada AND, if they don’t cancel NYC  Marathon, we’ll be running there this fall!!!  We’re just running machines, you and I!

And don’t you think I’ve forgotten about your two beautiful and sweet angel sisters! I know I don’t mention them often but I’m running for them, too.  They love you and do such an amazing job watching over you from heaven!

Love you with all my heart, Aiden and I’ll never be able to thank you enough for letting me be your runner.  It is an honor and a privilege to run for you!!! 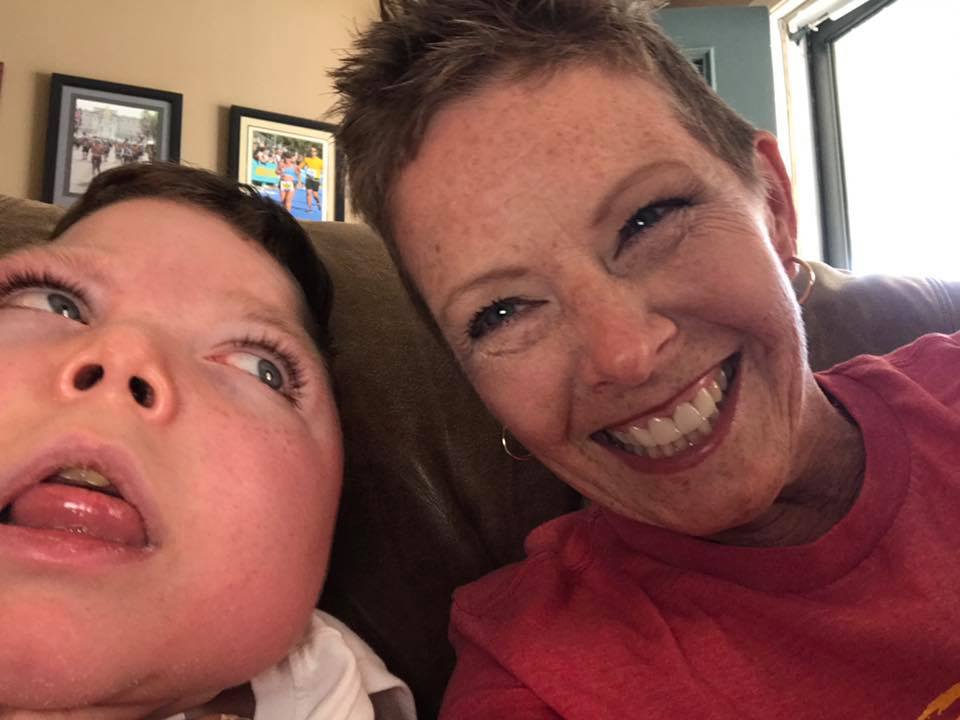