Before we went to London we were advised to secure something called an Oyster card which you load up with money in advance and use on the underground (subways) and buses.  Doing this you get a lower fare rate.  We each got one with 50£ on it.   I think my card still has about 12 £ on it.

And we got a lot of use out of our Oyster cards while we were there.  The first few days we stayed at a hotel in Stratford City right near a train/bus station.  The transport people have a website that makes it very easy to plan trips from one point to another.  And we also had some instructions from the marathon people about how to get to the “expo” at the Excel convention center.  So that was our maiden voyage on day #1.  I think we went somewhere at least once every day we were there.

All of the stations had a system map and in the train cars themselves there were system maps and line maps.  The thing is broken up into lines and we frequently had to take one line for awhile and then transfer to another line to get to our destination.  The stations always seemed to have bus connections. We probably could have taken the bus more frequently, but the stations we went to were only half a mile or so apart so we just walked from the station to the end point all except for our trip to the Royal Observatory on day #2.  Of course the bus was a red double-decker job.

Back to the Oyster card:  there are turnstiles at the stations for going in and out.  You have to scan your card at the beginning and end of every trip.  If you forget to scan on the way out they charge your card for the maximum fare on that line.  The buses have scanners when you get on but you don’t have to scan when you get off the bus.

I’ve been on train-like transit systems in Chicago, Toronto, Berlin and now London.  I think the London one was acceptable.  It was convenient, clean, and safe (the latest we were on it was about 10:30 PM).  I thought it was kind of noisy.  It was definitely well-used by the populace.  The seats were comfortable but we frequently had to stand.  I thought it was interesting that most of the lines used a 2-rail DC power system; but some lines used single power rail systems.  The stations were nice.  I thought some of them were a bit tricky to find.  But with cell phone and GPS that isn’t very much of an issue these days.  Our “home” station in Stratford was a big station with a lot of systems/lines coming into it and I found it somewhat daunting.  More than once we were surprised where we came out into the open having attempted to go a particular direction.

We had a couple of opportunities to ride the overhead-electric National Rail system too.  That system touches at some of the Underground stations so you can switch between the two.  The cars were larger and the seats were more comfortable.  But it was also much more expensive and went longer distances.  The last few days we were in-country we stayed with some people in Bishop’s Stortford and a round-trip ticket into London from there was about 20 £. 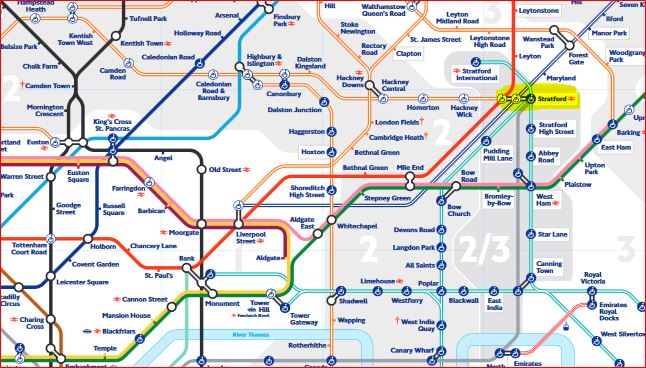